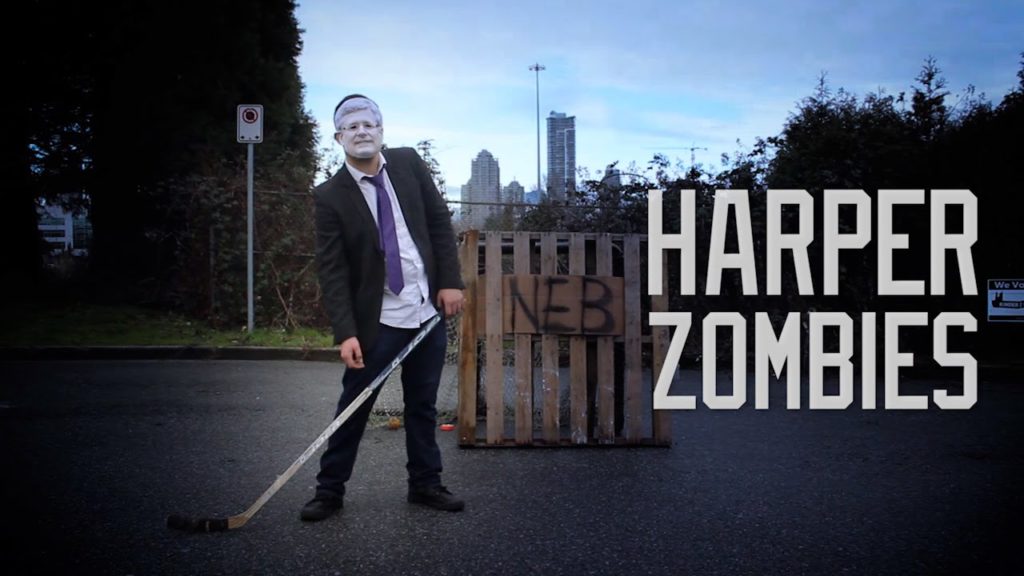 Kinder Morgan Shambles On Thanks To Zombie NEB

Around the Dogwood water cooler, we call the NEB a branch of the Zombie Harper Government (ZHG). That’s because Conservative appointees will be running the show until 2020. The ZHG equals the same industry insiders and Conservative donors leading the same flawed process; a regulator not only captured by industry, but given its marching orders by a dead government from beyond the grave.

Yesterday the province of British Columbia began to fight the plague, formally stating its opposition to the Kinder Morgan pipeline expansion in its final submission to the National Energy Board.  With our provincial government now officially opposed to the Trans Mountain expansion, Kinder Morgan faces a massive wall of public, First Nations, and government opposition to its oil tanker plan.

But that’s not what’s happening. So far the Liberal government has done nothing to fulfill its election promise to revamp the discredited review — and we know if nothing changes, the NEB will approve the Trans Mountain expansion. Never mind new scientific evidence on the special hazards of diluted bitumen, or the opposition of the province where the pipeline meets tidewater.

The ZHG still reigns over energy decisions in Canada and Kinder Morgan keeps coming. The peculiar pestilence unleashed to animate such proposals well past their natural expiry date has deeply infected our centres of power. “Sunny ways” in Ottawa have so far failed to cure the rot.

The NEB, a public body charged with keeping industry on the straight and narrow, has perverted the principles of procedural fairness and natural justice in an effort to keep the monster moving.

Reading through the Province’s submission it is less the failings of Kinder Morgan’s application that draw your attention than the fact a document so full of omissions, redactions and unsubstantiated claims could ever have shambled along so far in the first place.

No justification is provided for the shortcuts KM takes on pipeline monitoring and spill prevention. There is no evidence backing up the efficacy of its leak detection systems. Kinder Morgan’s Emergency Management Program is so heavily redacted, the province’s civil servants have no way to assess its effectiveness. Worse, Kinder Morgan makes misleading claims about the response to previous spills along the Trans Mountain line. Lessons learned from the difficulty of cleaning up Enbridge’s diluted bitumen spill in Michigan go unheeded and the particular problems of cleaning up the sinking goop in B.C.’s sensitive and fast flowing salmon rivers remains unexamined.

Unsurprisingly, the NEB is fine with all of this. The Board has ruled that Kinder Morgan has filed sufficient information to make a final decision.

On its own, the province’s submission isn’t quite a zombie killer — but it can help inoculate B.C. against the brain rot being spread by the ZHG. When Kinder Morgan’s pipeline is approved by the board in May, we’ll see to what extent our new government in Ottawa has been infected.

Rest assured, B.C.’s brave defence squad has been honing its skills for the last four years. With the provincial government joining the team this week, our odds have never looked better. The Zombie Harper Government will eventually be stopped — and these undead pipeline projects slain.