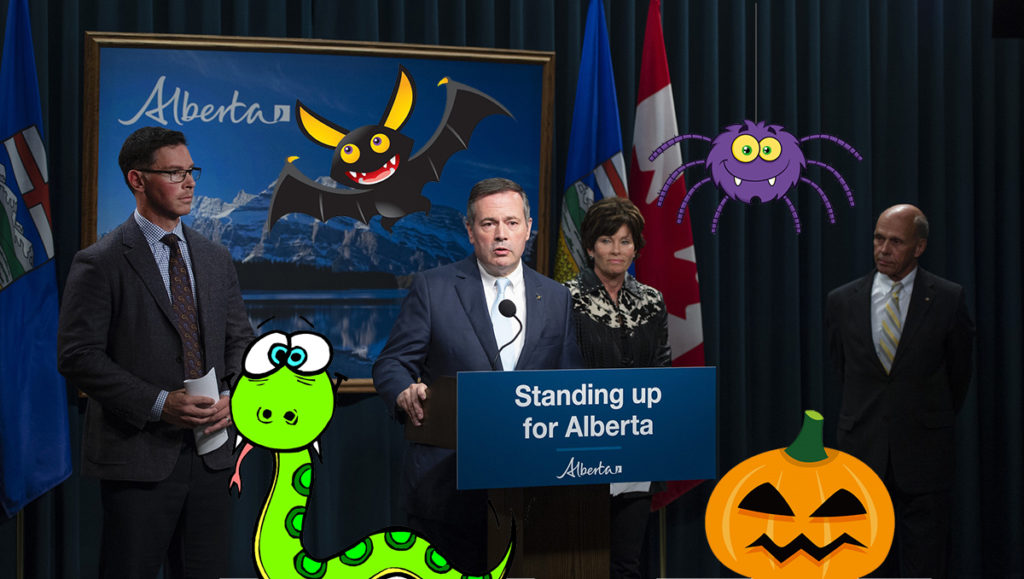 Be afraid. And get angry. That’s the message from the Alberta government to oil and gas workers, and their families, as they face automation, layoffs and a worldwide transition away from fossil fuels.

But even after running a one-sided, secretive inquiry that never interviewed the groups targeted, Allan found that organizations like Dogwood were motivated by sincere concerns about oil spills and climate change – and most importantly, did nothing wrong.

His tally of outside funding for these campaigns was $3.4 million a year between 2003 and 2019. That’s a tenth of the annual budget of the Alberta government’s own “war room,” never mind the billions in foreign funding pouring into coal, oil and gas expansion in Canada.

After two years and millions of dollars spent, the inquiry failed to deliver the ammunition the politicians were hoping for. So Jason Kenney and his energy minister, Sonya Savage, went right back to their old talking points.

“Ethical Oil” all over again

“The world is in an energy crisis, with a shortage of oil and natural gas,” Savage said in her news conference releasing Allan’s report. “Alberta could have helped. Instead countries like Russia and Saudi Arabia have been given a strategic advantage.”

It feels like the Alberta government is stuck in the 1950s, complete with Cold War scaremongering and McCarthyist tactics aimed at their list of enemies.

And that’s the point. Kenney and Savage need to distract their voters from the pile of international reports begging Canada and Alberta to reduce oil and gas extraction. They can’t let workers start to question why their government has no transition plan.

This inquiry wasted two precious years on the precipice of climate disaster. The deeply flawed draft report was sent to Dogwood and the other groups named just days after a deadly heat wave killed hundreds of British Columbians, and the community of Lytton burned to the ground.

As world leaders gather once again for climate talks aimed at ratcheting down global emissions, Jason Kenney is trying to demonize the very people calling for a safe future.

A note about the numbers

The commissioner identifies $1.28 billion in grants for all environmental projects and campaigns relating to Canada between 2003 and 2019. $352 million stayed with U.S. groups fighting fossil fuel projects, like pipelines, that originate in Canada.

Hundreds of millions went to duck hunting projects. Waterfowl cross the Canada-U.S. border, and so do charitable dollars for things like wetland enhancement. Hundreds of millions more went to other environmental initiatives across the country that have nothing to do with fossil fuels.

Allan added up $54 million in grants over 16 years that he suspects, but can’t prove, helped constrain Alberta oil and gas expansion. That averages out to $3.4 million a year. By contrast, the Alberta War Room launched with a $30 million-a-year budget.

Previous reports have found the majority of oil production in Canada is American-owned, with untold millions spent on lobbying, political action and advertising, and billions in profits flowing out of the country to foreign shareholders every year.

Despite being vastly outgunned by international oil and gas companies, organized local citizens and Indigenous communities have scored impressive victories against some truly disastrous projects. If anything, we need to ramp up those efforts in the face of the climate emergency.

“While anti-Alberta energy campaigns may have played a role in the cancellation of some oil and gas developments, I am not in a position to find that these campaigns alone caused project delays or cancellations,” Allan writes in his report.

He’s correct. All the campaigns against coal, oil and gas expansion in North America come at a time of huge economic transition, as investment migrates from fossil fuels to renewable energy.

And we need to build on that momentum, regardless of whether the leaders of a neighbouring province choose to drag their heels.

Dogwood is a B.C. organization focused on decarbonizing, decolonizing and democratizing the province where we live. Our climate campaigns are focused on fracking in B.C. and pipelines that cross B.C. As always, we get the large majority of our funding from individual supporters like you.

If you’re curious about the environmental foundations that support our work, we list them every year in our Annual Report. For a more detailed response to the contents of the Alberta Inquiry’s draft report, here’s what we wrote in July.