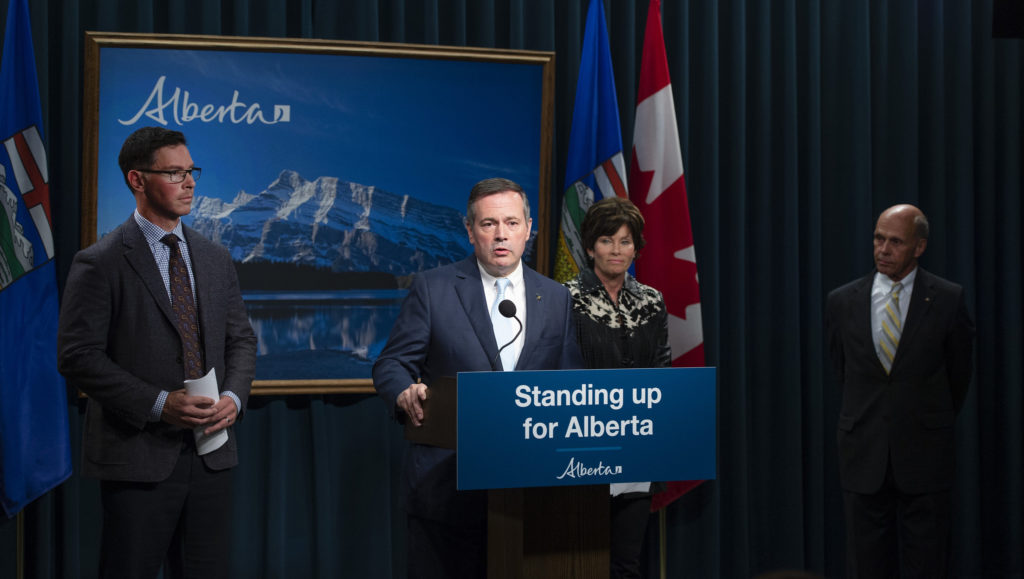 In September 2019, oil evangelist Jason Kenney launched a witch hunt – complete with a snitch line, a bully pulpit and a taxpayer-funded public inquiry.

Kenney isn’t targeting women suspected of using black magic, like the Puritans of the 1600s. Or supposed Cold War Communists like infamous U.S. Senator Joseph McCarthy. He’s targeting everyday people like you and me who care about the environment and the future of our planet.

Alberta’s premier has Dogwood and our allies on a dartboard, with a bullseye right on our forehead.

An attack on free speech

Kenney hired Steve Allan, the board chair at Calgary Economic Development, to investigate any group deemed to have “disseminated incomplete, misleading or false information about the Alberta oil and gas industry”. Incomplete according to whom?

A public inquiry has the power to subpoena witnesses anywhere in Canada. This means at exactly the moment we need to put all of our collective energy into solving the climate crisis, we’re going to have to lawyer up to defend your right to free expression.

Feeding this so-called investigation is a snitch line, where every Internet troll and conspiracy theorist can report their most-hated environmental and Indigenous activists for suspected anti-oil activities. This may be political theatre, but it’s going to have real consequences for our friends and allies.

After word that a taxpayer funded-attack against environmental groups was forthcoming, Kenney told a room full of oil executives he’s ready to crush their critics. “[Climate activists] know they couldn’t get away with this in Vladimir Putin’s Russia. In fact, Greenpeace did do a protest on an offshore rig in Russia and their crew was arrested and thrown in a Siberian jail for six months.” Kenney called that story “instructive”.

(He got the facts wrong, by the way, but the CEOs didn’t care. They chuckled along anyway.)

The Ministry of Propaganda

As this Kafkaesque nightmare unfolds, Postmedia will be working to give Kenney’s extremist moves an aura of legitimacy. The nationwide media chain that owns the Vancouver Sun, The Province and dozens of other papers has adopted an explicitly conservative agenda with a steady stream of articles attacking climate activists, Indigenous rights, Muslims and refugees.

Postmedia has “partnered” in the past with the Canadian Association of Petroleum Producers, renting out its pages for unmarked oil company propaganda. But it’s not just industry cash keeping Postmedia afloat.

The chain can expect millions in taxpayer cash from the federal government’s newspaper bailout. And Postmedia lobbied the Kenney government to be part of his anti-environmentalist “war room”. That’s right, Canada’s biggest newspaper chain plans to use public money to serve as a bully pulpit for Big Oil.

The great irony is this investigation is meant to weed out supposed foreign interference in Canada’s oil industry, ignoring the fact that it’s the oil companies that are global. Their pollution is global, their profits are global. But they know Kenney’s base hates the word “foreign”. So they wrap themselves in our national flag – and accuse you and me of being traitors.

It’s un-Canadian. We’ve had enough. It’s time to defend our communities and our rights.

Canadians are coming around to the fact that we have to stop growing the fossil fuel industry. That has oil companies lashing out in panic. With your help, we can expose this vindictive witch hunt for what it is.

When subpoenas arrive at our office, we do not plan to go quietly. We hope you’ll join us in speaking up even more forcefully for what we believe in — like ending taxpayer handouts to Big Oil and supporting young leaders taking part in global climate strikes. And, if you can, we hope you’ll chip in to our legal fund so we can defend the right of everyday people to stand up against oil companies in the middle of a climate crisis.