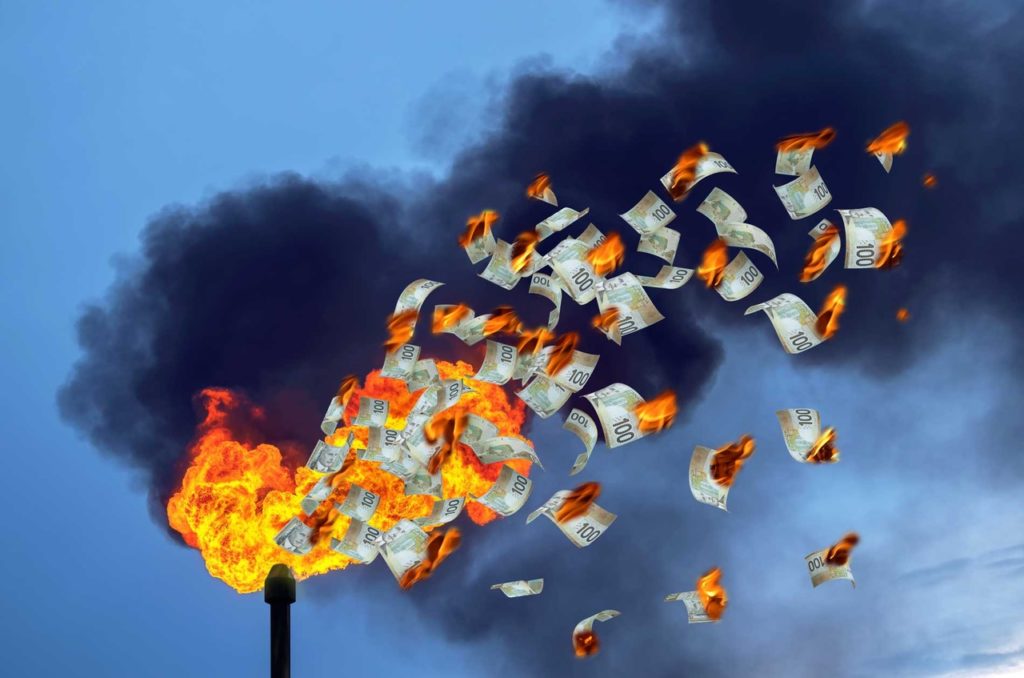 How we could stop fracking

Everything you need to know about B.C.’s natural gas royalty review

This is climate chaos. This is corporate colonialism. In B.C., both are fuelled by government-funded fracked gas companies. It is past time to cut them off.

We have a chance to do that right now through the provincial government’s royalty review, which is effectively a public consultation on the largest taxpayer handouts propping up the fracking industry. It’s not a silver bullet, but it is a real, rare opportunity to push this government to stop using our tax dollars to violate Indigenous rights and make the climate crisis worse.

If you’ve got one minute, use our easy website tool to have your say. If you’ve got five minutes, and want to maximize the impact of your submission, here’s a quick Q&A with everything you need to know about the B.C. natural royalty review and why it matters. Bottom line: If we get this right, we could send fracking companies packing, fight climate change and save billions of dollars for the things British Columbians need most.

What is the royalty review?

Following widespread public pressure opposing fossil fuel subsidies during the 2020 provincial election campaign, the NDP committed to reviewing oil and gas royalties. In October, the government released an expert assessment that confirmed that the current system is “broken,” is a bad deal for British Columbians, and is not serving the province’s environmental and social goals.

But what kind of system will they replace it with? A discussion paper lays out the options the government is considering, including the good, the bad and the ugly. Public comments are invited from now until December 10. The outcome of the review is expected by March of next year.

Why does it matter?

The royalty review is a litmus test for the NDP’s climate credentials at a critical moment. It comes a month after the government was widely criticized for failing yet again to tackle fracked gas emissions in its updated CleanBC plan, and in the midst of an unprecedented climate disaster. And it will fundamentally shape the future of the oil and gas industry in B.C. So although it is undeniably dry and technical, it also really matters.

What are royalties and royalty credits?

Royalties are the fees oil and gas companies pay to the provincial government to access publicly-owned gas resources. Royalty rates are based on the volume of gas that is extracted, and the market price of natural gas. A series of deductions and credits, specifically designed to subsidize fracking, unprofitable wells and new exploration that would otherwise be not economically viable for companies to pursue, reduce the royalties that companies have to pay. Companies can also stash credits to reduce payments in future years.

As natural gas prices have tanked, so have royalty rates and revenues to the province — even as gas production has ramped up. Meanwhile, the government is handing out credits faster than companies can cash them in, which means the Deep Well Royalty subsidy alone has racked up $3.1 billion in unclaimed credits.

Frackers win, we all lose

This chart shows how companies like Dutch-owned Shell and Malaysian-owned Petronas pay next to nothing in royalties and B.C. taxes when compared to the handouts they’re getting in the form of royalty credits — let alone their eye-popping profits.

When you add in a stack of other subsidies like breaks on the carbon tax and PST, road and infrastructure funding and straight-up cash for LNG Canada, last year B.C. handed out $1.3 billion to oil and gas companies — five times more than the $282 million it got back in royalties, and way more than it spends fighting climate change.

The entire royalty system is set up to encourage more fossil fuel production — and British Columbians are getting royally ripped off in the process. We need to flip that around.

Here’s what we’re calling on the B.C. government to do as it overhauls its broken royalty system:

Step one is to abolish the Deep Well Royalty credit and all other subsidies embedded in the current system. This includes schemes like the Clean Growth Infrastructure Royalty Program. It might sound nice, but it’s helping companies drill more fracking wells than they would without the handouts — and polluters should pay to clean up their own messes.

We’re in a climate emergency. It’s outrageous that these subsidies have continued as long as they have, and they should be gone in time for the 2022 budget. The government should also take this opportunity to commit to ending all fossil fuel subsidies in the province.

Premier Horgan says the new royalty system should help to reduce emissions as part of B.C.’s climate plan. If he’s serious, the province should jack up royalty rates to reflect the true environmental and social costs of fracking — and continue to raise them over time to discourage new gas wells, as part of the phase-out of the industry that scientists around the world are calling for. Higher rates would change investment decisions along the entire supply chain, from fracking and pipeline companies to LNG export terminals.

A royalty system designed to shrink rather than expand the fossil fuel industry could be the most powerful tool in the government’s climate action toolbox, if they chose to use it.

In accordance with the BC Declaration on the Rights of Indigenous Peoples, the new royalty system must be developed in full partnership with traditional and elected Indigenous governments whose territories are impacted by the extraction, transport and export of gas. A modern understanding of the concept of royalties — fees paid for a resource claimed by the Crown — should also share the revenue from royalties collected with affected First Nations.

Stop giving away our water

The fracking industry pollutes 27 billion litres of fresh water every year. Companies suck water out of lakes and rivers, add a toxic soup of chemicals, and blast it into the ground to shatter the rock and release the gas. Once the water is used, it’s so polluted it can’t be ‘treated,’ so it’s pumped underground and lost from the water cycle forever. Under wildly outdated regulations, and unlike other industries, fracking companies pay almost nothing to the province to ‘use’ (a.k.a. poison) our most precious resource.

It’s time to end the fracking industry’s free ride, by setting royalty rates that account for the water they pollute.

The government is asking the public some pretty technical questions on its official consultation feedback form. You don’t have to answer them for your submission to count or to make an impact. What matters most is that you make a personal comment in your own words, whether you do it on the government’s site or ours. But along with the discussion paper, the government’s questions offer glimpses into what provincial officials are hearing from industry lobbyists, and the uphill battle we’re facing to get a good outcome from this review. With that in mind, and for the keeners out there, here are some common sense answers:

Balancing environmental protection, a fair return to the public and economic development

Protecting the environment by reducing emissions, and investing in the low carbon economy instead of propping up the fossil fuel industry, is the way we will secure B.C.’s long term economic prosperity. We only need to look at the billions in damage from last week’s flooding to see the costs of climate inaction. There is plenty of evidence to show that betting big on a sunset industry like fracked gas is setting up the B.C. workers and towns built around it for equally big losses. And northern communities have no shortage of proposals for how to chart a new economic future for themselves — but they need financial resources that are currently going elsewhere to make it happen.

Unfortunately, the government continues to misleadingly emphasize the revenue from oil and gas royalties to the public purse (remember, it’s five times less than B.C. gives out in subsidies), and the industry’s importance to the provincial economy — but oil and gas provides just 0.5 per cent of the jobs in B.C.

The discussion paper also twists the concept of a ‘fair return’ to the public beyond recognition. Instead of referring to sharing the value of B.C.’s gas resources more fairly between private companies and the public, fair return is described as maximizing the size of the ‘economic pie’ by encouraging more gas production and therefore — in theory — more money overall to go around.

Here’s where some eyes will really start to glaze over — but we think Option 1 presented in the discussion paper (a flat rate on gas production) would be the best outcome. The discussion paper makes it clear that Option 1 is the most transparent, and would likely drive down gas production. Meanwhile, Options 2 and 3 both involve ‘capital cost recovery’ — in other words, an unacceptable transfer of the financial risk of new drilling and gas infrastructure from fracking companies to the B.C. public.

At last, an easy one. The new royalty rates should kick in right away, rather than allowing wells drilled under the existing unfair royalty system to be ‘grandfathered in’ for years to come. We also need to deal with the $3.1 billion in stockpiled royalty credits as quickly as possible — without paying out fracking companies now or forfeiting the future revenue that’s owed to the public. 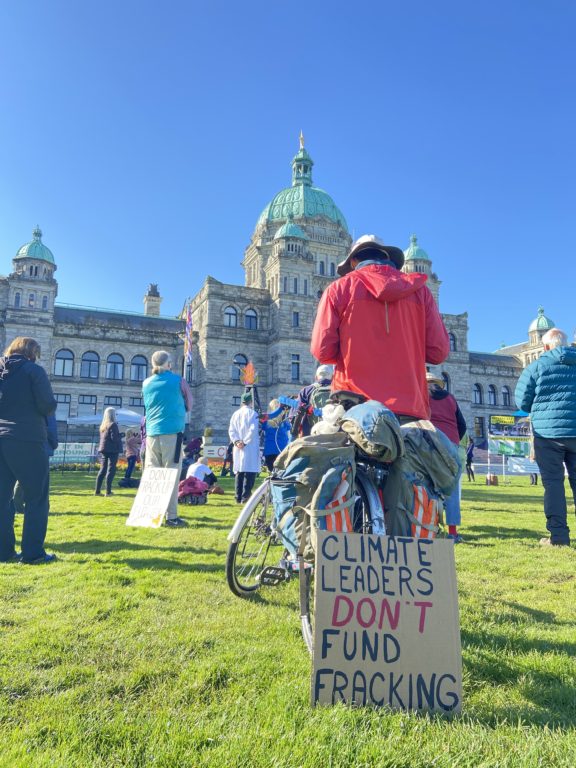 I believe we have a real shot at ending the royalty credits that make up the biggest provincial handouts to oil and gas companies through this review. The BC NDP knows this is a problem issue for them, and the Premier is on the record saying he wants the new system to eliminate ‘inefficient’ fossil fuel subsidies.

‘Inefficient’ is a weasel word that could mean getting rid of some of the handouts, but paying companies to clean up their operations while fracking for ever more gas. And if we see an end to subsidies, but royalty rates are set at fire sale prices that unleash a fracking bonanza, we won’t be much further ahead.

The discussion paper makes it clear that industry is pushing hard to hang on to their sweetheart deals, and the government is clinging to old Christy Clark era myths about LNG as a clean fuel and a cash cow for B.C. The paper also embodies the paradox at the heart of the NDP’s climate policy: the belief that they can reduce greenhouse gas emissions while expanding oil and gas.

If British Columbians don’t speak out, there’s a real risk that the government could roll out a new royalty red carpet for frackers. But if enough of us flood this consultation, and make it clear that this review is a litmus test of the NDP’s climate commitments, we can drown out the corporate lobbyists and push the government towards a fairer, safer, cleaner path.

Have your say – submit your comment to the B.C. royalty review here

7 Responses to “How we could stop fracking”