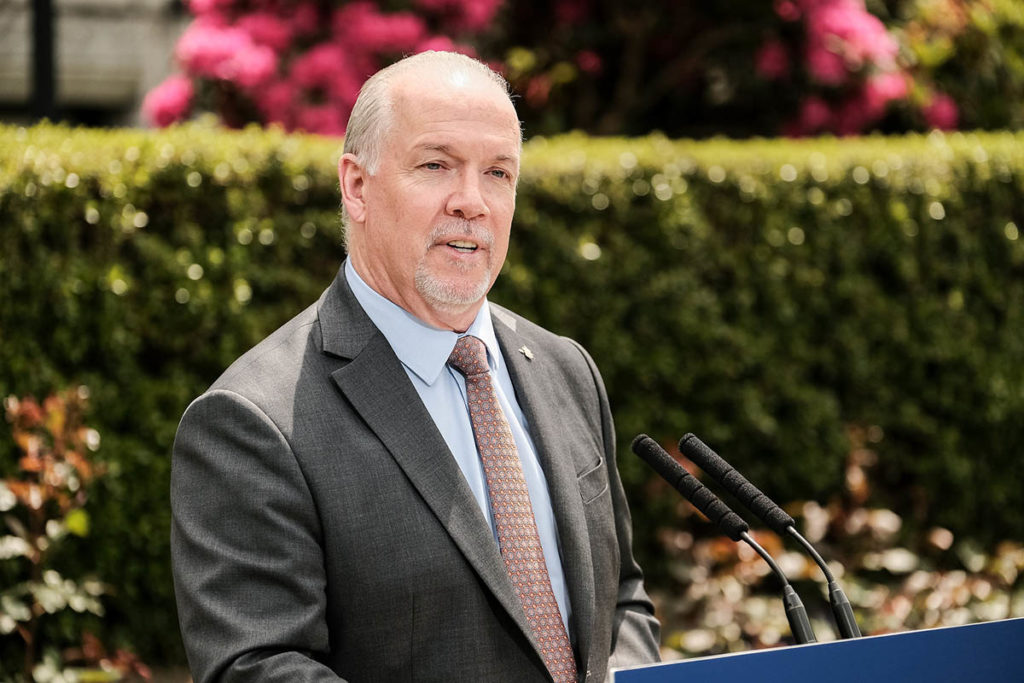 B.C. Premier says he wants to hear from British Columbians where COVID-19 recovery spending should go

The B.C. government is pressing ahead with its Clean BC climate plan – and implementation of the Declaration on the Rights of Indigenous Peoples Act – despite challenges posed by the COVID-19 pandemic, ministers told climate and conservation leaders earlier today.

When asked if there was a provincial bailout planned for the fossil fuel sector, Premier John Horgan said “we have no expectation of increasing resources to oil and gas”. Dogwood was one of the groups invited to the hour-long roundtable on pandemic relief and recovery spending.

Horgan’s response will be welcome news to grassroots British Columbians who have pushed back hard on demands from the Canadian Association of Petroleum Producers and other industry groups clamouring for regulatory rollbacks and more government cash.

Finance Minister Carole James and Environment Minister George Heyman also joined the meeting. James confirmed that the government has so far allocated $1.5 billion for economic recovery under its COVID-19 Action Plan. That money sits outside the regular provincial budget. Cabinet ministers will decide how and where it is spent.

Dogwood and allies strongly urged the government to prioritize projects that can put people back to work safely, fight climate change and make our communities more resilient to future crises. Sign our petition to B.C. ministers here.

The Premier said he shared those goals. When asked what kind of recovery projects he had in mind, Horgan mentioned the Patullo bridge replacement project, public transit expansion in the Lower Mainland and flood protection along the Fraser River. With spring snowmelt already bringing high water levels around the province Horgan said now might be the time to consider investments in big projects like diking.

Minister Heyman added that programs currently housed under Clean BC could be expanded if they provide good job creation opportunities – including building retrofits and home energy efficiency upgrades.

However, there was no discussion of renewable energy projects. The Clean BC plan mandates that by 2040, all new cars and trucks sold in the province must be zero-emissions vehicles. University of Victoria researchers calculate that to electrify all vehicles in the province, B.C. will need to double its electrical generation capacity.

There was also little time to discuss forests, which are by far the biggest contributor to B.C.’s greenhouse emissions. In part driven by climate change, beetle kill and forest fires release methane and carbon dioxide on a scale that dwarfs other sectors like transport or housing.

Some groups on the call recommended ecosystem restoration projects that could enhance salmon and wildlife habitat, reduce risk from floods and fires, and put thousands of British Columbians to work outdoors in the months to come.

Horgan said he’s asking all ministers to canvass stakeholders for projects and proposals, including the environment minister. But that means traditional industries will also be jockeying for their piece of the $1.5 billion – as well as federal infrastructure dollars.

It’s encouraging that the provincial government isn’t earmarking any additional money for fracking companies or pipeline bailouts. But it’s equally clear that B.C. communities will have to organize and fight for projects that do more than just bring back employment.

We want people to have meaningful, well-paid work in every corner of the province. We also want to make sure the projects funded by our governments reduce greenhouse gas emissions. We need to enhance people’s security – access to food, decent housing, protection from natural disasters – while making sure we prioritize communities that were already in crisis before COVID-19.

If you have ideas for projects and programs in your part of the province that are shovel-ready or “shovel-worthy,” please add them in the comments section below and we’ll make sure they get to cabinet ministers. And if you haven’t signed Dogwood’s petition for a green recovery, please add your name here.

10 Responses to “Horgan sticking to climate plan despite pandemic”