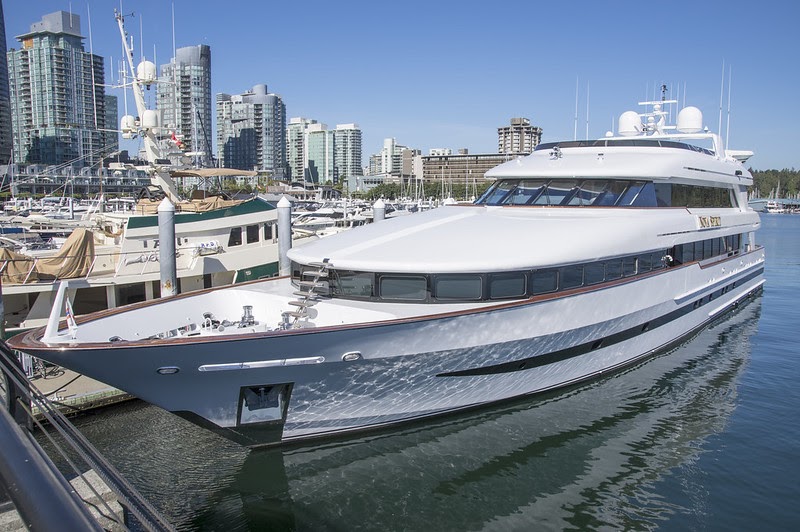 Rich corporations are hoarding money, and taking ours too

How many mega yachts will it take to completely topple society?

I was at a small gathering recently and overheard someone talking about Jim Pattison — aka “Canada’s Warren Buffet” (apparently). The conversation was about his mega yacht, the Nova Spirit, and how rumour was Pattison has never himself spent a single night on the vessel. Not once.

The boat is valued at $25 million and is a sight to be seen — 147 feet long (that’s almost half the length of a football field), it has played host to some of the richest and most famous people in the world (Oprah, for one) and costs an estimated $72,000 just to fuel up. But even it is small compared to yachts owned by other Canadian billionaires, like that of John Risley. His floating palace, Northern Star, is docked on the east coast and was valued at $160 million when he bought it.

Our country is literally bookended by mega yachts.

It’s painfully clear that for too long in Canada, wealth has been accumulating amongst a small minority of people under a loosely checked system of money hoarding and American-style corporate greed.

On top of that, government has been doling out our tax dollars hand-over-fist to make sure these same people stay right where they are: filthy rich. It has to stop.

Not far from Coal Harbour where Jim Pattison keeps the Nova Spirit, people are dying in the street. Greed, poverty, inequality, and bad policy have fuelled homelessness and drug addiction. Across this province, people are losing their jobs because of COVID-19. Families are struggling to make rent, pay bills or go to school while working two, three, four jobs.

So when I hear people talk about what a great philanthropist Pattison is, or any billionaire for that matter, it makes my stomach turn.

I’m sure thousands of people have been helped by Pattison’s donations — $75 million to build the new St. Paul hospital is nothing to sneeze at. But… he has billions and billions of dollars more at his disposal. No one seems to be asking about the 50 more hospitals he could have built with the hundreds of millions he’s spent on thermal coal exports or buying up ever more car dealerships.

Even a few more billion given in donations or paid in taxes would still leave him with roughly $1.5 billion to buy more rich guy stuff, like a second yacht he doesn’t sleep on.

Billionaire philanthropy today is not rooted in ensuring wealth distribution or civic responsibility. It’s a self-serving endeavour meant to bring notoriety and good PR to wealthy people (like naming the building you “donated” after yourself). This kind of charity is designed to keep capitalism in place. If capitalism didn’t exist, then charity wouldn’t be needed. And of course, let’s not forget, tax “relief”.

Obscene billionaire earnings have become a hot topic, especially in the United States where profits for the rich have ballooned during the COVID-19 pandemic hit. It’s fair to assume this is happening in Canada, too. But the rich getting richer is nothing new. What is new is the way rich people are being taxed. Or not being taxed, rather.

Rich people were not always so averse to paying their fair share. In the United States, it was a Republican president who introduced income taxes. At the time, they were just for the wealthy. The richer you were, the more you paid into communal needs, like schools and public infrastructure. In Canada, it was a Conservative Prime Minister, Robert Borden, who introduced corporate and income tax — first as a temporary measure during WWI, but then was carried on so the federal government could expand its services.

It’s only been in the last forty years or so that powerful people have started using their leverage to weasel their way out of paying their share, in a lot of cases cutting down their contributions by one half or more. Where distribution of wealth was once considered noble and fair by many, individualism and greed have started winning the day.

It’s not enough rich people and corporations aren’t paying their own taxes, they’re taking our tax money, too. According to a study done by John Lester, the federal government and Canada’s four largest provinces have collectively handed over $29 billion a year on business subsidies — by way of the tax system, spending programs or government businesses enterprises. That doesn’t even include tax evasion and offshore tax havens.

The oil and gas industry is in a league of its own when it comes to being propped up by government spending. In late 2018, a $1.6 billion federal aid package for Canada’s oil and gas industry was announced to help companies “find new markets, invest in clean technology and train staff”. Then came $275 million for LNG Canada, the export terminal for the controversial Coastal GasLink Pipeline.

This, after an already $1.6 billion was handed out in royalty credits and infrastructure support by the Alberta government.

Then of course there’s Ottawa’s purchase of the aging Trans Mountain pipeline for $4.5 billion, plus at least $12.6 billion more for the expansion. All told, Canadian taxpayers are set to pay at least $20 billion in additional support for a climate-killing, dead end industry that was already receiving more than $3.3 billion a year in government subsidies. How many hospitals and schools could that money buy instead?

That number doesn’t include an estimated $260 billion of environmental liabilities the oil and gas sector currently holds. When companies can’t or won’t pay for remediation or clean ups, it’s you and me who will foot the bill.

Tax breaks, handouts and payment deferrals are all on the table for our nation’s wealthiest corporations. Billions of dollars in public money is handed over to fossil fuel companies, many foreign-owned, on operations that bring in billions of dollars in profit. These companies have money in the bank, but instead of giving their fair share to protect and support everyday Canadians, they hand wads of cash over to shareholders — then hoard the rest.

It’s the government’s job to fix this

There are probably a lot of solutions to putting an end to corporate welfare — I’m not an economist, but raising income tax for the wealthy and cutting off corporate subsidies seems like a simple way to start. But whatever the solution to this urgent problem, it needs to be tackled by government. Politicians are the ones being lobbied, and letting wealthy people and Big Oil corporations shirk their moral responsibility.

If politicians keep bending to the influence and pressure of billionaires, our communities will continue to break down and vulnerable people will fall — with no safety net to catch them. And since oil and gas operations are being propped up by those of us who do pay our taxes, we can expect climate change to keep running rampant, too.

Without everyday people pushing government into action, billionaire socialism will not go away. It’s just too sweet a deal for the people reaping the benefits. Fossil fuel companies will keep getting our money, and people like Jim Pattison will continue being admired for minor ducat philanthropy rather than being held accountable for the money and mega yachts they’re hoarding.

If you want Canada to spend less of our money on the conquests of rich oil executives and climate-killing industries, sign our petition now to end fossil fuel subsidies.

One response to “Rich corporations are hoarding money, and taking ours too”