Survey says: This is the gold standard

Dogwood launched our Ban Big Money campaign in April 2016. Since then, we have been demanding changes in campaign finance laws and holding B.C.’s governing parties to account.

We were instrumental in helping campaign finance become a key election issue and we are pleased to have played a significant part in the effort to get voters who care about transparency and accountability to the polls.

Since then, not only have British Columbians elected a party that has publicly stated Ban Big Money is a priority for their government, all three parties have now publicly expressed their support, meaning Ban Big Money laws are certainly on the horizon. We are excited to be able to work with parties across the aisle to create the gold standard of Ban Big Money legislation.

We are pleased to present our support for campaign finance reform that prioritizes banning donations from corporations, unions and out-of-province donors, on behalf of 20,565 British Columbians across the province to government and opposition MLAs. We’ve asked them to consider this petition and the people who signed it as they work towards transparency and accountability in government decision-making.

The Ban Big Money campaign has primarily focused on eliminating corporate, union and out-of-province donations, but we know the legislation will need to be more inclusive and detailed. However, because British Columbia has never had campaign finance laws before, we’ll need to start from scratch to determine what the gold standard of campaign finance laws actually is.

So, in collaboration with the University of Victoria’s Environmental Law School, we ran a comparative analysis of policies across the country to identify best practices. We then took the best practices found in Canada and asked our supporters what they thought an appropriate Ban Big Money law should look like.

2,151 Dogwood supporters completed our survey in which we asked what the gold standard of Ban Big Money legislation should look like. Here are highlights from the results:

The polling we conducted through Insights West in April 2016 indicated British Columbians were comfortable with individual contributions of less than $1,000 — on average, $709.

At the federal level, a political party and local candidate can each receive $1,550 (increasing by $25 each year) from an individual contributor. The lowest limit across the country is in Quebec where the limit is $100, while the largest limit is in Nova Scotia at $5,000 per year. 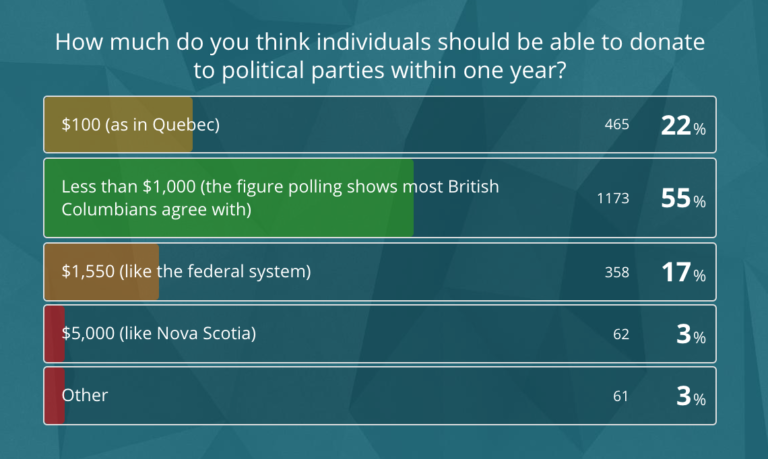 The limit for how much can be given anonymously varies largely across the country, ranging from no anonymous donations allowed (in Quebec, Nova Scotia, PEI, New Brunswick) to anonymous donations accepted up to $100 (in Nunavut, Northwest Territories and Newfoundland).  60 per cent agree donors should not be anonymous. 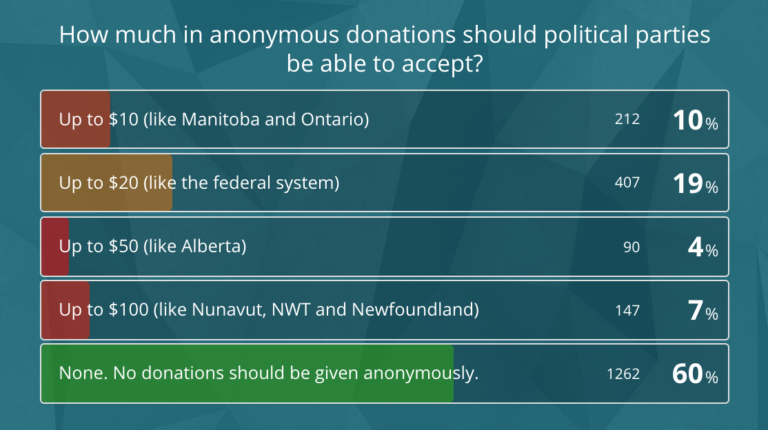 Across the country, Ontario is the only province that offers real time reporting and disclosure of donations. 65 per cent of survey respondents agree donations should be disclosed in real time. 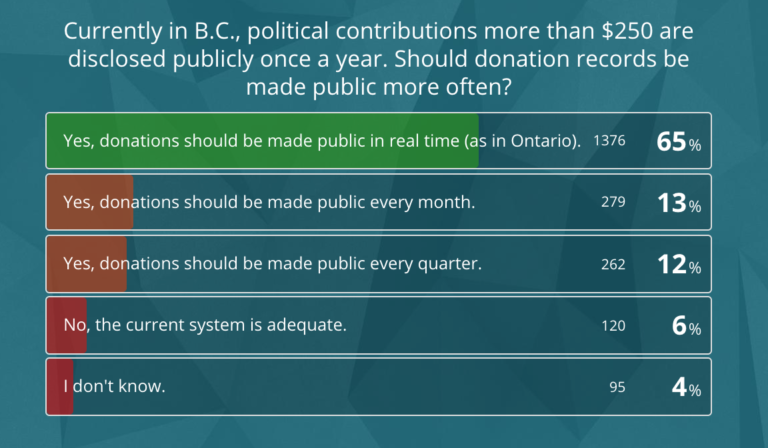 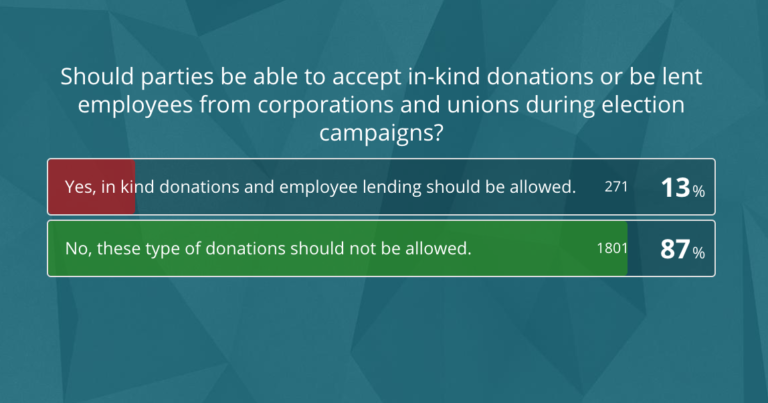 Per voter, B.C. has the highest campaign spending limits in the country. 84 per cent of respondents agreed the amount parties and candidates spend during a campaign should be lowered. There are several ways to determine this, yet best practice indicates the limit should be determined by the number of voters in each riding. 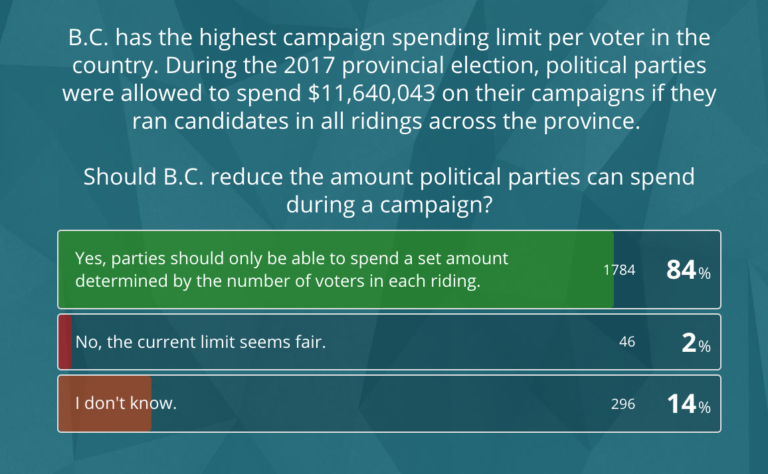 There are three ways political parties could supplement donations and support their campaigns through taxes. Most survey respondents agreed with some type of public support to offset campaign expenses in lieu of Big Money donations.

Political parties could be reimbursed for some election expenses from tax dollars, as is allowed in Saskatchewan, Manitoba, Ontario, New Brunswick, Nova Scotia, PEI, Newfoundland and at the federal level. 23 per cent of respondents agreed this was the best option.

Political parties could be awarded tax dollars based on the amount of votes they receive, as is the system in Ontario, Quebec, New Brunswick, Nova Scotia and PEI. 15 per cent of respondents supported this option.

As is currently allowed in B.C., tax credits can be issued to reimburse a percentage of a contribution from a donor. 15 per cent of respondents supported this option.

38 per cent of respondents felt political parties should not be allowed to access tax dollars for campaign purposes. 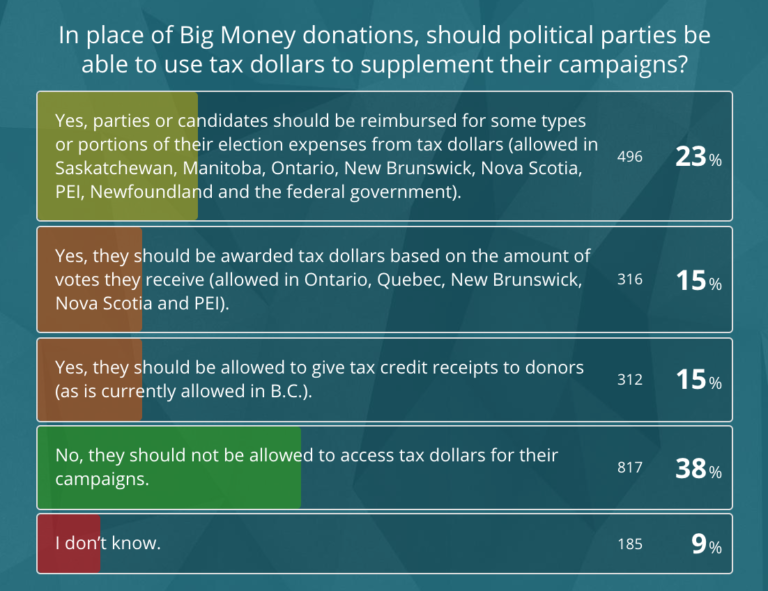 As suggested by Attorney General David Eby, there is a possibility that Ban Big Money laws could be imposed retroactively to the provincial election on May 9, 2017. 60 per cent of our survey respondents agreed with this suggestion.

John McCain, the multi-term U.S Senator from Arizona that has had a long-time interest in campaign finance reform, has said as soon as new tough political donation rules are established, big corporations, lobbyists, criminals and party hacks get to work finding and exploiting loopholes. He suggests campaign finance laws be updated every decade to close these loopholes.

We asked survey respondents if they agreed that B.C.’s Ban Big Money legislation includes a provision requiring the legislation to be reviewed and revitalized every decade — 90 per cent agreed. 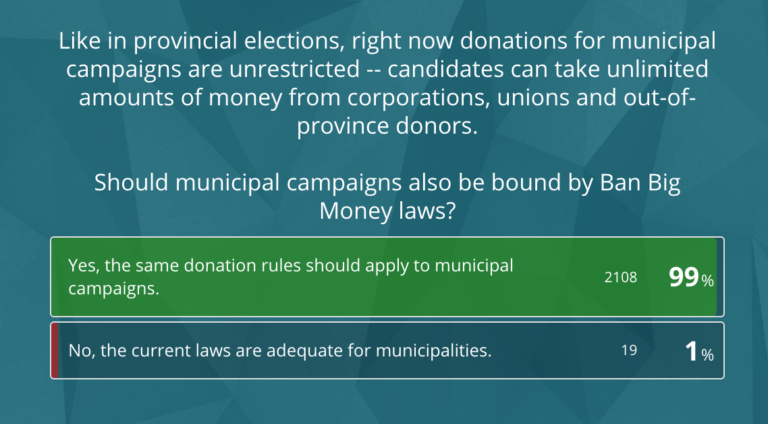 Based on the results of our cross-Canada analysis and our supporter survey, Dogwood has developed a bullet point list of what we think Ban Big Money legislation should look like. After years of being silenced by Big Money, British Columbians won’t settle for anything less than the gold standard. This is the standard we will use to measure any campaign finance laws that are introduced.

Here is a short summary of our recommendations:

12 Responses to “Survey says: This is the gold standard”