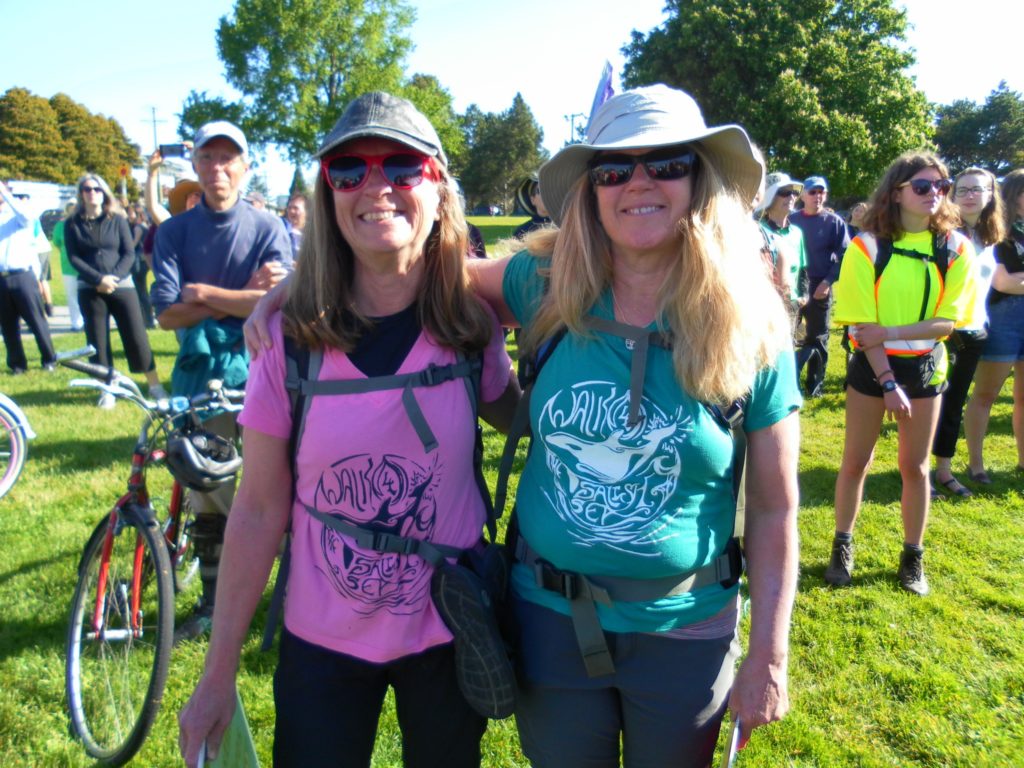 My sister and I walked from Victoria to Burnaby

Why would two Dogwood organizers in their 60’s decide to walk 80 kilometres?

Last month, my sister and I embarked on four days of walking from Mile 0 in Victoria to the Kinder Morgan Terminal in Burnaby, and three nights of sleeping in a tent or on a church floor. Why?

This “Walk 4 the Salish Sea” was organized by a small group of grassroots activists, led by Bobby Arbess, a man with a long history of activism and an infectious personality. Bobby had the idea – a four-day march to raise awareness about the Kinder Morgan expansion project, and raise funds for the Pull Together campaign to support First Nations legal challenges against the federal government’s approval. And he had the energy – untold hours of organizing and making connections resulting in a huge collaboration between First Nations and nonprofit groups.

To me it seemed a no-brainer. I love to walk, I am passionate about Indigenous consent, and fighting the pipeline has become a major part of my post-retirement ‘work’. I began volunteering with Dogwood three years ago when I could no longer stand back and witness the bullying of the federal government in pushing the rights of corporations over the rights of ordinary people. I started by collecting a few signatures, and buoyed by support from other Dogwood volunteers as well as from the Victoria community, my feelings of anger began to turn into feelings of power and hope. I am now a regional organizer for teams in the West Shore and in Nanaimo. My sister Carolyn is a team leader in Nanaimo. We decided to do this walk together.

I am proud of the work Dogwood does. When I hear the narrative in provincial politics taking on issues like banning big money, stopping pipeline expansion, and blocking US coal shipment through B.C. ports; I know that this is the result of behind the scenes strategizing, legal consultation, and hobnobbing with corporate and government powerhouses. I know it is also because of the 265,000 Dogwood supporters in British Columbia – we are a powerhouse in our own right!

So why march? Although I am an ardent supporter of direct democracy, there is a time when it is important to move out from behind the scenes and show strength in a very public way. I see direct democracy and public protest as two essential paths in this fight to protect our earth and our rights.

The Walk 4 the Salish Sea was organized by Bobby Arbess, but the walk leader was Chief Gordon August, hereditary chief of the Sechelt Nation. Chief Gordon not only led the marching and the drumming; he led with his wisdom, both spiritual and practical. This was seen in the prayer songs at significant moments along the route, and when uninvited plainclothes RCMP joined the walkers. He led with dignity and grace, as when he invited a rogue bagpiper to join the drummers at the front of the march. He taught us that the world is round; that it is not about Indigenous Peoples and settlers, it is about us all.

This walk was about showing our strength in a very public way, but it was also about community. A community of walkers from many nations, from many islands and communities of the Salish Sea, and from far away. It was about the support and generosity of the Tsawout Nation in sharing their space and their salmon for the potluck dinner on the first day. It was about the incredible hospitality of the Ladner United Church congregation, who welcomed us into their spiritual home, and provided not only a place to sleep, but dinner and breakfast, and foot care, and sunburn relief, and showers. It was about the people along the way from Victoria to Burnaby, who tooted their car horns in support, and who cheered or looked on us with interest and not anger when we took over the street.

And when we finally arrived at the gates of Kinder Morgan, it was about power! It was about standing together in a show of force that said, this pipeline and tanker expansion will not happen. Whether through the courts, or through a new BC government with the Green Party and NDP working together, or through public protest and civil disobedience, there will be no Kinder Morgan pipeline expansion!

Kathryn Cass is a Dogwood regional volunteer organizer. You can chip in here to support her fundraising through Pull Together for the Squamish, Tsleil Waututh and Coldwater’s legal challenges against Kinder Morgan.