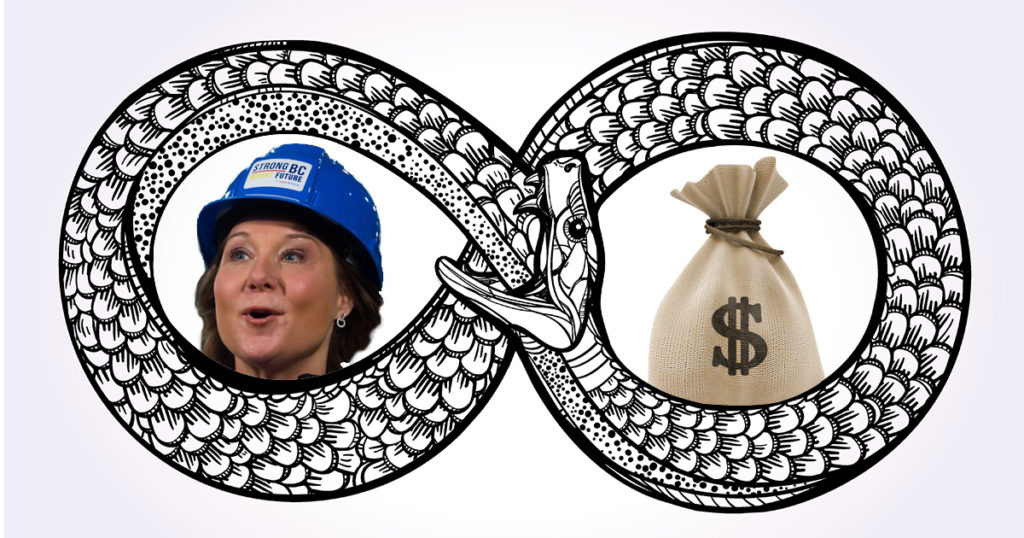 The final piece of the puzzle

Mother’s Day is coming up. When I was a little kid, if I wanted to get my mom a present I had to pay for it out of my allowance. Who gave me my allowance? My mother.

It’s become clear over the last few days that the same thing is happening in B.C. politics. Christy Clark’s party is funded by a tight-knit group of corporate friends. Where do these captains of industry get much of their pocket money? Why, from the BC Liberal government.

This limitless fountain of regurgitated public money gives the party a massive advantage in elections.

In practically any other part of the world, the people responsible for this monstrous scheme would be arrested and put in jail. But until B.C. bans Big Money in politics, the whole thing appears perfectly legal.

Tax dollars in, party dollars out

On Friday CTV’s Jon Woodward released a fascinating piece of data journalism: it turns out the BC Liberals have collected at least $4.78 million from people they appointed to provincial boards.

“More than half of the board members in dozens of government institutions, including Fraser Health, the University of British Columbia, the B.C. Lottery Corporation, and the Vancouver Police Board, are Liberal donors,” Woodward reported.

In other words, ministers appoint their friends to taxpayer-funded positions overseeing these public institutions. Board members cash the extra paycheque – then turn around and donate to the party.

Or look at “Advantage BC”: a secret club of 82 companies that collect special tax breaks from the government of British Columbia. As the New York Times reported last week, this pork-scented program has doled out $140 million in public dollars since 2008.

While the government refused to identify those 82 companies to the Times, Integrity BC was able to cobble together a list. Sure enough, many of them are major party donors – including banks, timber companies and real estate firms.

In his e-book “May I take your order, please?” Integrity BC executive director Dermod Travis looks at 177 donors who have given at least $100,000 to the BC Liberal Party. Travis found these corporate titans have received extraordinary government largesse:

Are those dollars going back to the BC Liberals? All we can say for sure is that cheques go out to corporations, and cheques come back to the party. But as Dogwood’s Lisa Sammartino discovered in her analysis of public road contracts, those two events often happen very close together.

Sammartino also found that donor companies in the paving sector receive more contracts than non-donor companies, with the average dollar value significantly higher. This raises the possibility that we’re overpaying for contracts to cover the built-in cost of political donations.

And it’s not just roads. Over the weekend the Tyee’s Chris Pollon published an extensive analysis of contracts handed out so far on the $9-billion Site C dam. Sure enough, together 20 different winning companies have donated more than $1.2 million to the BC Liberal Party.

By the way, it’s illegal in the United States for a donor to bid on government contracts from the politicians they are financing. It should be illegal here, too.

I used to think B.C. politics worked like this: Say a company needs a particular outcome from government. Perhaps a project approval, like Kinder Morgan, or a get-out-of-jail-free card, like the owners of the Mount Polley Dam. Or the defence of an unpopular policy, like the U.S. trophy hunting lobby.

According to corporate logic, they should spend the minimum necessary to maintain access to government decision-makers and secure a policy win. This amount can be fairly modest, since their opponents (usually grassroots citizens) can’t exactly outbid them.

But if the government itself is responsible for a big chunk of a company’s revenue – whether in contracts, transfers, cheap land, subsidies or tax deductions – how can the company say no when the party fundraisers come knocking? Easy come, easy go.

The BC Liberals have raised $41.4 million since the last election, most of it from a relatively small network of big corporate donors. How much of that is our money?

Christy Clark has warned that if corporations are barred from funding elections, the burden will fall on the public. “I believe most taxpayers would say if they want to give to a political party, they don’t want to be forced to do it,” said Clark.

Well, it’s a bit late for that.

If you can help us get voters out on election day, please sign up for a volunteer shift right now: http://VoteBC.ca