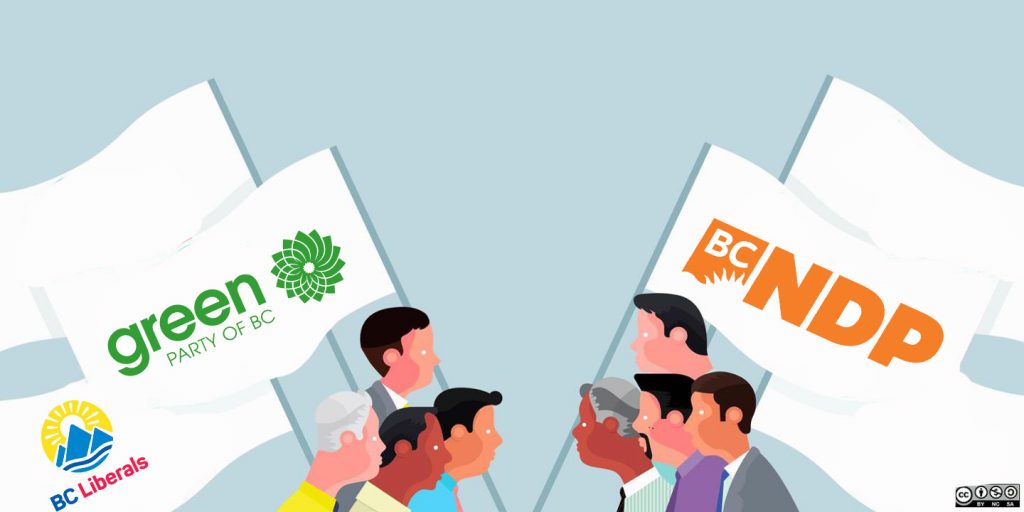 Fight for your right, to party

Political parties can slam the door shut in your face if they want to. But at what cost?

Last fall, I did something totally unremarkable. I joined the BC NDP. Five years before that, I signed up to be a member of the BC Liberals. I’ve added my name to petitions belonging to the BC Greens and I donated to Elizabeth May’s campaign when she first ran in 2011.

What does my history of “party jumping” say about me? That I’m one of thousands of British Columbians who do normal things like join whichever political party I want to, based on my values at the time. Or because I think my voice or vote within that party will give me more say over decisions that will affect my life, my family or my community.

I’ve changed my views over time. Political parties and politicians have, too.

I don’t care about being on this team or that. Personally, I think it’s unrealistic to operate as if “one side” has all the answers and the other side is just wrong. What I care about is supporting policies that will fix major problems we have in this province. And I’ll do that by joining whichever party I need to.

I’m not exactly alone in this. Long before becoming Premier John Horgan’s chief of staff, Geoff Meggs was a member of the Communist Party. Thomas Mulcair famously started his career as a Liberal politician before becoming leader of the NDP. There have been many dramatic moments in the Legislature or Parliament when a politician crosses the floor to join another party. Just Google ‘List of Canadian politicians who’ve crossed the floor’ to read the extensive list of names.


But changing one’s mind or party doesn’t have to be that grand. A lot of folks get pissed off with one faction and start donating to another, out of spite or revenge or any other standard emotion that comes with high stakes decision making in politics. It’s not weird. But if parties start punishing people for these shifts in views or values, or throwing hissy fits in some cases, democracy is in even more trouble than I thought.

I didn’t read the NDP’s constitution before joining (it wasn’t available online, so I didn’t know it existed). Last fall when I signed up using their website, I didn’t notice any mention of it. Here’s how I became a member in one minute or less: I filled out a digital form with my name, address and other basic information, I gave the party $10, I ticked a box saying I wasn’t a member of another political party, and bing-pot! I was a member.

At the time, no one from the BC NDP called me to “verify” who I was or that I would abide by their constitution. The only calls I’ve gotten since have been about donating more money.

But over the last couple weeks I’ve been hearing that folks who recently became members of the BC NDP have gotten calls or e-mails asking them to explain why they signed up, if they paid with their own money, if they were a member of or donated to another party (including federal), and will they agree to the party’s constitution.

One e-mail from the BC NDP to a new member went so far as to say they *knew* the person was a Green party donor and asked them to send in written proof they’d left the Greens before becoming a member of the NDP. I don’t remember having to submit anything like that last fall when I gave them my money to sign up.

So, is it pragmatism the BC NDP doesn’t accept? Or is there some other reason they’re giving new members the third degree?

Political parties have every right to verify their members, and it makes sense they’d be more diligent during a leadership race. But the timing and people targeted in the aggressive campaign the NDP is running is not a coincidence.

Dogwood was one of a few groups that encouraged our supporters to sign up as members of the BC NDP to participate in the vote that will decide our next premier. It’s rumoured that climate organizers helped bring in 10,000 new members, while the establishment candidate, David Eby, signed up as few as 1,000.

This tidal wave of new blood into their base is being viewed by party insiders as a threat to the status quo. The plan was for David Eby to run unopposed straight to a coronation. Now, Eby and BC NDP die-hards are desperately looking for a way to discredit and disqualify his competitor — a strong climate candidate — along with a bunch of the new party members they suspect will support her.

Last fall, there didn’t seem to be any verification happening. Now, there’s a hired third party calling centre running a phone campaign to “welcome” new members into the fold. But this intro to the NDP — an out of the blue phone call with someone essentially asking “Who the eff are you?!” — is an icy intro to a party that refers to its members as their heart and soul.

Their response is also indicative of a party set in its ways — unwilling to challenge themselves to respond to the evolving needs of British Columbians. If every person joining a party has to already agree 100 per cent with that party, where’s the growth?

Beyond the timing, the scale and intensity of the BC NDP’s reaction to this influx of new member sign ups is also pretty telling. Why would a political party be so afraid of new, climate-focused members? Could it be because they know they can’t defend their party’s environmental track record since taking power five years ago? And that their established candidate hasn’t got a leg to stand on if his climate plan includes a massive increase in fracking across the Northeast and four new gas pipelines across unceded Indigenous territory?

Or… is it because the party brass is in the grip of oil and gas lobbyists?

It’s pretty tough to defend climate disaster decision-making when the majority of your base is calling for an end to fossil fuel extraction.

Under the NDP, the government has increased tax breaks for fracking companies, supported the construction of Coastal GasLink and rolled over on Trans Mountain, called in the RCMP on Indigenous land defenders and old growth activists, has done little to stop reckless logging practices, continues to take Indigenous nations to court over land rights and passed the buck on Site C.

No accountability or change at the top, things will carry on as they have been. For many of us, myself included, that’s unacceptable. Joining the NDP with the hopes of changing things from the inside is one of the few ways I feel like I can do something about it.

Access to our political system should not stop at the door of party bureaucracy. British Columbians should be allowed to choose our next premier in the case of a leader stepping down mid-term with no general election. Our tax dollars pay their salary. And it shouldn’t matter *why* thousands of people decide to become a member of the governing party. It’s called democracy.

4 Responses to “Fight for your right, to party”