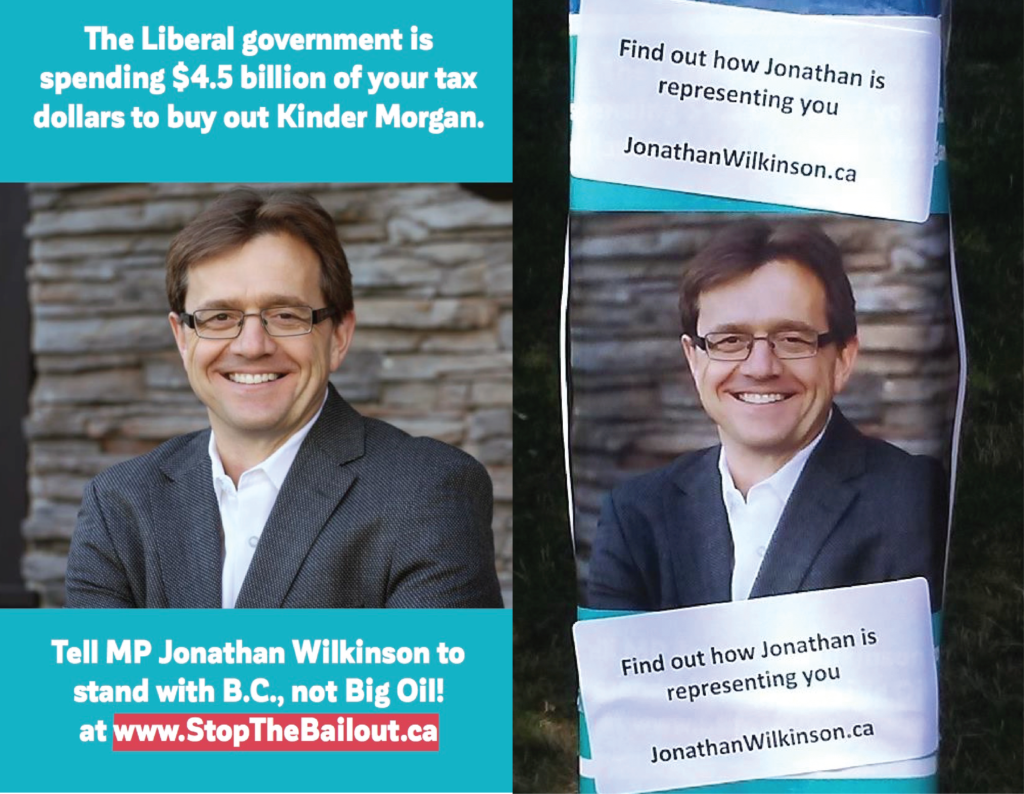 Who defaced our flyers in North Van?

It’s what North Shore voters believed we were getting when Liberal candidates swept Stephen Harper’s Conservative MPs off the map in 2015.

I suppose some things have changed. Like our parliamentarians’ positions, rhetoric and attitude toward the people that elected them.

North Vancouver MP Jonathan Wilkinson trumpeted the dawn of a low-carbon future to anyone who would listen in 2015.

“It’s important to determine which sectors will be the new drivers for growth as fossil fuels recede in value,” he told the local Dogwood team at a meeting in November 2015. “Our job includes how to create strategies and encourage new sectors for Canada’s economic future.”

Little did we know that “new sector” would turn out to be the oil sands, and the “encouragement” would be billions in corporate welfare.

We heard lots about “cleantech” during Wilkinson’s campaign, bolstered by his experience as an executive at companies working on carbon capture, biomass energy and fuel cells.

“One of the problems with Canada’s previous government is it saw cleantech largely as an enabler for the oil industry,” Wilkinson said at the time.

“If we want to be a country that can sustain the standard of living we’re accustomed to, that growth isn’t going to come from more oil and more gas and more coal. One of the areas it can come from is cleantech.”

And yet, in just two short years, Wilkinson became just another mouthpiece for dirty crude. “Mr. Speaker, for 10 years, under the previous administration, not one kilometre of pipeline was built to tidewater,” he said in the House of Commons, aiming a now-familiar taunt at the Conservative benches.

Which brings us to the present.

Between the Trudeau administration’s back-tracking on electoral reform, the approval of Kinder Morgan without a “re-do” of the brutally flawed NEB process, and now the news that we’re paying $4.5 billion for a leaky, 65 year old pipeline, Wilkinson has been working overtime to justify broken promises coming out of Ottawa.

Not an easy job, but our MP has taken it on whole-heartedly. As parliamentary secretary to the Environment and Climate Change minister, Wilkinson now traffics in all manner of doublespeak and bafflegab.

Today the North Van MP asserts that diluted bitumen poses no particular challenge to clean up — and oil spills are unlikely anyhow. His government’s pipeline approval was based on “robust science and evidence,” he says, over the protestations of actual scientists. Indeed, expanding the oil sands will reduce Canada’s emissions.

Further, it turns out the phrase “only communities grant permission” does not apply to the 22 municipalities or 85 First Nations who do not support the pipeline and oil tanker expansion. And although independent analysts say Ottawa massively overpaid for Trans Mountain, don’t worry, we’ll flip it to another buyer for even more.

All this bullshit seems to have made Wilkinson allergic to plain, simple facts. 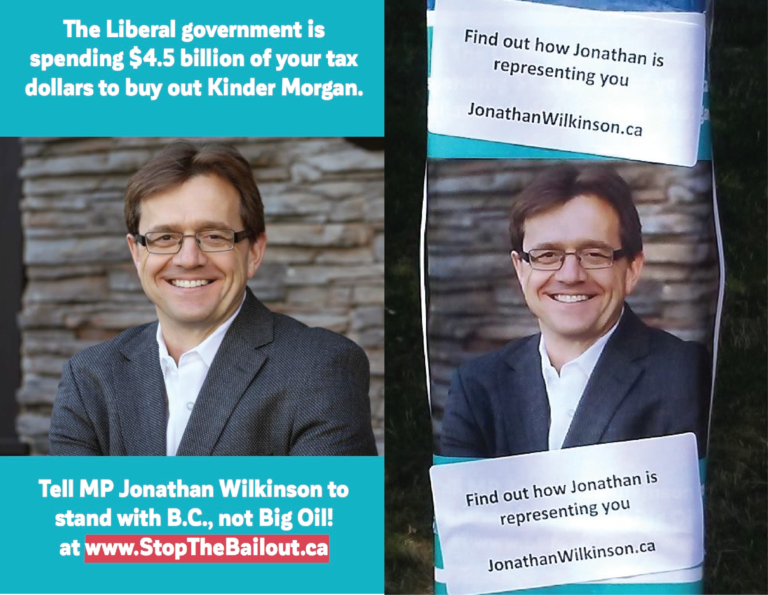 North Vancouver posters – before and after

Is MP Wilkinson (a Rhodes Scholar, he likes to remind us) having trouble documenting the “science and evidence?” Or is it becoming harder to choke out “the environment and the economy go hand in hand” when you’ve just written a cheque for $4.5 billion to a Texas oil company?

Hard to know. One thing’s for sure: we’re gonna need some more flyers in North Van.

16 Responses to “Who defaced our flyers in North Van?”