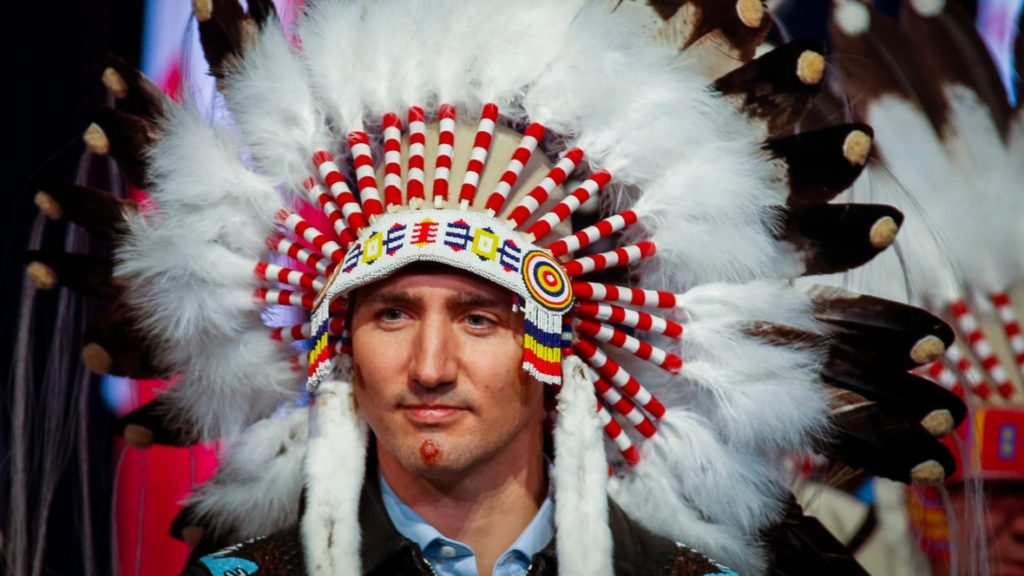 No consent from communities? Too bad, says Trudeau.

“Sunny ways, my friends. Sunny ways!” For most people, that line in Justin Trudeau’s victory speech two years ago heralded a return to “positive politics” after 10 years of Stephen Harper’s icy glare.

It’s also a reference to tricking someone into taking their clothes off.

As the Liberal Party website reminds us, Trudeau’s “sunny ways” is a tribute to Prime Minister Wilfrid Laurier (the guy on the five dollar bill). Laurier believed in disarming his opponents with charm and flattery. In 1895 he invoked one of Aesop’s fables to illustrate his political philosophy.

It goes like this: One day the Wind and the Sun were arguing about who was more powerful, when a hapless traveller passed by on the road below. The Sun said “Whichever of us can cause that traveller to take off his cloak shall be regarded as the stronger. You begin.”

The Wind started huffing and puffing. But the harder he blew, the tighter the poor human clung to his cloak. Then the Sun came out and “shone in all his glory upon the traveller, who soon found it too hot to walk with his cloak on.”

Perhaps it’s not surprising that Justin Trudeau would identify with a celestial sky-king, toying with us mortals on the earth below.

During his election campaign Trudeau promised ad nauseum that “governments grant permits, but only communities can give permission.” He was talking, of course, about pipelines. But soon after winning power, his position shifted to “Father knows best”.

If completed, the project would drain 890,000 barrels of crude oil every day to refineries in California and Washington. Like a maritime Keystone XL, it represents a last-ditch liquidation attempt by oil sands operators looking to get as much raw bitumen out of the ground as possible before demand drops.

By signing on to this desperate scheme, Trudeau put the lie to his own election promises and ignored the explicit lack of consent from First Nations communities disproportionately affected by pipeline construction, oil spills and climate risk.

This week the women of the Secwepemcul’ecw Assembly vowed to shut down any “Man Camps” Kinder Morgan tries to build in their vast North Thompson territory. As the Secwepemc declaration notes, a growing body of research is finding links between remote work camps and violence against women.

Farther south is the Nlaka’pamux village of Coldwater, whose leaders were barred from hiring lawyers when the first pipeline came through in 1952. The government handed over a lump-sum payment of $1,200 and told them to sign. The people have lived with an oil pipeline hissing over their water aquifer ever since. They don’t want to triple that risk.

Nor do the Tsleil-Waututh in Burrard Inlet, who have coaxed healthy, edible clams and other sea life to grow again in a waterway hurt for decades by industrial pollution. Or their neighbours the Squamish, who are reviving their language – a language born thousands of years ago from the very landscapes and ecosystems that would be obliterated by an oil tanker spill.

Days before Trudeau gave Kinder Morgan the green light, Tsleil-Waututh leaders flew to Ottawa to deliver, in person, their “informed withholding of consent”. What they didn’t know is the federal government was already setting up a website to announce the Kinder Morgan approval, before the leaders’ plane even landed.

What kind of self-professed feminist decides that “no” really means “yes”? In Justin Trudeau’s case, a Prime Minister who also fought to preserve discrimination against women in the Indian Act, and still refuses to provide equal health care or education funding for Indigenous children.

Some cloaks – like human rights – are too important for people to discard no matter what sunny charms are beaming down on them. Lucky for Trudeau, if his tousled hair and boyish stutter fail to change people’s minds, he has all the power of the state to enforce his will.

With two years until the next election, Trudeau will have to decide how important this Texas pipeline is to him. Important enough to expropriate reserve lands to shove a pipeline through? Important enough to do as his oil minister suggested, and send in the army to quell resistance?

20 Responses to “The creepy double meaning of ‘Sunny Ways’”