Posted in Beyond Coal, Commentary

Two post-election updates from members of our Beyond Coal team.

Another bottle of champagne, please

The weekend after the federal election the Ross family in Tsawwassen uncorked a bottle of champagne.

That’s because on Oct. 19 – for the first time since the election of 1968 when the coal port was first built at Roberts Bank – Delta elected an MP from a party that has vowed to revamp the environmental assessment process for port expansion and fossil fuel export projects.

In places like Delta, Surrey, White Rock and New Westminster, it wasn’t the greasy fossil fuel projects that were top of mind, it was the powdery ones. Namely, thermal coal shipped from the U.S. to be exported to Asia via B.C. ports.

In those communities, Dogwood supporters, volunteers and partner groups looked to their local candidates for answers about what they would do to fix the broken port decision-making processes that have allowed a project like the Fraser Surrey Docks coal transfer proposal to move forward despite fatally flawed assessments and widespread public opposition.

The candidate who won that historic race in Delta, Carla Qualtrough, said this:

“Before expanding thermal coal shipments, there must be a credible environmental assessment, including an assessment of the health impact on the affected communities. There is also a need to clarify roles and responsibilities through stronger relationships and open dialogue. This includes examining the structure of Port Metro Vancouver, for the benefit of the port communities. The current Port governance is not accountable to the community, with only one representative on the Board appointed by local governments, with the majority of Board appointed federally. PMV governance would benefit from being reviewed, and restructured if necessary, to ensure that local communities have a strong voice in Port management.”

Her colleague Randeep Sarai, who swept to victory in Surrey Centre, had this to say in an e-mail to a Dogwood supporter during the campaign:

Liberal candidates across the province echoed this promise to reform Canada’s environmental assessment regime, including key decision-making bodies like Port Metro Vancouver and the National Energy Board.

What’s more, the Liberal government is serious about climate action. Not only has the party committed to considering upstream and downstream impacts as part of environmental assessments, Prime Minister-designate Justin Trudeau moved quickly to signal cooperation with provinces and other parties on emissions reductions targets and carbon pricing.

I have no doubt that under new leadership, Canada will join the rest of the world in its increasingly solid efforts to move away from thermal coal as a source of energy. This will only hasten the already bleak economic downturn for thermal coal producers looking to export their risky product through B.C.’s ports.

Just last week, U.S. exporter Cloud Peak Energy negotiated a deal to suspend its coal shipments through Delta’s Westshore Terminals for three years. The company was losing more than $20 per tonne on the coal it was shipping to Asia, and it was finally cheaper to pay a multi-million dollar penalty than to keep taking those losses.

So, as the director of Dogwood’s Beyond Coal campaign, I am more hopeful than ever that with a new Liberal government that counts MPs like Carla Qualtrough and Randeep Sarai as part of their caucus, empowered local citizens in ridings across B.C., and global trends towards climate action and away from thermal coal dependence, we can get beyond project-by-project fights. We’re entering a new era of opportunity to find comprehensive, long-term solutions that will permanently transition B.C. away from fossil fuel exports and bring decision-making power back to local communities.

I think this may call for another bottle of champagne.

My, how things have changed

I remember when I started working on Dogwood’s Beyond Coal campaign. The Fraser Surrey Docks coal transshipment facility was supposed to begin operating in September of 2013. Well 2015 is nearly over and they’re further from construction than ever before. With plans to begin operating in 2018, the future seems pretty bleak for coal exports on the Fraser River. Right now Powder River Basin is losing $20 per tonne causing one supplier to suspend coal shipments through Westshore terminals until 2019, so where will Fraser Surrey Docks find new suppliers for thermal coal shipments in an “extremely depressed” global market?

With newly elected MPs who say U.S. thermal coal can’t be shipped without a revitalized environmental assessment process and an actual Health Impact Assessment, now seems like the right time to transition to renewables and away from coal.

Our teams worked hard to get voters to the polls. We offered information to make informed decisions. When a request for endorsements was made, we simply directed people to the candidate responses to our survey.

On election night I watched with disbelief as my home riding changed from blue to red for the first time since 1968. Of course our team alone can’t take credit. Unlike previous elections, almost everyone I knew was talking about it: on social media, in person – everywhere. It was the work of friends talking to friends, neighbours talking to neighbours, people writing and posting and talking about the reasons why this election was so critical that changed things this time around.

I sat beside my mom on election night. She’s a team leader in Delta who orchestrated phone banks, organized canvass events and helped organize a candidate debate with community partner groups. We watched with guarded excitement, emitting squeals of delight and nervousness as we saw the results roll in. That is easily one of my favourite memories of the election effort: watching my mom as she saw the results of their team’s hard work. For every vote, there was a conversation between friends to help each other get the information they needed to make it to the polls.

I had friends offering to drive others to the polls in their Facebook statues in the days leading up to Oct. 19. I saw more voting related seflies than I have in the last three elections combined –  and they weren’t even giving out “I voted” stickers! I even had long lists of folks requesting my handmade, witchy VOTE butto
ns.

At the end of the day there’s one thing I know for sure: young people are engaged in the democratic process more than before. I’m hopeful this trend will continue –  not just when people have something to vote against, but when we have something to vote for. This year, we voted for leaders who will show up for their constituents – at home and in Ottawa. 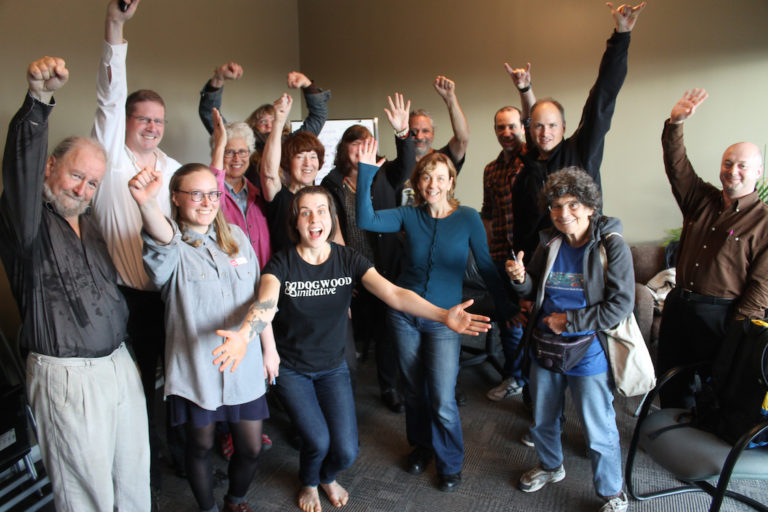 After years of struggle, the door has finally closed on a controversial U.S. thermal coal port on the Fraser River (Photo courtesy of Eoghan Moriarty) Six years ago, Dogwood hired me to start a new campaign. Will Horter, Dogwood’s founding Executive Director, handed me a copy of B.C.’s Dirty Secret: Big Coal & the Export […]

No time to waste

After Nanaimo win, BC NDP can’t take progressive voters for granted With Sheila Malcolmson’s big win in Nanaimo’s by-election yesterday, the BC NDP are no doubt walking a little taller today. After all, the governing party rarely wins by-elections. The BC Liberals poured significant resources into the riding. Malcolmson was behind in the polls. The […]

A geographic rift is emerging between two competing visions for the future. They can’t both win. The fight between B.C. and Alberta over the Trans Mountain oil tanker project may seem unique to Canada’s confederation. It’s not. Across North America, coastal cities bracing for a century of climate chaos are finding themselves at odds with […]