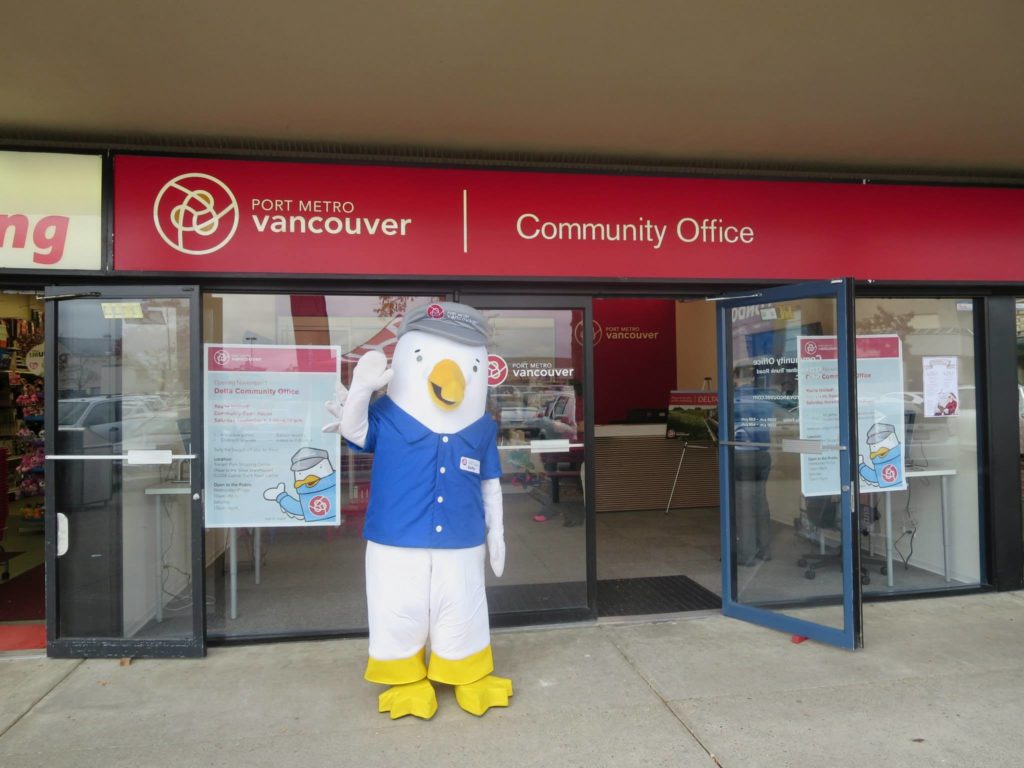 They heard from us anyway – thousands of us

On a late summer Friday in Ladner, even the local fishmonger was clamouring to give the port authority a piece of his mind.

Seven Dogwood Initiative organizers had gathered at the shopping centre where Port Metro Vancouver has its only “community office” to round up last-minute comments from local residents on Fraser Surrey Docks’ proposal to build a new port for U.S. thermal coal just up the Fraser River. Aug. 21 was the last day for the public to have its say, and the team gathered 50 comment postcards in just two hours.

Those were added to 150 others and delivered straight into the hands of the port employees at the community office. They had already prepared a box that looked suspiciously like a recycling bin to receive the cards.

“These are precious words from the people who live here,” warned Brenda Ross, Dogwood’s Delta team leader, as she placed the postcards in the box.

The port’s response? Comments are supposed to go to Fraser Surrey Docks, the project proponent, because the port authority just has too many projects on the go to consider public input on all of them. But in a magnanimous gesture, for the sake of the community, port staff agreed to accept the postcards. This sums up the attitude at the federal agency tasked with regulating and managing port lands in the public interest.

At Dogwood, we don’t just accept that a federal regulator can shut local communities out of the decision-making process when big coal and oil companies want to export their fossil fuels through our province. That’s why we sent those letters to the port and Transport Minister Lisa Raitt even if they didn’t want to listen.

Those hand-written postcards were part of an unprecedented wave of civic engagement from more than 6,600 people since Fraser Surrey Docks first announced it wants to switch up its plans and build a coal loading facility for both barges and oceangoing ships. Here’s a breakdown:

We engaged with supporters and allies more than ever before: on the streets, on the phones, online and across borders. What binds us together, from Prince George to Surrey to Billings, Montana and everywhere in between, is our passion to protect the people and places we hold dear, and our frustration having tried so many times to have our voices heard only to see permits approved and our concerns ignored in the assessment process.

“Our opinions regarding the proposed coal terminal have not changed yet we are forced to write another letter because our government and the port are not listening to the outcry from the public in regards to this project.” – Keith and Connie, Surrey

“Dependency on coal is a bad idea, loading coal in and around Vancouver is a bad idea, and none of it builds a future for my kids- no matter how much you think the monetary profit will be. And, I think you have heard that the people of greater Vancouver do not support this kind of industry and health hazard – and yet nobody is listening. You are the government of the people, put in place with the trust of the people…Listen.” – Leslie, Vancouver

“This is my home, and the home of many others who have similar concerns. Our voices need to be heard before further action is taken.” -Heather, Courtenay

“The Fraser River and Metro Vancouver are part of my home and I want a say in this matter.” – Amy-Jo, Surrey

“We live in a democratic society yet more and more we find that citizens have to protest to be allowed to voice their concerns about issues that affect their lives and their communities.” – Catherine, Belcarra

“I will not stand by silently while risky fossil fuel export projects are cunningly proposed and threatening the health of my oceans and my coastline. Stop and think about what you are doing. This behavior is unacceptable.” – Mira, Salt Spring Island

After reviewing Fraser Surrey Docks’ amendments to those flawed studies, they found that serious concerns about the company’s analysis of the health and fish habitat impacts of surfactants added to coal, air quality impacts and shipping impacts from noise, accident risk and fugitive dust along the Fraser and in the Strait of Georgia have still not been addressed. Not to mention the continued glaring absence of a credible, independent Health Impact Assessment rather than a narrowly scoped risk analysis.

Luckily, all these precious words, along with everyone else’s submissions, have been captured in the public repository at www.RealPortHearings.org thanks to the ongoing collaboration between Dogwood Initiative, Voters Taking Action on Climate Change, Communities and Coal and site designer Eoghan Moriarty. As in the past, neither the port nor the proponent will make the comments it receives a matter of public record, so we’ve done it for them.

Once again, everyday British Columbians have proven that we’ll exercise democracy even if our government regulators won’t. That’s why this is one of my favourite quotes from the thousands of comment letters:

“This is outrageous and totally unacceptable. The election looms, as does our vote.” – Barbara, Salt Spring Island

Barbara understands that not only do we have to push hard at every opportunity until we stop the Fraser Surrey Docks coal port proposal, but we also have to fix the system that has created this problem. We need a new federal government.

In October we have a chance to sow the seeds of longer-term change towards more democracy and less fossil fuel infrastructure. To build a more just, more sustainable future we want for our kids and our communities.

But only if all of us get out and vote. That’s why Dogwood has embarked on our biggest ever non-partisan get-out-the-vote project. We’re committed to getting voters the information they need about candidates at votebc.ca. And we’re committed to getting British Columbians who care about getting B.C. beyond coal and oil and rebuilding democracy to the polls on Oct. 19.

We can’t do it without you. At the very least, pledge to vote. If you want to take it to the next level, join a team like the one in Delta who hand-delivered precious postcards to the port authority to remind them what we expect from a democratic government in British Columbia. Together, we can achieve great things.