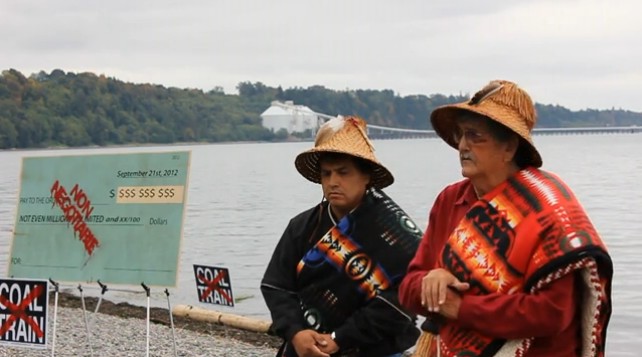 Standing strong in solidarity across the border: celebrating the Salish Sea with the Lummi nation

The Gateway Pacific Terminal at Cherry Point, the Longview coal terminal, and the Fraser Surrey Docks have steep opposition across the border from First Nations and concerned citizens who are united in saying no to increased coal exports through coastal ports – we’re not going away and we stand together to oppose these projects.

On a gloriously sunny May evening I was rushing down to Golden Gardens Bath House in Seattle just as I started worrying I’d be late for the opening of the ‘Celebrating the Salish Sea’ two-day conference hosted by the Lummi nation. That’s when my colleagues from Bellingham unexpectedly picked me up while I was waiting for the city bus. We arrived just in time to hear a beautiful ceremony of thanks for the bounty and beauty of the Pacific Northwest, and a call to action to stand up and protect this place from the plethora of fossil fuel projects bearing down upon it. I was blessed to participate in this conference bringing together tribal leaders from both Canada and the United States, along with affiliated organizations working to challenge fossil fuel expansion projects along the coast.

The Golden Gardens bathhouse was full of sunlight and citizens showing support for the Lummi Nation’s fight to protect their territory from the proposed coal terminal at Cherry Point. We heard from a series of speakers from nations across the Pacific Northwest: from Tulalip to Spokane, from Tsleil-Waututh to Quinault, from the Yakama Nation to the Northern Cheyenne Nation. I was not alone in my persistent state of being near tears. Nations from across the Pacific Northwest gave testimony to their unwavering resistance. We heard tales of coal companies’ deceit and attempts to bribe the nations into allowing coal mines in their traditional territories. We saw tidbits of our own plights in the struggles our allies spoke of.

One unifying message rang out from every speaker: we must stand together to defend our communities and the coastal way of life that unites us all – from Washington to Oregon to British Columbia.

Fawn Sharp from the Quinault Nation said, “Moments like this make the struggle, anguish, and the challenges we face in this work worth while.” I had to agree. When there was only standing room left in the space, it was hard to feel alone. So many people had turned up to show support for the fights led by the tribal leaders who were present.

Lorintha Umtach of Yakama Nation brought up memories of simpler times: schoolyard games of Red Rover in which neighbours stood strong, arm in arm to ensure the opposing team did not pass through the bond. I remember the feeling of intensity in those moments – gripping so tightly with your friends, making sure they didn’t get past you.

Now more than ever I feel that same feeling, but undoubtedly the stakes are higher. We’re not just trying to stop someone from our class in a game of Red Rover – we’re trying to stop transnational fossil fuel companies from further exploiting the place we call our home. During past schoolyard games, I couldn’t have known about the things I would be standing up for several years later. But being called back to that moment by Lorintha made me feel blessed to know I’m locking arms with such powerful allies and there’s not a weak link in our wall of opposition. We’re uniting so when our people are still here in the year 2165, they can rejoice because we did all we could to bring about a future we can all be proud of. We can tell our great, great, great grandchildren that we held the line, side by side, across the border.

JoDe L. Goudy, Chairman of the Yakama Nation, brought big questions to my mind. He reminded us repeatedly throughout our work that we should strive to answer these questions: who are you, where are you from, and where are you going?

I was born in Vancouver, B.C., on Unceded Coast Salish territories to my parents, and was raised on a mixture of principals from Judaism and of some kind of Christianity. I’m a fourth generation Canadian, settled on this land that I now call home. I grew up a few kilometres away from the coal terminals at Roberts Bank and spent my childhood swimming in the ocean, and playing Red Rover at South Park school in Tsawwassen. I have amazing family and friends who support me throughout all of my wild endeavours. I used to live in Scotland and was called back to Canada in May of 2011 when parliament was prorogued and I awoke to a new majority government. I came back so that I could stand up for B.C. alongside my friends and neighbours, and I haven’t stopped since my return.

We have a clear choice: we can allow corporations to run the show, trample over our democracy at every turn and say that we don’t have a say in these projects. Or, we can stand together arm in arm and say no thanks, we’re united and we’re not going anywhere – we know there’s a better way forward.

I know the outcome I’m working toward with the Dogwood Initiative. British Columbians will continue to stand side by side with our neighbours, and with everyone who stands up for their communities and says no to short-sighted development like the Kinder Morgan pipeline, the Gateway Pacific coal port at Cherry Point, and the Fraser Surrey Docks coal port in Surrey.

The people I met at the conference are in the same boat: we’re in this for the long haul. We’ll stand together when the coal ports and pipelines get called over and we’ll brace ourselves to stand strong.  I’m grateful to stand near such great leaders.

I saw similar acts of leadership on May 30 in New Westminster when dozens of Dogwood Initiative supporters gathered at the Tin Soldier by the River Market for Public Awareness Saturday. Residents plastered yellow warning signs all across New Westminster with this message: there’s a coal port coming to your community and we need you to help us stop it! Folks who had never canvassed before bravely grabbed clipboards and approached folks walking the boardwalk. I went home with a sunburn but a feeling of bliss.

When Dogwood Initiative first started the Beyond Coal campaign, I was hitting the streets alone or with my partner Alain to engage voters. On that Saturday, I was with sixty other people who care enough about their home and the threat that Fraser Surrey Docks poses to their way of life to actually walk up to a complete stranger and ask: did you know they want to build a coal port directly across the river from where we’re standing now? Even people who hadn’t heard about the project previously were seriously concerned and wanted to make sure it would never be built. People want to have a say in projects that affect them, and that day many joined over 50,000 other Dogwood Initiative supporters and said no to coal export expansion on the coast.

Grace Ji, a Dogwood Organizer from New Westminster, made her point loud and clear at the day of action. She encouraged everyone who’s concerned about this issue to get active in the community to do something about it. Grace is one of the original organizers of the Beyond Coal campaign, and has been having these one-on-one conversations with voters and neighbours in New West since 2013. I’m glad to stand with leadership from all age groups and demographics in this fight to stop coal export expansion – from New Westminster to Wyoming, from Surrey to Billings – we stand united in our fight. And we won’t back down no matter what kind of changes Fraser Surrey Docks throw our way.

Check out a super fun video from May 30 just below!