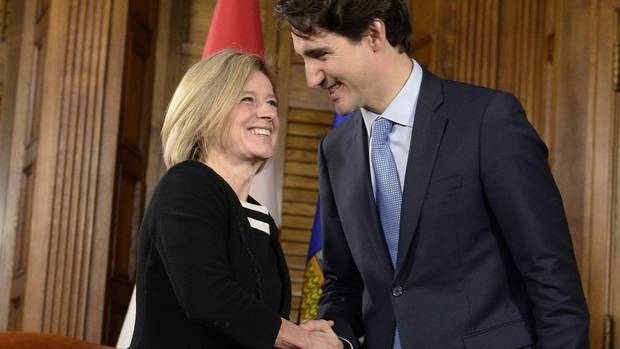 Trudeau’s climate plan: made for the oil patch

Watching Prime Minister Trudeau celebrate President Trump’s executive order reviving the Keystone XL pipeline got me thinking: how is it that our ‘progressive’ Canadian leader is siding with the climate-denying U.S. president on major fossil fuel expansion?

It’s a scary reminder that Trudeau’s recent pipeline and tanker project approvals are simply an extension of the oil patch status quo.

In the 22 years since I was born, pollution from Alberta’s oil sands has more than doubled – driving the vast majority of carbon emission growth in our country. For my entire life, I have watched Canadian governments compromise the stability of our global climate in order to expand the tar sands.

Tapping the brakes, stomping the gas

Prime Minister Stephen Harper committed Canada to cutting emissions 30 per cent below 2005 levels by 2030, a target Trudeau has since kept. But Trudeau’s new climate plan allows emissions from the oil sands to triple over that same period.

If tar sands emissions are to grow three-fold, who’s going to make up the difference?

Trudeau could ask the rest of the economy to take on a greater burden to make up for his oil export ambitions. That would require slashing all other emissions across the country by 41 per cent. Alternately, massive tar sands growth might simply mean Canada misses Harper’s target.

At this point, Trudeau is on track towards the latter.

His government’s Pan-Canadian Plan on Clean Growth and Climate Change promises to phase out coal burning and expand carbon pricing to all provinces – both moves I applaud. But the climate plan still falls short of its goal. Even if you roll in questionable international credits and yet-to-be developed policies like a low-carbon fuel standard or better building standards, Trudeau’s climate plan still misses the target by 44 million tonnes.

That’s about equivalent to the additional tar sands emissions growth allowed under Trudeau’s plan – if you only count the ‘upstream’ pollution in Canada and not the worldwide emissions from burning all that heavy oil.

So no, there isn’t a plan to hit the Harper-era targets. And even that 30 per cent goal falls woefully short of Canada’s fair share toward the goal laid out in the Paris Agreement of keeping warming well below two degrees Celsius, aiming for 1.5.

A new form of denial

President Trump says climate change is a Chinese hoax. Prime Minister Trudeau says it is a real and existential threat to our society. What’s clear is that together, their actions take us in the wrong direction.

Trudeau has developed a more palatable but almost as dangerous form of climate denial: believing that, as long as we acknowledge the scientific reality of our warming world, we can continue to expand fossil fuel production with impunity.

At my most generous, I think Trudeau and his Ottawa Liberal elite have actually tricked themselves with their acronyms and carbon credit schemes into believing heavy oil expansion is consistent with a safe climate for my generation.

The rest of the time, I believe they are trying to deliberately manipulate the Canadian public, exploiting our hunger for win-win solutions by telling us that locking in new tar sands pipeline infrastructure is the pathway to a clean energy future.

And don’t get me wrong – Trudeau’s PR machine is really good at it. They make Orwellian double-speak seem like normal, intellectual political discourse. Canada must build pipelines to fund the clean energy transition! That makes just as much sense as smoking another pack of cigarettes a day to avoid lung cancer.

Yes, the environment and the economy must go hand in hand. But if, in the 21st century, digging deeper into oil exports is the best Trudeau can do, then it only shows how much he lacks the vision and leadership this moment requires.

Last year was the third in a row that broke global temperature records. The U.S. government is now being run by a billionaire climate-denier, the former CEO of Exxon and the Russian president – all of whom are no doubt salivating over the possibility of accessing brand new oil reserves as the Arctic ice sheet melts.

Which in turn means more famine, more conflict and yes, more refugees – yet another global crisis our world leaders are pathetically failing to address.

These are dark times for young people scared about what the future will bring. The impacts of global warming are arriving sooner than expected. But even if the rest of the world gets its act together and solves the climate crisis, Canadians will face the problem of having even more of our country’s economic eggs in the heavy oil basket.

By advocating for new pipelines heading west, east and south, Canada’s self-appointed Minister of Youth is leaving my generation neither the environment nor the economy we need for a stable future.

24 Responses to “Trudeau’s climate plan: made for the oil patch”