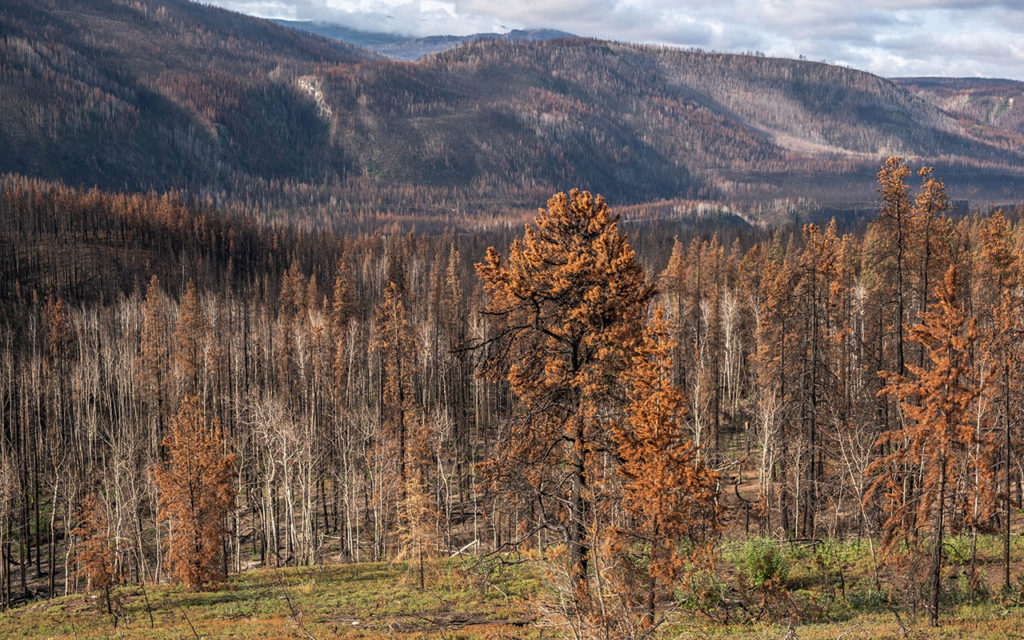 Into the climate crisis: a British Columbia journey

While families wait for salmon, floods wash out roads – and a year-old fire smoulders

B.C. Day is a chance to count our blessings. So far this summer we haven’t faced infernos racing through our valleys, scorching forests and animals, and pushing people from their homes. While Europe bakes in record temperatures and fires rage across the Arctic, our part of the world is perhaps catching a bit of a break. But you don’t have to look far to find disorienting impacts from the climate crisis.

From Vancouver Island through the central interior and into the North, resilient people are facing off against powerful forces unleashed by fossil fuel induced global warming.

Join Dogwood staff on a journey through our changing province. Let’s take advantage of this relative calm to shine a light on the emerging challenges people across our province are up against. Listening in on their experiences might help us better understand the storms all of us will face, sooner rather than later.

Telegraph Creek: the fire that can’t be put out

In July of 2018 Heather Hawkins was newly pregnant with her daughter Katsima. In order to get an ultrasound, she had to make a ten hour drive south from her home of Telegraph Creek in the Tahltan Nation to Terrace. She packed for what she thought would be an eight day trip and set off with her partner and infant daughter, Violet.

While Heather was away, a fire broke out at Alkali Lake, seven kilometers northwest of Telegraph Creek. The next day, someone discovered another fire to the northeast, on the opposite side of the Stikine River.

According to residents, the B.C. Wildfire Service did not immediately begin work to extinguish the fires. Instead they observed the fires for a couple days. Then the wind picked up, and one fire jumped the river to merge with the other.

Telegraph Creek’s residents received an evacuation order — Heather was told she couldn’t come home. She joined family members in the neighbouring community of Dease Lake, waited, and eventually moved to Terrace to give birth to Katsima.

While Heather’s community experienced wildfires before, they had never witnessed destruction on this scale. All told Telegraph Creek lost dozens structures, many of them people’s homes.

The fire went dormant over the winter. A year later, it still burns deep underground in several spots around Telegraph Creek. Fire crews are unable to fully extinguish it. Poor air quality from the smouldering fire has caused many with vulnerable immune systems to develop illnesses. In April, Heather’s two children were medevaced to Terrace and Vancouver after they both developed respiratory viruses.

A scar for years to come

Coming together as a community has helped the Tahltan people of Telegraph Creek cope and begin to heal. But the fire also left a scar. And now the area is more vulnerable to landslides. That adds another potential threat to annual salmon runs if the Stikine is impassable – as we just saw happen on the Fraser. In the short term, scorched forests push surviving animals like moose, goats, sheep and bears elsewhere to seek shelter and food.

Heather writes about the fire in the Tahltan Nation’s newsletters as a way to help people in the community continue to process the event. She asks for compassion from those outside the community as they adjust to a new reality. Moving forward, she believes that various levels of government need to improve their collaboration and work together to develop better response plans to face these coming challenges — not just for her community, but any vulnerable to wildfire.

As we drive toward the Nemiah Valley I’m struck by the size of the mule deer bucks grazing in the fields, their antlers still in velvet. This is Tsilhqot’in territory — and Ts’ilʔos (Tatlow Peak) casts an unforgiving eye over landscapes of high plateaus, rugged peaks, and fjord-like valleys.

The deer in the fields by the road are old enough to have escaped 2017’s massive Chilcotin fires – or they’ve moved in since, attracted by the new vegetation. Those fires moved at a speed that people living here say they had never seen before. So fast that even the fleetest of forest creatures could not escape. 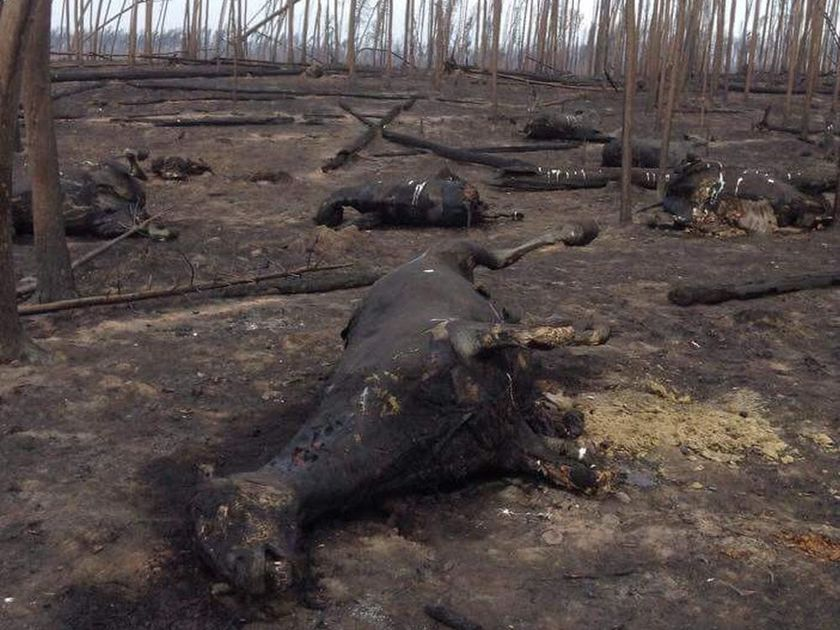 In April the Tsilhqot’in people released a report entitled “The fires awakened us.” It’s a unique reflection on how the fires simultaneously devastated and galvanized their people. From an outsider’s perspective I took a couple of lessons away that could be applied to most communities: First, people who know their land are best positioned to defend it; Second, in situations like folks in the Chilcotin faced in 2017, where any firefighting effort was going to be overwhelmed, local people know what to prioritize.

Unfortunately this summer the climate crisis returned in a different form. A new phenomenon in the interior is the development of Supercells during the summer. Supercells are unpredictable cloud formations that materialize seemingly out of nowhere. They’re completely different from other weather systems – they don’t move. In mid July one formed over the Chilcotin Plateau and dropped record amounts of rain over vulnerable fire-scarred soil. 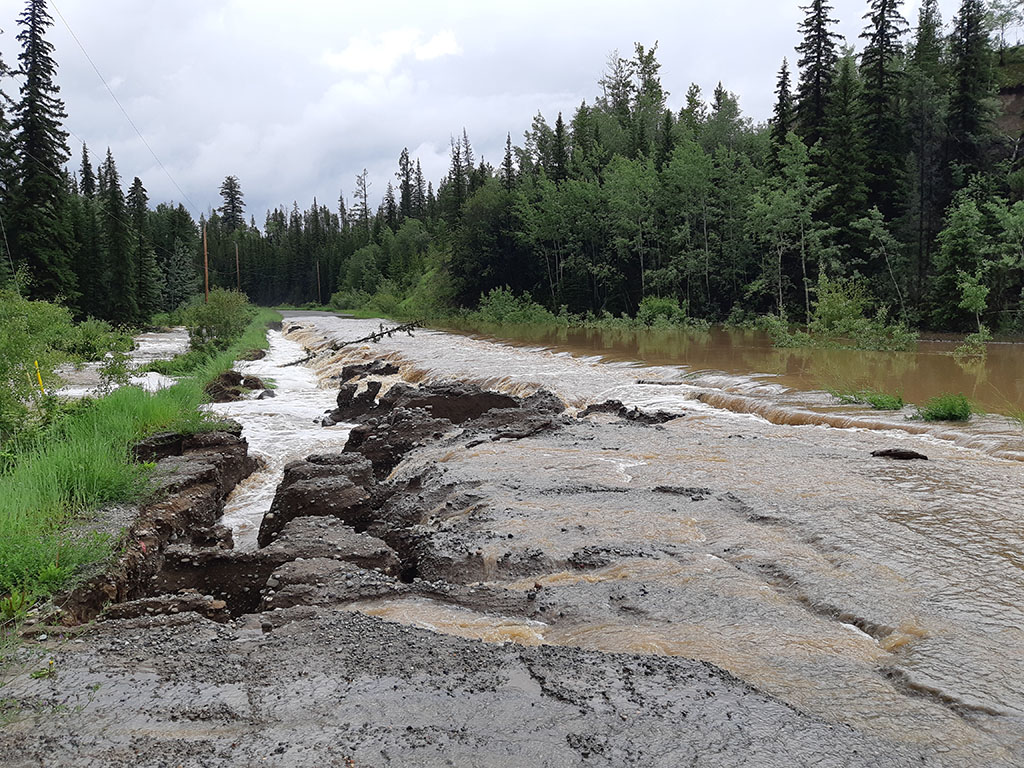 Scores of roads and culverts were washed out and bridges were compromised. When the rain stopped, the provincial government prioritized fixing the roads Taseko Mines needed to access its proposed worksite at Teztan Biny (Fish Lake) before roads linking Tsilhqot’in communities.

Perhaps that was a coincidence, but as the climate crisis intensifies we need to be vigilant. Corporations are wired to seek profit, and times of crisis always present opportunities to further commercial interests. We need to make sure our governments prioritize the public, and people’s wellbeing, as we navigate the decades to come.

If B.C. has a sport-fishing Mecca, it’s the salmon grounds off northern Vancouver Island. Residents from across western Canada and tourists alike deploy in convoy-like fashion to small harbours. Their quest to catch fish in spectacular scenery is supporting a revival in towns depressed by the collapse of commercial fisheries and shuttered sawmills – victims of an over-exploitation / changing climate double whammy. 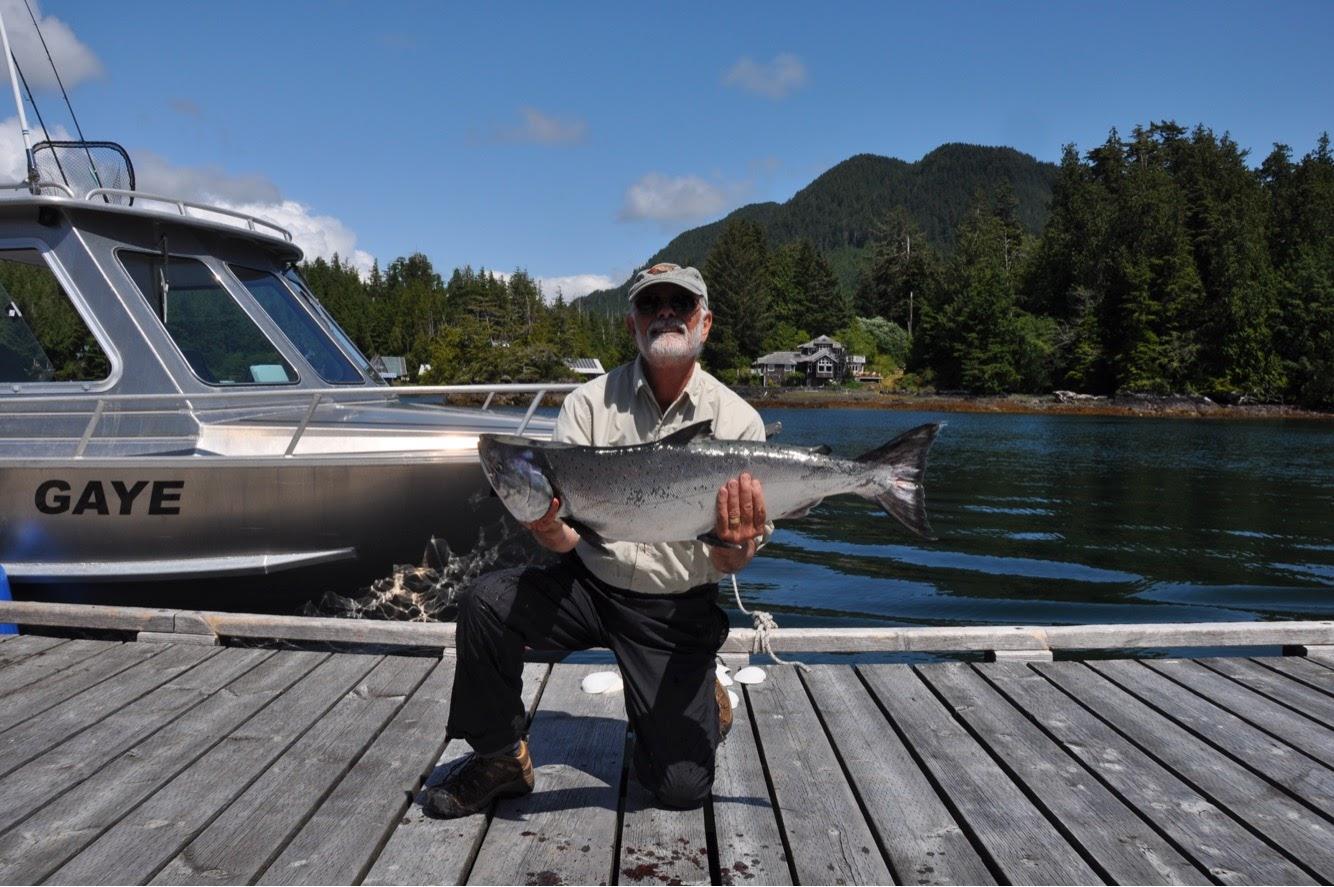 The early season closures which take a Chinook away from a guide and give it to an Orca are meant to stave off the starvation haunting southern resident whales. At long last these iconic symbols of B.C. are getting meaningful attention. Of course, guides blame the Feds for choosing Orcas over them. They should blame Ottawa for failing to heed the alarm bells rung for so many years by the science community. The irony is this policy is fronted by a government still plowing billions of tax dollars into oil industry expansion, which will only further jeapordize salmon recovery.

Drought threatens salmon at both ends of life

I’d wager many people lucky enough to feel the strong tug of a wild coho at the end of their line don’t realize these acrobatic fish spend 18 months in small streams — the very type that nearly dried up this spring. I recorded the impact first hand. My son and I, along with hundreds of volunteers, intervened with traps and nets to move stranded fry and smolts to nearby rivers with reservoirs that can guarantee stream flow. If we hadn’t they would have cooked. 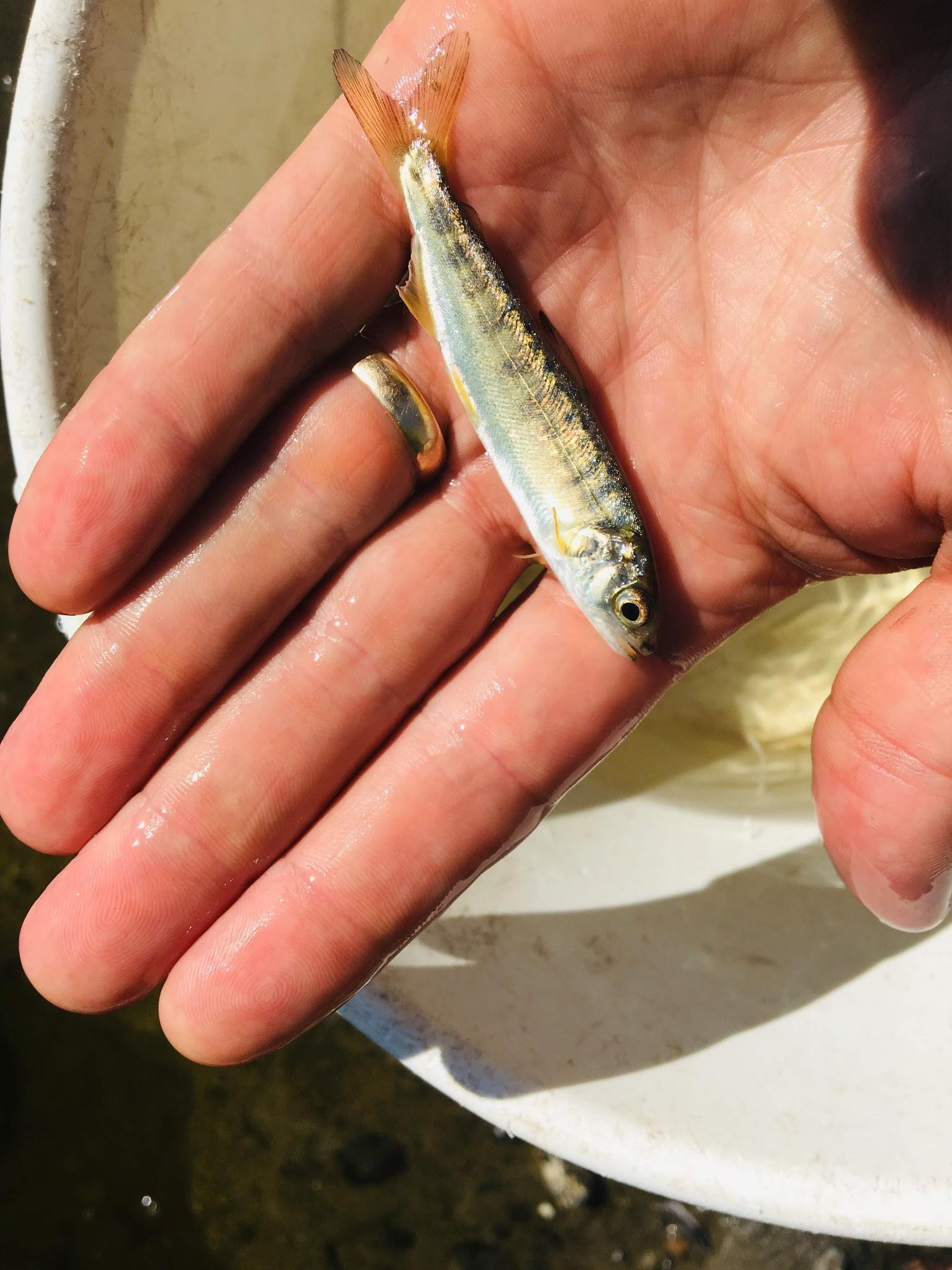 It would be disingenuous to lay all the blame for the trouble salmon are facing on climate. But there can be no doubt that whether restoration efforts are focused on enough water for Coho or enough food for Orcas, neither stand a chance if government does not radically regulate emission reductions.

Happy B.C. Day. Dogwood staff and volunteers are ranging further and wider as we build new campaigns to tackle climate change and defend B.C. communities. As well as fighting in our big cities to improve our democracy and protect our environment, you’re going to see us supporting youth climate strikers across B.C, solar farmers in the Cowichan Valley, and Indigenous people working to modernize B.C.’s invasive mining practices. We do this with your generous support. If you’ve enjoyed this journal, please share it with a friend or family member.

With files from Noal Amir

One response to “Into the climate crisis: a British Columbia journey”