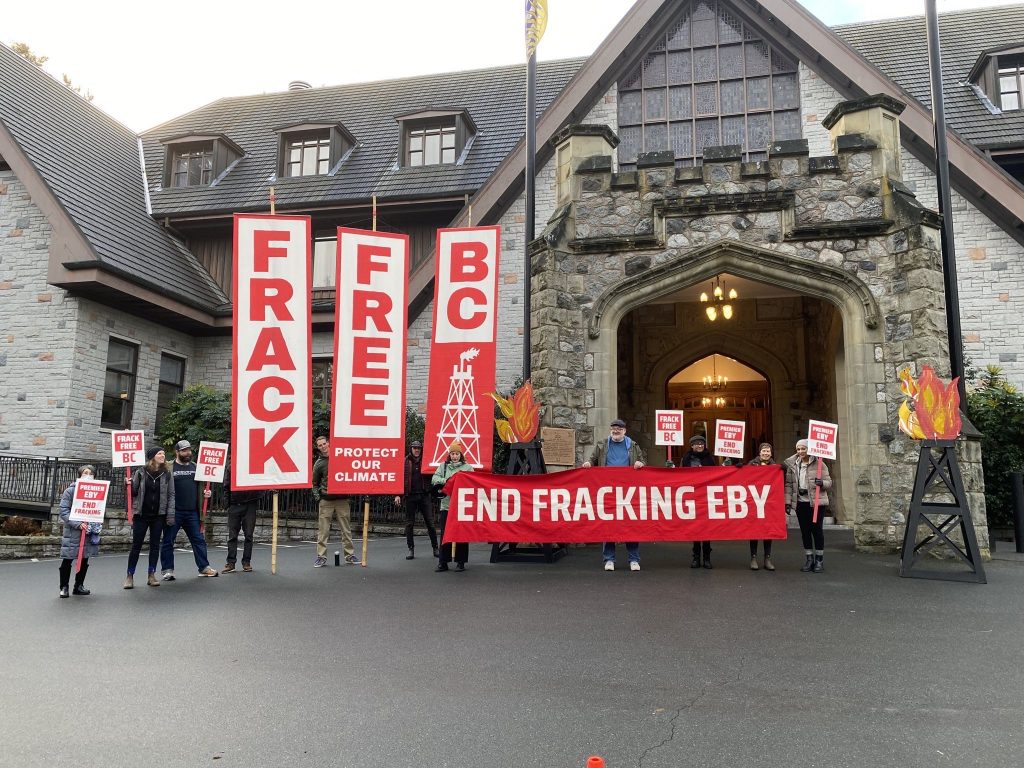 Unceded Territories of the Songhees, Esquimalt and W̱SÁNEĆ Nations — A new alliance of environmental groups called Frack Free BC erected fracking rigs on the front lawn of Government House today during the Cabinet swearing-in ceremony. The coalition is calling on Premier Eby to follow through on his climate promise to stop expanding fossil-fuel infrastructure, especially fracking which is used in 91 percent of B.C. gas production.
Photos of the action will be uploaded to this drive throughout the day and will be available for media use.

Emissions from B.C.’s gas industry are poised to explode if five proposed liquified natural gas (LNG) projects on the West Coast are approved, built, and supplied with fracked gas. That makes fracking and LNG exports among the highest stakes political issues for the BC NDP. Eby and his new cabinet have two significant fossil fuel decisions to make early in their term surrounding the Tilbury Marine Jetty LNG project in the mouth of the Fraser River — a decision that was delayed late last month — and the Cedar LNG project in Kitimat.

B.C.’s oil and gas industry is already responsible for 19 percent of the province’s total greenhouse gas emissions, creating 12.4 megatonnes of carbon dioxide equivalent in 2020, the most recent year for which data is available. That amounts to adding 2.7 million passenger vehicles to B.C. roads for an entire year.

Right now, there are more than 27,000 fracking wells in B.C., largely in the northeastern part of the province. Fracking is harmful to water, air, land and human health. People who live in communities close to fracking sites experience increased rates of rare cancers and reproductive concerns. Frack Free BC is calling on Eby to stop issuing permits for fracking, and set a date to phase out this toxic and dangerous industry.

To date, B.C. is not doing its part: The Province’s 2022 Climate Change Accountability Report shows B.C. will miss its 2025 target by at least 15 percent — largely due to LNG Canada coming online that year. It would be supplied by the Coastal GasLink pipeline, which Wet’suwet’en hereditary leaders and community members continue to oppose. This week marks the 25th anniversary of the Delgamuukw-Gisday’wa Supreme Court decision, which affirmed Wet’suwet’en and Gitxsan title over their traditional territories.

B.C.’s emissions from oil and gas have continued to rise, with provincial gas production projected to double from 4.5 billion cubic per day (bcf/d) to 9 billion bcf/d by 2030 to feed the proposed LNG projects, which will make it impossible to meet B.C.’s climate targets.

Increases in gas production are projected despite international agencies, including the International Energy Agency and the United Nations, repeatedly calling for no new coal, oil or gas projects and to accelerate investment in renewable energy instead to halt climate change.

B.C. is also on track to fall short of the 2030 target, a gap that would only expand if new LNG projects and the fracking required to supply them move forward.

“Many British Columbians might be surprised to know their province allows fracking for gas but the veil is coming off B.C.’s most polluting industry and a growing movement of people is coming together to prevent these LNG proposals from blowing our climate commitments.”
Peter McCartney, Climate Campaigner, Wilderness Committee

“Premier Eby is right: we can’t keep expanding fossil fuel infrastructure and still meet our climate targets. We are here today to make it clear that the new Cabinet’s actions on fracking and LNG will be the litmus test for the BC NDP’s commitment to climate leadership, and will be closely watched by climate voters within and beyond the party.”
Alexandra Woodsworth, Campaigns Manager, Dogwood

“Gas is BC’s fastest growing climate problem. LNG Canada Phase 1 will be the key culprit in BC not meeting its 2025 climate target, and lead to a massive expansion of fracking in northeastern BC. Fracking and its fracked gas pipelines and export terminals are bad news for the climate, and communities. With the launch of this campaign today to end fracking in BC, we are letting the Premier and his new cabinet know that this needs to be a top priority – we need action now.”
Kiki Wood, Senior Oil and Gas Campaigner, Stand.earth

“Wet’suwet’en hereditary chiefs took Canada to court in 1987 to prove our existence as a sovereign nation, and in 1997, the Supreme Court of Canada acknowledged that Wet’suwet’en Aboriginal Title was never extinguished by Crown (Canadian) Title and that the rightful title holders were the house groups led by the Hereditary Chiefs. 25 years later, Eby chose to criminalize Wet’suwet’en people on their own lands, violating basic Indigenous and human rights, and continues the states’ colonial project destroying pristine waters and salmon spawning ground contributing to the climate crisis.”
Sleydo’, Molly Wickham, Gidimt’en Access Checkpoint Spokesperson

“Premier Eby was the Attorney General during the violent and illegal raids and arrests of Wet’suwet’en People and supporters. Now as Premier, he must stop these violent acts and publicly state that these projects that add to the climate catastrophes will no longer be supported and funded by British Columbia.”
Chief Na’moks, Wet’suwet’en Hereditary Chief