Clark says favouritism to donors ‘should be illegal’

Let’s play a game. How many examples can you find?

Guess who said this on CBC radio last weekend?

“Here’s the problem that happens, that people should be concerned about. It’s when private donors give money to political parties, and then governments make decisions in favour of those private donors because they’ve given them money. That’s what all the rules are there to protect us against. That’s what Canadians don’t want, and it should be illegal. And it is illegal, in British Columbia. We’ve got a really robust system to protect against that.”

“The protection that people need and that they have in B.C. is a really robust system that protects against anybody giving money, and that being connected to a decision that government has made in their favour. That’s the problem we have to protect against. Whatever anybody tells me or donates to me or my party, it cannot be connected to decisions we make on behalf of the people in B.C. And it’s not.”

Let’s unpack this a bit.

She’s right. British Columbians should be concerned about this problem. Because whether you’re talking about the Vancouver housing crisis or trophy hunting for grizzly bears, major political donors are making major amounts of money thanks to Clark’s policy decisions.

The Premier’s defence is that unless you have a recording of her promising preferential treatment in exchange for cash, it could all be a coincidence.

But as Andrew Coyne wrote last week in the National Post, “This is not a criminal trial. It is not up to the public to prove, beyond a reasonable doubt, that their leaders are corrupt. It is up to the premier, as the holder of a public trust, to conduct herself in such a way as to prevent any such suspicion arising.”

To demonstrate, let’s play a game:

1) Take any industry and an influential stakeholder within it.

For this example we will draw on Clark’s darling, the Liquefied Fracked Gas industry (or “LNG” as she affectionately calls it).

Let’s look at Malaysian state-owned gas company Petronas, which has applied to build a gas export terminal on top of Lelu Island’s Flora Bank, a crucial piece of salmon habitat near Prince Rupert.

2) Go to the Elections BC donations database.

This contains all the recorded donations over $250 made to politicians in B.C. since 2005. (It does not include donations made outside of election years at the municipal level, because those are secret.)

You can click here to search the provincial donor database.

This can get tricky, because companies donate under a lot of different names.

In 2012, Progress was acquired by Malaysia’s Petronas, after which it donated another $18,000 as “Progress Energy Resources Corp”.

Then after striking a deal with Chinese state-owned oil company Sinopec, the group began donating to B.C. political parties under the project name Pacific Northwest LNG.

The timeline of the Pacific Northwest LNG donations reveals some interesting comparisons with government decisions. Here are some highlights: 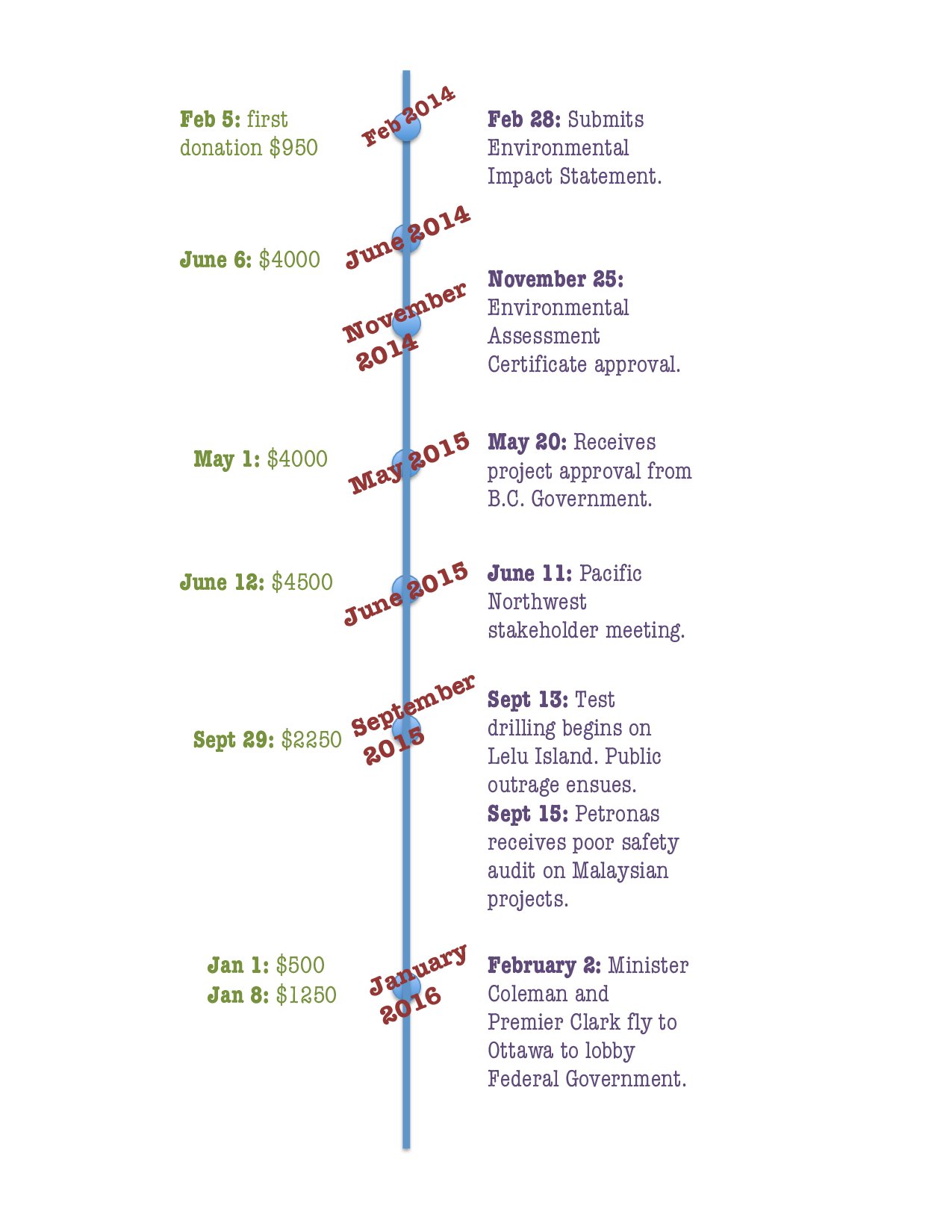 If you haven’t been counting, I’ll do the math for you. The total political “investment” made into Pacific Northwest’s LNG terminal on Lelu Island is $117,050. The returns, if the project is approved, will be astronomical.

Maybe these corporate donations (and the annual cut Premier Clark receives from party coffers) are not connected to Premier Clark’s decisions. Maybe it’s all just a big crazy coincidence.

Or maybe those baby fish just don’t have deep enough pockets. After all, with foreign investors moving in, their real estate market just got a lot more competitive.

8 Responses to “Clark says favouritism to donors ‘should be illegal’”