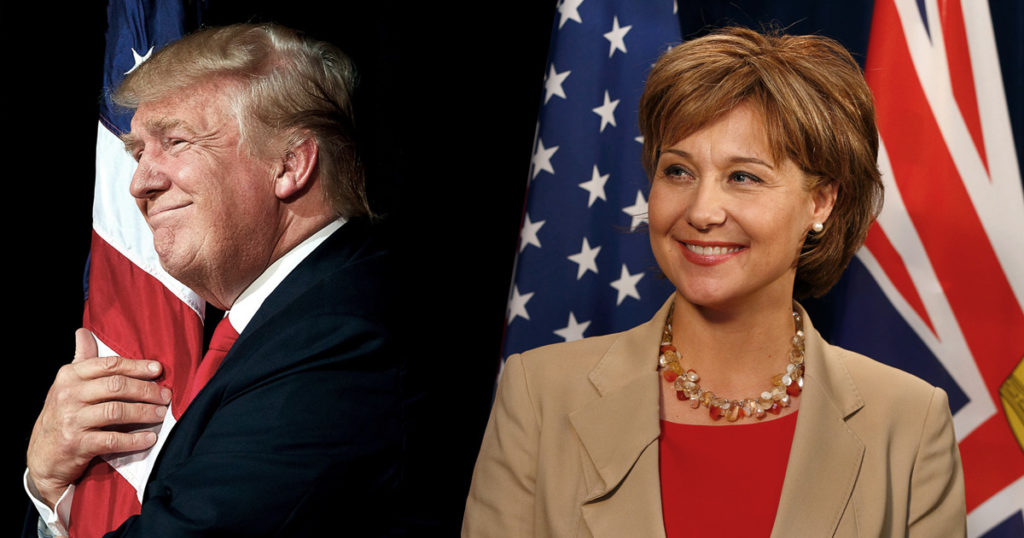 Christy Clark’s campaign is funded by the Trump Tower developers and Trump-friendly U.S. corporations. Her campaign pollster worked for the Republicans. And she has support from at least one pro-Trump Super PAC. But in the dying days of the election, Clark is campaigning against Donald Trump – and it could put her back in the Premier’s office.

Ironically, Clark’s message is aimed at some of the voters hurt most by her economic policies. Behind her “Bright Future” slogan lies a province that has become a hollowed-out, dystopian nightmare for many in both urban and rural B.C.

Pigeons spotted making a nest out of #needles in a #DTES SRO room. Sad reality of the #opioidcrisis #fentanyl #frontline #notstaged pic.twitter.com/M0DDVLkL28

In Vancouver, pigeons are literally raising their young in a nest of used needles. Ambulances scream past empty storefronts and $2-million dollar teardowns, while working families hang on by their fingernails. Meanwhile, our forestry towns have lost 30,000 good paying jobs as international lumber companies ship raw logs to the U.S. and China. 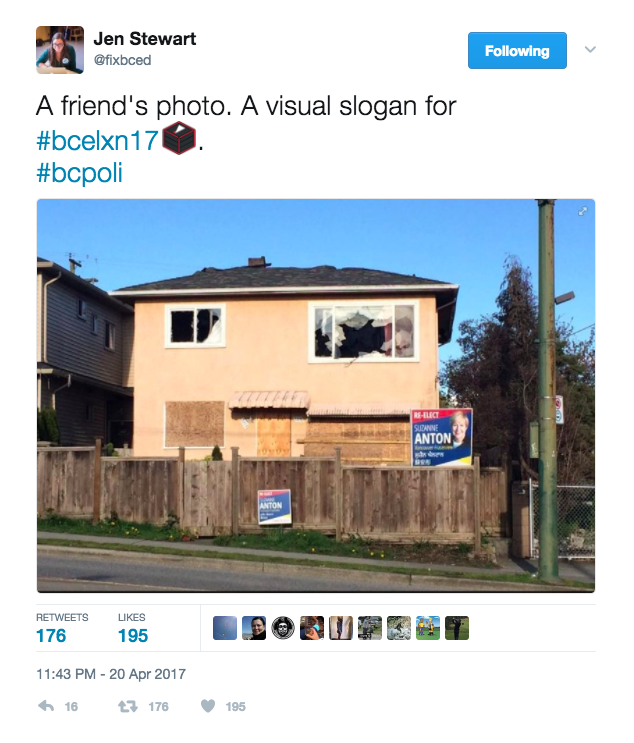 Today’s in-depth Angus Reid survey contains numbers that should be devastating to any Premier seeking reelection, never mind a corporate-funded incumbent whose party has held power for sixteen years:

The key finding? “British Columbians are three times as likely to say the province’s financial situation has worsened as they are to say it has improved.”

Most people know at a gut level that B.C.’s economic “success” is a fantasy, fueled by unsustainable growth in house prices, consumer debt and hidden taxes. Voters are spooked. But there’s one thing British Columbians fear more than four more years of Clark, and that’s Donald Trump.

Here at Dogwood we struggled for months to get voters and volunteers jazzed about the upcoming election. But the unfolding debacle in the White House was sucking up all the available oxygen: the people who care most about politics were transfixed by Donald Trump.

Online polling and conversations with organizers confirmed it: there was no way a local non-profit running a nerdy “get out the vote” campaign could compete with the gravitational force of Trump. So we decided to harness it instead.

Handbills! Coming soon to a campus, street corner or transit station near you. Design by @erikarathje. #bcpoli pic.twitter.com/16btx2Evib

We’ve had to reprint our handbills three times because they flew out the door so fast. We tried testing a fun, empowering image on our election website, VoteBC.ca. It tanked. Apparently the most motivating thing in B.C. politics right now is the U.S. President’s smirking face.

I just didn’t think the BC Liberals would be brazen enough to adopt the same frame, given their clear ties to Trump-friendly corporate interests.

It was one of Christy Clark’s U.S. donors, Weyerhaeuser, that lobbied the American government to impose a punitive border tax on B.C. lumber. But instead of waiting and working with federal trade negotiators, Clark leapt at the opportunity to go it alone against the U.S. log barons – and Trump.

Clark is at her best when she gets to play the role of a champion or defender, standing up for B.C. jobs against those who would take them away. Those enemies can be external (Alberta, the U.S., “a rising tide of protectionism”) or internal (“the forces of no,” the sinister NDP, the out-of-touch “Doctor Weaver”).

She’s hitting her stride now, zeroing in on the populist sweet spot that won her the last election. The notion that she can (or will) tackle Trump is utter nonsense. But as the final days melt away, the opposition parties are struggling to counter her story.

Many NDP campaigners still seem to believe that voters are persuaded by facts and figures, or that voters are fundamentally rational in their choices. They also see polls showing their party in the lead, and – despite what happened in 2013 – are starting to talk about what they’ll do in government.

The Greens hold a similar faith in rational behaviour, with an added blind spot. Green support is highest in the happy kingdom of southern Vancouver Island, which has been insulated until recently from both the worst of the housing market and growing economic desperation in the interior.

Both opposition parties have adopted certain populist, emotional messages. NDP leader John Horgan’s righteous anger on behalf of society’s most vulnerable is landing well with supporters. Green leader Andrew Weaver’s appeal to fix a broken two-party system taps into the hopes of those with hope to spare.

But fear can overwhelm either anger or hope, and has swung many elections in the past. Christy Clark can’t run another campaign on made-up promises about LNG or a “debt-free” province, so she’s falling back on fear. Fear of things getting even worse. Fear of a nuclear-armed orange gargoyle throwing your family into poverty with the stroke of a pen.

Will she stand up to her own campaign donors after the election? Doubtful. Can a provincial premier go toe-to-toe with the biggest economy in the world? Yeah, right. The reality is, Clark’s self-serving policies have made British Columbia weak and fragile at a time when we need to be strong.

Everything depends on voter turnout

Why are polls moving in the BC Liberals’ favour, even under a barrage of negative press? Right now Clark is reaching exactly the voters she needs to, even if you can’t see it happening. Thanks to psychographic targeting, hidden “dark posts” and a lax approach to fake news, Facebook has become a super-charged voter manipulation machine.

Online advertising is fundamentally Darwinian: the brand with the most money to spend gets to put its message in front of its preferred customers. And if there’s anything the BC Liberals have, it’s money. Parties with cash to burn can pluck individual targets out of a crowd, harvest their email addresses and follow them around the Internet, shaping their mental reality.

But at the end of the day, each person still needs to travel to a polling station, stand alone in a cardboard booth and mark a ballot with a real pencil.

Clark’s campaign can scare the bejesus out of people who are already struggling and confused. She can offer herself as their political champion, ready to slay the protectionist American dragon. But there are only so many people left in the province who believe her.

If enough people show up who want to ban Big Money, fix our broken political system, restore B.C.’s beautiful environment and send Texas oil tanker projects packing, Clark’s army of fear will be outnumbered. The choice is up to voters. As Clark famously told retired social worker Linda Higgins, “that’s why we live in a democracy.”

To join a Dogwood phone bank and help us crank up voter turnout, head to VoteBC.ca