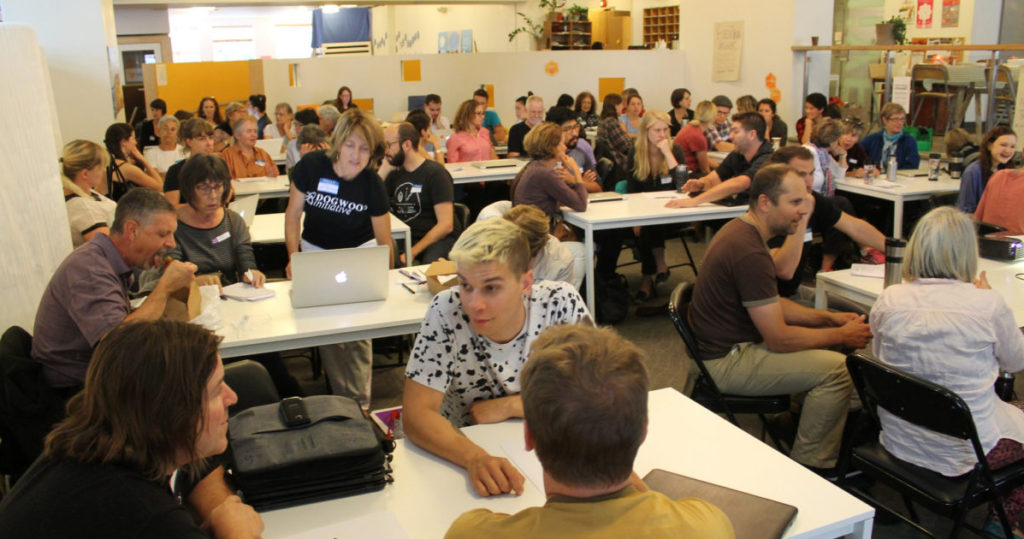 You can’t out-message the organized

Investors who stand to profit from projects like Enbridge Northern Gateway, Kinder Morgan’s oil tanker project or Woodfibre LNG are not going to give up on those projects without a fight. Their enormous financial advantage is now spilling over into newspaper editorials, television ads and Facebook videos that pop up on your newsfeed. We’re under siege, and I’d like to explain that while this “air war” fascinates me, it doesn’t scare me.

Did you see this video from the Independent Contractors and Business Association of British Columbia, about a hardworking man who walks out his front door to be confronted by screaming activists?

“He’s got a family to support but can’t make a decent living,” the narrator explains. “Our province is being held hostage by a loud few with too much free time and very few facts.”

“We’re tired of a promising future constantly being blocked by no.”

The video, produced by Fill in The Blanks studio in Abbotsford, neatly divides people who care about families and jobs from people who oppose specific industrial projects, creating a false binary. It also frames people who say no to projects as people who do not care about a “promising future,” a ridiculous claim that echoes Christy Clark’s “forces of no” comment in January.

Interestingly, the video debuted within two weeks of the premier’s comment, during the Super Bowl. When I showed ICBA videos to a colleague, her first response was to point out that the messaging is eerily similar to that of the BC Liberal Party.

Meanwhile, have you been hearing some of the following lines?

-“We don’t have to choose between pipelines and renewable energy.”

-“We need to build oil pipelines to transition to a green economy.”

These messages are part of the air war, which is being fought by some very clever people who have lots to gain from building new fossil fuel infrastructure. But here is why I’m not worried about messaging when it comes to Enbridge or Kinder Morgan:

You can’t out-message the organized.

This is something I heard in a training, and I think about it a lot. It means that if people have already had real face-to-face conversations with family, friends, neighbours, colleagues, or trusted acquaintances, have identified what they value, and have come to see that standing up for those values is a possibility and even a responsibility, then industry advertising just bounces off.

Yes, some people will change their minds. They will hear the “green pipeline” frame enough times to believe that somehow Canada can be a climate leader and build massive crude oil infrastructure at the same time, or that we can fight forest fires by fracking more gas in northern B.C. Hundreds of thousands of people in B.C., though, will not bend their values and their own vision for a promising future to accommodate these frames.

Too late to the ground game

For years, organizers at Dogwood have been identifying people who want local decision-making power over air, land and water. We have been keeping up a conversation with them and connecting them in neighbourhood teams across the province. Those teams talk to more neighbours at farmer’s markets, festivals, on street corners, and at the doorstep. This work is not always easy. A man once gave me the finger, and another made my friend cry – but it’s worth it, because it makes British Columbians powerful in times like these. This is what’s called the ground game.

While I am actually impressed by ICBA’s videos – they deal in emotions, individual stories, values, and all the other materials of mind-changing – I will not be worried until I see their volunteers at my doorstep. We are too far ahead.

I’m reminded of the scene in Indiana Jones and the Last Crusade, when Indy tells the villains not to bother trying to catch up with his friend: “He’s got a two day head start on you, which is more than he needs. Brody’s got friends in every town and village from here to the Sudan, he speaks a dozen languages, knows every local custom. He’ll blend in, disappear, you’ll never see him again. With any luck, he’s got the grail already.”

The only difference is while Indiana Jones was bluffing, we’re not.

11 Responses to “You can’t out-message the organized”