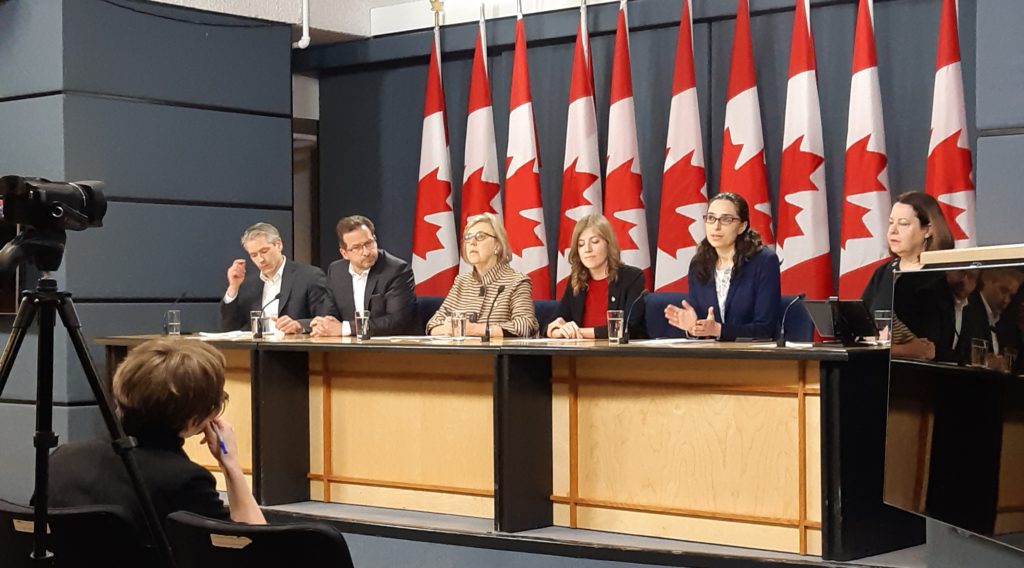 OTTAWA – Only 16 per cent of Canadians approve of the federal government spending more than $12 billion to build the Trans Mountain expansion pipeline, according to a national poll released today by Nanos Research. Meanwhile, 59 per cent of people in Quebec (43 per cent in the rest of the Canada) say taxpayers shouldn’t pay a cent toward the project.

Environmental and law groups are in Ottawa this week, briefing members of parliament about the economic risks of borrowing more money to continue construction on the project. Trans Mountain’s new estimated cost of $12.6 billion comes on top of $4.5 billion spent by Ottawa in 2018 to acquire the existing Trans Mountain system.

“Canadians are rightly alarmed that the Trudeau government is spending billions of our tax dollars to expand the oil sands while the majority are uncomfortable building Trans Mountain with borrowed money,” said Patrick Bonin of Greenpeace Canada. “Quebec voters in particular want to see the government not waste that money on a project our climate can’t afford.”

“The pipeline’s shocking new price tag is a game changer for the Trans Mountain project,” said Sven Biggs, climate and energy campaigner at Stand.earth. “An overwhelming majority of Canadians do not want to spend $12.6 billion taxpayer dollars on an oil pipeline. It’s time to change course before borrowing billions more to ramp up construction, and invest instead in clean energy and direct support for struggling workers in Western Canada.”

Canada’s deficit is projected to grow to $26.6 billion by the end of the fiscal year in March, up from $18 billion in 2018-2019. Because pipeline construction is not in the federal budget, the government needs to borrow additional money to build the Trans Mountain expansion.

“Canadians are increasingly uncomfortable with the burden of debt the government is taking on to finance ballooning construction costs. And in the middle of an affordability crisis, Canadians don’t want to see their hard-earned tax dollars wasted trying to prop up a white elephant,” said Alexandra Woodsworth, campaigns manager at Dogwood.

The groups are also revealing new information based on regulatory documents showing that taxpayers gave a $3.9 billion windfall to oil companies including BP, Imperial and Total when Trans Mountain failed to pass on the increasing construction costs to its customers in the form of increased toll rates, something the Federal government allowed. (1) Because the tolls don’t cover the costs of running the business, this undermines the project’s profitability and the likelihood of finding a buyer. This latest subsidy also contradicts the Minister of Finance’s claim that the government is operating Trans Mountain on a commercial basis.

“Kinder Morgan walked away because it saw its future profit margins getting eaten up by soaring costs,” said Eugene Kung, from West Coast Environmental Law Association. “The government’s own advisors in the Parliamentary Budget Office have confirmed that delays and rising costs like those Trans Mountain is now facing make the project uneconomical to build. The federal government has to make a decision: saddle taxpayers with the multi billion dollar cost of a stranded asset, or save those billions by changing course while there’s still time.”

[1] When the federal government approved TMX for a second time in June 2019, the new approval triggered a clause in Trans Mountain’s contract with its customers (the oil companies who will ship oil on the new pipeline) provided the opportunity to raise tolls to reflect the majority of cost overruns beyond the $7.4 billion that was budgeted for when the project’s original certificate was issued. The company chose to absorb the costs instead, and neither its federal government owners nor the Canadian Energy Regulator intervened. At a new estimated cost of $12.6 billion, that works out to a $3.9 billion subsidy. Further information available in the media backgrounder, and a detailed brief by independent economist Robyn Allan.