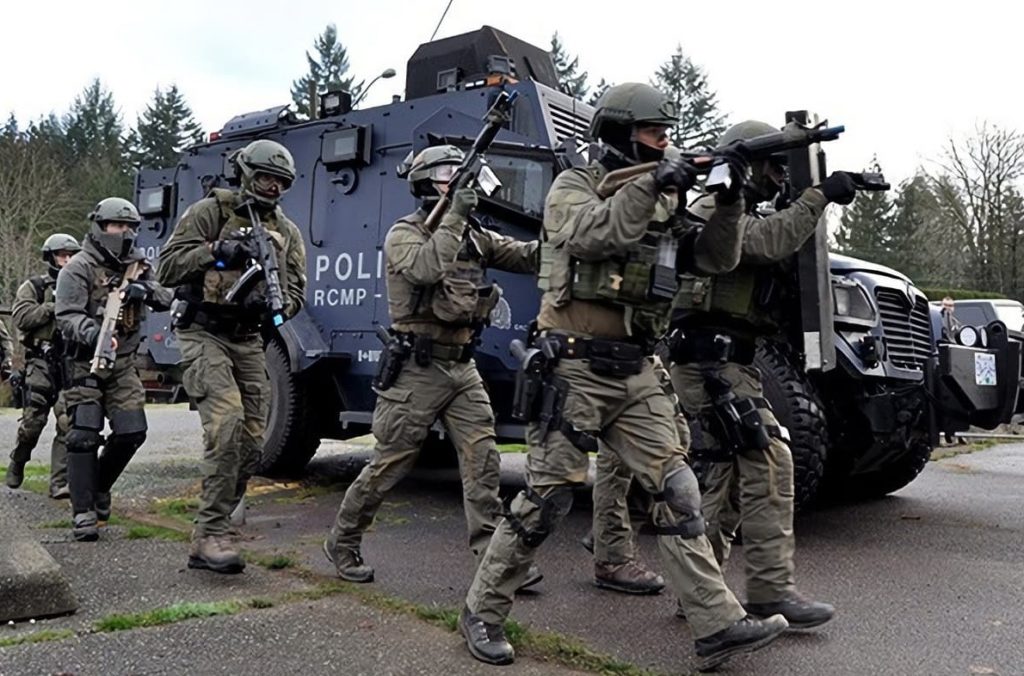 B.C. has its own militarized, violent and yes, racist cops

Their next mission? Punch another pipeline through Indigenous lands

Canadians can shake our heads at police brutality in the United States, but the same tactics and equipment are used in our country, with alarming numbers of Black and Indigenous people hurt and killed.

Irene Joseph, a Wet’suwet’en elder using a walker, was stopped at a shopping plaza in Smithers, B.C. by RCMP constable Darrin Meier. Falsely suspecting her of shoplifting, Meier threw her on the icy sidewalk and jumped on top of her, trying to force her into handcuffs.

Last week a B.C. Supreme Court judge found that Meier “falsely arrested, falsely imprisoned, assaulted and battered” Irene Joseph. Would a white woman in her 60s using a walker have faced the same treatment? It’s laughable to even suggest.

Less than an hour down Highway 16, the “Highway of Tears,” a platoon of RCMP officers massed on a snowy road outside Houston, B.C. Armour-clad tactical teams swept into unceded Wet’suwet’en territory in 2019 and again in 2020, pointing sniper rifles at land defenders and arresting women mid-ceremony. Why were they there? To force a pipeline through.

Dale Culver, a Wet’suwet’en construction worker, moved to Prince George for job training. One night he was riding his bike when he was stopped by five RCMP officers. Minutes later, Culver was dead. Police told witnesses to delete videos of the incident on their phones. After three years, B.C.’s Independent Investigations Office has recommended charges against all five cops involved.

The definition of ‘systemic’

These are examples from one corner of one province, involving members of one Indigenous nation. Multiply these incidents across the country and it becomes clear we have a problem. The RCMP keeps a database on police killings, but refuses to release it to the public. So CBC News analyzed 461 deaths between 2000 and 2017.

They found that police killings are on the rise. They found that Black people and Indigenous people were killed at rates three times higher than their share of the population. That doesn’t happen because of a few bad apples. It happens because our systems and institutions make some people more likely to find themselves at the end of a police gun — and make officers more likely to pull the trigger.

Toronto journalist and activist Desmond Cole recently compiled the stories of 27 Black, Indigenous and other people of colour killed by police, including three in just three days in April. Then last week, as protests erupted against the murder of George Floyd by an officer in Minneapolis, Regis Korchinski-Paquet fell to her death from her balcony in Toronto. Her family blames the police.

So no, we don’t get to look at the United States and claim that those problems don’t exist here. The real question is why we’re not more outraged by what’s going on.

What does this have to do with climate change?

I am sometimes told to ‘stay in my lane’ by environmentalists who describe issues of racial justice as a distraction from the urgent work of stopping climate change. As I said to one of them, perhaps the reason we have failed to reduce greenhouse gas emissions is because we haven’t attacked the entrenched systems of power that make it possible for corporations to pollute our planet with impunity.

Those same corporations don’t give a fig about human life — especially poor, marginalized, rural or otherwise voiceless people who are in the way of profit. And their power relies on a critical mass of middle-class voters staying distracted, or unwilling to risk their own comforts to defend other people’s rights.

This is about to get very real in B.C. with the government’s attempt to build the Trans Mountain pipeline and oil tanker expansion. Construction started this week on a seven-kilometre spread in Kamloops, which is expected to take seven months. It’s a slow start after years of delay (that is sure to continue) but equipment will soon arrive in the Lower Mainland. Trans Mountain plans to start boring a tunnel through Burnaby Mountain in July.

Canadian taxpayers are not only on the hook for $12.6 billion in construction costs, we also pay for pipeline security. Think of all the money we spend on surveillance, spy equipment, CSIS agents and police to protect oil & gas infrastructure. It’s another massive, ongoing subsidy to an industry that any reasonable person could tell you is dying.

Which side are you on?

You can expect a terrifying show of force by police if any Indigenous communities decide to stand in the way of Trans Mountain. Like we saw at Elsipogtog in New Brunswick or the Gidimt’en checkpoint this February, the RCMP relies on armoured vehicles, rifles, camouflage and dogs to intimidate most people into staying away — and cast those that stand their ground as dangerous insurgents (otherwise why would officers need military equipment?)

But there are two things that serve as a check on police brutality, and may help to hold officers accountable in moments like this. One is video cameras recording their every move. The other is the presence of witnesses with privilege and — let’s face it — light-coloured skin.

If Indigenous people choose to defy injunctions and stand in the way of pipeline construction on their land, it’s imperative they do not stand alone. For the sake of community safety, and to combat disinformation, we will need local observers to bear witness around the clock to actions by police, and likely vigilantes.

Police brutality, the armed defence of private property and the push to dig up oil and build pipelines across stolen land — these are all part of the same violent colonial machine. We must work together to dismantle it, to save lives today and slow the deadly march of the climate crisis.

11 Responses to “B.C. has its own militarized, violent and yes, racist cops”