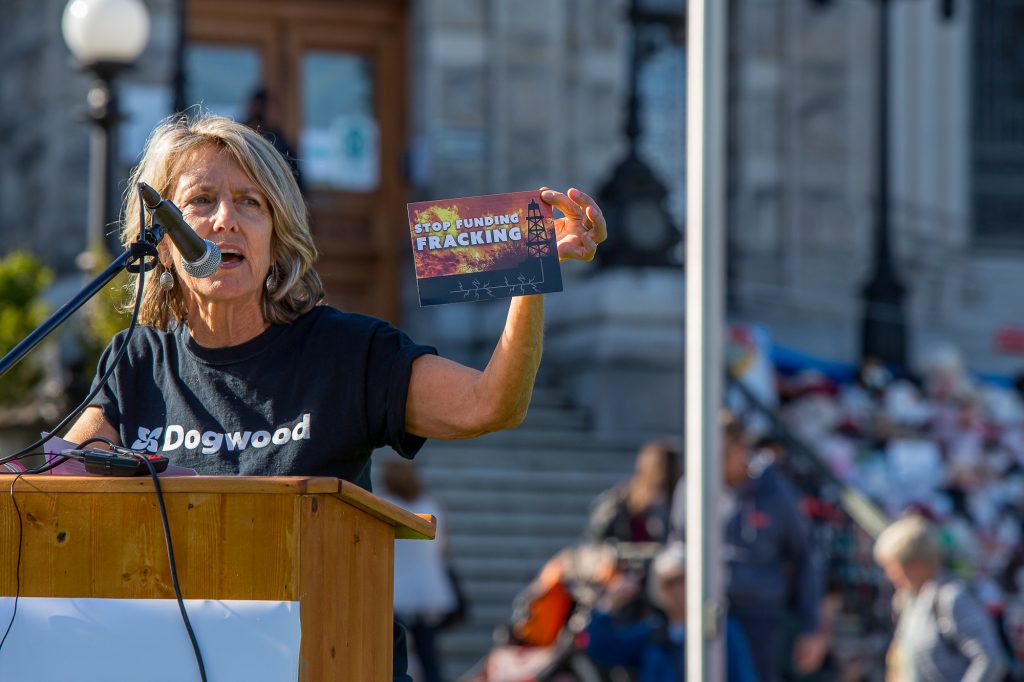 Energy minister Bruce Ralston kept a poker face and quickened his step. Two Beyond Gas organizers followed him out of the LNG conference and down to the sidewalk, peppering him with questions about his government’s support for the fracking industry.

“Why are you here bending to the will of oil and gas executives, rather than protecting the people of British Columbia? They’re the ones who need your help, not rich oil companies that are raking in record profits,” said Alexandra Woodsworth as Paige Gorsak filmed.

Ralston breezed past them. But nine days later, he stood on stage with Premier John Horgan to announce the phaseout of billions in fracking subsidies. “A broken system,” Horgan called it, finally admitting that handouts to companies like Shell and Petronas are a political liability.

Oil and gas companies have made huge profits, while people have faced high fuel costs and the effects of climate change.

We knew this had to change. The system is broken.

That's why we're eliminating the largest fossil fuel subsidy in BC.

It was a stunning reversal from the BC NDP, after many of their politicians spent the past two years telling constituents the province wasn’t subsidizing fracking at all.

A win to celebrate

Horgan and Ralston’s announcement is a victory for tens of thousands of British Columbians who took action with Dogwood, Stand.earth, Wilderness Committee and other allies to demand we stop funding fracking.

It’s a victory for the B.C. public, as the government claims it will collect about $200 million a year in new revenue once the revamped royalty system is in force. It’s a financial and political setback for the gas companies, who have essentially been paid to extract a publicly-owned resource until now.

Now we face a longer, tougher fight over the fate of the gas industry itself. When will the B.C. government stop approving new fracking projects? When will we start retraining workers and seriously investing in renewable energy? How much planet-cooking methane gas will we leave in the ground?

The answers depend on how quickly we can build a citizen-led movement large enough to counter the power of international fracking companies. But we’re on our way.

Turning up the heat

It seems like a no-brainer: in a climate emergency, stop giving public money to the companies making it worse. But the 2020 provincial election made it clear the BC NDP didn’t want to touch the gas industry with a ten foot pole.

Take NDP veterans Nathan Cullen, Fin Donnelly and Murray Rankin. All three served as members of parliament in Ottawa. For years they roasted Stephen Harper, then Justin Trudeau, for blowing taxpayer money on oil and gas subsidies. Then they ran for provincial seats – and instantly fell silent about the issue.

That fall, our friends at Stand.earth released a bombshell report showing just how badly the gas companies were taking advantage of British Columbians. We ran election ads and sent hundreds of e-mails to NDP candidates asking for a response. They kept quiet and coasted to victory.

We knew we had to build a bigger alliance, and turn the wonky issue of fossil fuel subsidies into a simple, memorable demand: stop funding fracking. Our local teams grilled MLAs, sent more than 2,000 handwritten postcards to Horgan, funded radio ads, rallied outside politicians’ offices and on the Legislature lawn.

There are mock fracking rigs on the legislature lawn this morning for @dogwoodbc's event calling on the BC gov to "stop financing the climate crisis via billions in subsidies to oil and gas companies" #bcpoli pic.twitter.com/LRMb1EHsQ7

Every time the world’s unraveling climate spat out another deadly disaster, we asked the same question: why is B.C. still funding the oil and gas industry with public money?

A year after the election, the government finally launched a review of the oil and gas royalty system and invited the public to comment. More than 4,000 Dogwood supporters weighed in, demanding an end to subsidies for fracking companies.

That is essentially what the government announced last week: an end to the “deep well royalty credit” (which cost us $1.2 billion in 2021), an end to a variety of smaller subsidies that companies used to pad their profits and an expiry date for billions in tax credits that companies had banked to reduce their payments in future years.

After 600 British Columbians cooked to death in their rooms, burned alive or died buried in landslides, after tens of thousands of people were forced from their homes, saw their businesses incinerated or flooded with toxic sludge, our government finally seems willing to connect the dots between its policy choices and the deadly consequences of climate change.

But they missed a huge opportunity. A government that was trying to reduce oil and gas emissions would make the cost of extracting methane go up over time. The public would collect more income from less gas until it no longer made financial sense to drill. Horgan didn’t do that.

Using what’s called a “capital cost recovery” structure, the BC NDP has essentially guaranteed that all new fracking operations will be profitable. That’s because every new well gets to enjoy a rock-bottom five per cent royalty rate until the company recovers all the money it spent drilling. Only then do higher rates kick in.

Unfortunately this loophole means the industry’s plan for thousands of new fracking wells is still full-steam ahead. Yes, the companies will pay more for a public resource, and the tax credits are gone. Instead they get a discount at the beginning of each well’s life, with the promise of eye-popping profits if they can sell the gas in Korea or Japan.

That’s why those companies are so intent on building new pipelines and LNG export terminals: to crank up the selling price of B.C. gas. Watch for Horgan and his inner circle to claim fracking is now ethical and subsidy-free, in addition to being clean and green and chock-full of reconciliation. And that brings us to the real issue.

The truth is that fracking is rapidly making the global climate crisis worse. It’s destroying a vast expanse of Indigenous territory five times larger than the Alberta oil sands. And fracked methane is poisoning us in our own homes. Expanding this industry in B.C. is not a ‘climate solution’ – it’s a death sentence for people here and around the world.

It’s time to move on from arguing about what’s a subsidy and what isn’t. With ecosystems and human society coming apart at the seams, only one thing truly matters: removing methane and carbon dioxide from the atmosphere. Not adding more.

We’ve been pretty polite and reasonable up to now, which perhaps politicians have taken for complacency. It’s time for a shift in tone. As Alexandra and Paige showed at the LNG conference, if you’re a politician out in public claiming that fracking is a climate solution, you deserve to be challenged face-to-face.

Dogwood's @awoodsworth and @paigegorsak confront B.C.'s energy minister after his speech at a gas industry conference in Vancouver. If you're a politician out in public claiming that more fracking is a solution to the #climate emergency, this is what to expect. #bcpoli pic.twitter.com/WbQ6wvs7DF

Last week’s royalty announcement is a crack in the armour: an admission from the highest levels of our political establishment that the oil and gas industry has a puppeteer’s arm wedged way up their backside, and it’s starting to look bad.

We can build on that. This summer Dogwood’s Beyond Gas organizers will be resisting gas industry expansion at both ends – challenging the B.C. government’s ongoing approval of new fracking wells for export, and fighting Fortis BC’s dream of hooking up gas pipelines to every home, school and public building in the province. 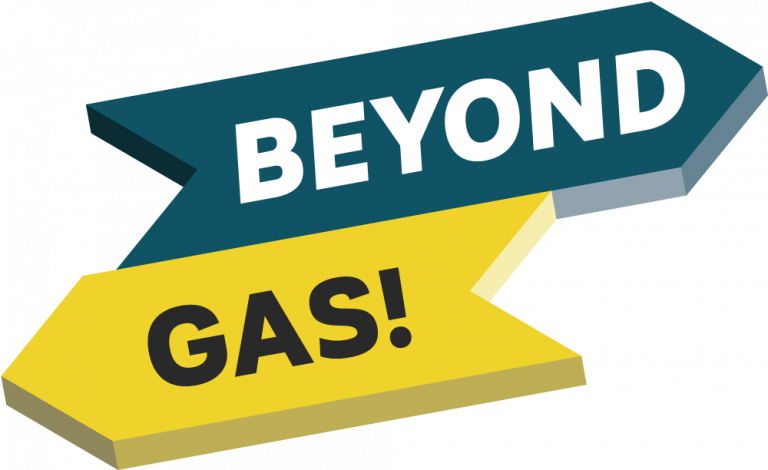 As a first step we’ve launched our Keep Gas In the Ground petition, which you can use as a conversation starter with friends and neighbours concerned about how heat waves, floods and fires are connected to fossil fuel expansion. It’s starting to dawn on people all over B.C. just how bad things will get – and how our politicians are making it worse.

If we can connect with those people across geography and cultural barriers, we can do two things: help each other next time disaster strikes, and work together to force the political changes we need to save lives. If you’re ready to help this summer, join us June 8 at 6 p.m. to learn more.