Posted in Commentary, Election - BC 2017, No Tankers

Written by Will Horter

When they walked in front of the cameras with smiles that threatened to crack their faces, my heart fluttered.

As they began talking about a new era of cooperation in British Columbia and their agreement to “use all available tools to stop Kinder Morgan,” Ban Big Money and bring in electoral reform, I almost began to tear up.

The short press conference Andrew Weaver and John Horgan held to announce the details of their historic agreement could change the trajectory of British Columbia history, if not the country, and the world.

But then I remembered the last time I had felt this way.

My mind jumped back to November 13, 2015, the day Trudeau — our newly elected Prime Minister — released his ministerial mandate letters, making public for the first time in Canadian history each minister’s marching orders for the government’s four year term: use fact-based decision making and be transparent.

After 10 years of Harper’s autocratic anti-democratic rule by fiat, the change in tone and form was palpable; it seemed too good to be true — and it was.

The broken promises and betrayals over the last 18 months have confirmed for me that democracy requires eternal vigilance, that politicians are followers not leaders, and that political promises are too easily broken.

All this flashed through my mind as I spent the rest of the day working with colleagues at West Coast Environmental Law to put together a briefing note on the various tools the soon-to-be B.C. government can use to stop Kinder Morgan. Then I went home and turned on CBC’s The National and I started fuming.

The first sound bite was Justin Trudeau in Rome regurgitating his hackneyed talking point of “facts and evidence” This time, he was saying the facts and evidence on Kinder Morgan hadn’t changed despite the change in government, signalling his continued support and intention to push through the pipeline over any British Columbia objections.

Frankly, I almost retched at Trudeau’s hypocrisy. It’s hard to stomach his epic flip-flop on the inadequacy of the NEB’s Kinder Morgan review. The only explanation for his transformation from a hard critic to a cheerleader is political opportunism. There is no other way to reconcile candidate Trudeau’s infamous August 2015 videotaped exchange with my colleague Kai Nagata with his current pipeline stance. The video made clear the future Prime Minister promised the National Energy Board’s (NEB) review of Kinder Morgan would be redone.

“Justin Trudeau and the Liberal Party of Canada have serious concerns with the process surrounding the approval of this pipeline. We cannot support the pipeline in its current form because the Conservatives have not ensured environmental, community or stakeholder consent.”

And here comes the kicker:

“We agree with what you, and Canadians across the country, have been saying for a long time: Canada’s environmental assessment process is broken.”

Yet, somehow the “broken”, unsupportable process miraculously repaired itself as Trudeau mounted the steps at 24 Sussex Drive.

The National also had Jim Carr, the Minister of Natural Resources, defending the Kinder Morgan review as the “the most exhaustive in the history of pipelines in Canada.” Candidate Trudeau’s own words and his party’s letter mock Minister Carr’s claim.

In reality, the NEB’s review of Kinder Morgan was about as fair and rigorous as a Trump national security vetting, without the tweets. I guess there is something about Ottawa that makes politicians like Harper and Trudeau think they can transform black into white just because they say so.

As for Trudeau’s promised “redo”? Although deeply flawed itself, Jim Carr’s slap dash “supplemental ministerial review” identified many important issues overlooked in the NEB process. The panel acknowledged they “hadn’t the time, technical expertise or the resources to fill those gaps.” Concluding, “[o]ur role was not to propose solutions, but to identify important questions that, in the circumstances, remain unanswered (emphasis added).”

Despite this, Trudeau went ahead and approved Kinder Morgan without addressing any of the six unanswered questions raised by the panel.

The notorious Frank Underwood from House of Cards would be proud of Justin and Jim, but British Columbians are pissed.

Many Liberal MPs from B.C. tried to warn the PMO about the inevitable backlash, but they have their own agenda and are ignorant of how B.C. ticks. Just like Harper’s fatal mistake of pushing Enbridge, the PMO seems to be banking on the issue dying before 2019. The Green-NDP alliance makes that unlikely.

Alberta Premier Rachel Notley’s recent pro-Kinder Morgan proclamations were equally ham fisted. “Mark my words,” she said, “that pipeline will be built, the decisions have been made and it is the best interest of Albertans, Canadians and, in particular, British Columbians.”

Nice try Ms. Notley, but where do you get off thinking you can speak for the best interests of British Columbians? I know you’re working hard to drag your province’s laissez faire energy policies into the twenty-first century, but you’re not going to succeed by linking your political survival to something you have no influence over. How exactly are you going to force the B.C. government to approve the 60+ provincial permits Kinder Morgan still needs for construction? Sorry, but you have no power here.

Let’s get real. British Columbians are tired of eastern politicians and federally appointed bodies trying to to force unwanted projects through our unwilling province. And we won’t sit idly by while Big Oil, Notley, pro-oil publications and, of course, Trudeau’s federal Liberals double down, falsely claiming Kinder Morgan is in the “national interest.”

Expect a chorus of pundits and politicos, mostly located east of the Rockies, claiming B.C. has no power to stop it. But don’t believe them. In fact, remind them they said the same thing about Enbridge’s Northern Gateway.

When are the arrogant elites in Ottawa going to stop underestimating the power of the No Tanker/anti-Kinder Morgan movement?

Trudeau has grossly underestimated the depth of the Kinder Morgan opposition and the resolve of British Columbians. So mark MY words — Ottawa’s broken promises on electoral reform and a Kinder Morgan redo could prevent him from retaining his majority in 2019. Incumbent federal Liberal MP’s should have a few sleepless nights after looking at this map: 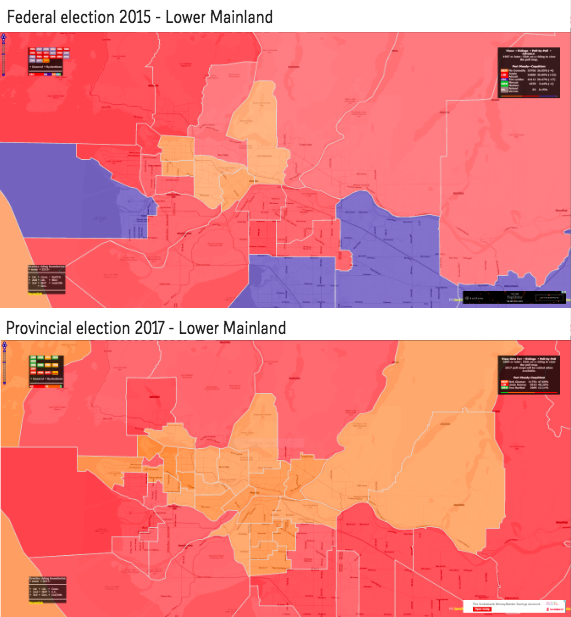 And while politicians are meeting with lobbyists and hosting cash-for-access dinners, Dogwood staff, volunteers, allies, partner groups and First Nations are talking to everyday British Columbians and building our army of resistance ready to fight political interests trying to push our country backward instead of forward.

When Green Party leader Andrew Weaver said “If Rachel Notley thinks there’s nothing B.C. can do to stop Kinder Morgan, I suggest she look at section 35 of the Constitution,” he was absolutely right. And he wasn’t just flipping the bird to Big Oil and Alberta’s arrogant view that what’s good for them is good for all Canadians. He was showing British Columbians that we finally have a government willing to fight for us and not for the interests of Big Money.

Like most people, I too carry the scars of disappointment from a long list of broken political promises. My flashbacks of Trudeau’s betrayals while watching CBC’s Kinder Morgan coverage are almost painful.

Hopefully, this time is different. The ultra thin margin between the parties means that the soon-to-be government can’t risk breaking its promises. One MLA abstaining, one MLA crossing the aisle or going rogue could topple the government or defeat an important bill. This gives us enormous leverage and opens new doors for holding a government to its promises.

It won’t be easy, we’ll face unexpected obstacles, but if we commit to connecting people together, and creating a framework for them to collectively exert power, we can start creating the province we dream about for our kids.

This is the moment we have been preparing for. It’s our time.

We are big, we are strong, we are resilient, we are organized, and every day we grow more powerful.

If Ottawa, Texas or Alberta want to go toe-to-toe once again, I’m raring to go.