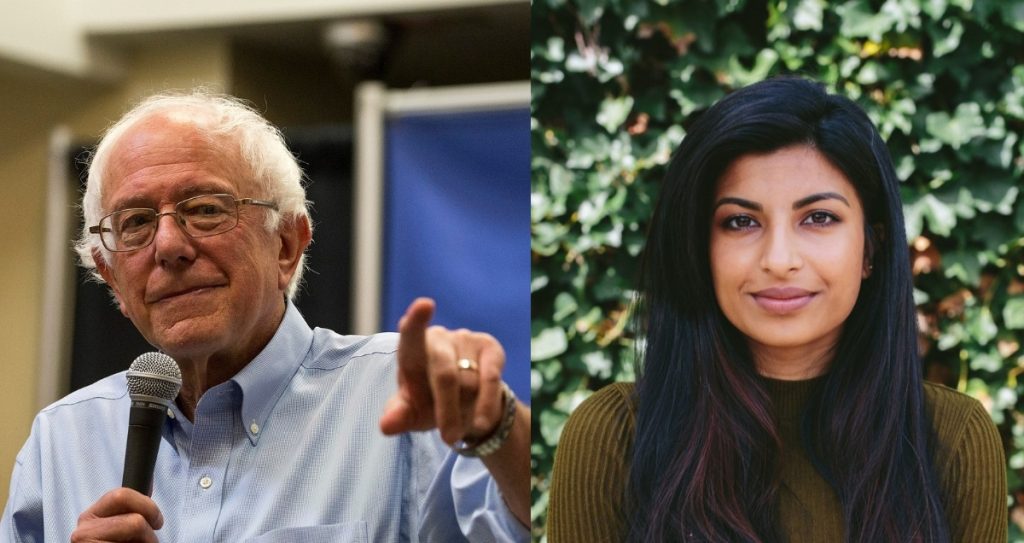 A fearless truth teller takes on corporate power. Can Anjali win the ‘primary’?

Anjali Appadurai has many skills and attributes that Bernie Sanders does not. But her laser focus on corporate greed should be familiar to anyone inspired by the Vermont senator’s presidential runs. And like Bernie, Anjali has a path to win the leadership of her party – which is why the establishment will try to stop her.

In fact, the musician and climate organizer could be premier before Christmas, with two years to govern before the next general election. I’m sure that worries oil and gas CEOs, and the senior bureaucrats and party mandarins who have enabled their takeover of B.C. But for those who believe in public control of our government, it’s an extraordinary opportunity.

Voters who want to choose B.C.’s next premier have just a few days left to sign up as BC NDP members before the deadline of September 4. Like primary voters in the U.S., they will play an outsized role in deciding who holds power – and how the province responds to the climate emergency, housing crisis, pandemic, inflation, poisoned drugs and more.

A battle for control of the New Democratic Party

Anjali’s insurgent campaign for BC NDP leader is demonstrating how far her party has drifted from its roots in social, environmental and economic justice. Walking the picket line with striking government workers, brandishing slogans like “people and planet first” and “truth, courage, solidarity” Anjali embodies old-school New Democrat values.

The implication is not pretty for opponent David Eby or the 48 MLAs who rushed to endorse him. They’re the political establishment now. And in the five years since they took power, life in B.C. has gotten alarmingly worse.

This week Eby told the Vancouver Sun he was “frustrated” by Anjali’s campaign. He wanted a swift coronation so he could get on with what he’s promised: the status quo. Now he will have to defend his government’s record in an actual debate. (Eby later said “sorry” for his impatience in a Twitter post.)

The backroom power brokers in the U.S. Democratic Party pulled every string they could to stop Bernie Sanders – twice. Will B.C’s. New Democratic leadership try to derail Anjali’s grassroots campaign? I wouldn’t be surprised. That’s why she’ll need as strong a movement as possible behind her.

I don’t trust most NDP politicians as far as I can throw them. Sure, they’re nice and friendly on the campaign trail. But once elected, they roll over and show their belly to whoever holds real power – including the party brass who control their careers. That’s why I’ve never joined the NDP or given them a dime – until now.

Yes, it stung to give John Horgan’s party $10. I will never forgive this government for prolonging the drug poisoning massacre. Giving away billions to fracking companies. Launching three militarized raids on Wet’suwet’en and Gitxsan territory. Shrugging off the deadliest climate disaster in Canadian history. The list goes on.

But a political party is the sum total of the people in it. And I no longer think it’s viable to let our ruling party be run by sycophants and corporate lobbyists. Naming the problems is easy. Boycotting flawed institutions can be very satisfying. Fighting to change their direction is much harder – but I think that’s what the moment demands.

Anjali’s campaign is a long shot, a buzzer beater. If she wins, she will arrive in the premier’s office at the head of a movement, but with zero elected experience. That can be a good thing. We’ve let government be run by professional politicians for generations. It’s not working for most of us.

The world would be a different place if Sanders had faced off against Donald Trump in 2016, instead of Hillary Clinton. Like Trump, Sanders understood the anger caused by greedy bankers, corrupt politicians and peoples’ steadily eroding living conditions.

But Sanders told voters the truth about why these things were happening. And he paired it with a positive vision of economic transformation in the face of climate change and other crises of capitalism.

Instead the Democratic Party chose Hillary Clinton, the personification of the political elites responsible for so much misery in America. Despite all her qualifications, Clinton lost – and David Eby could lose the next election too, depending how bad things get between now and then

The solution to low voter turnout, distrust, polarization and malaise is not more of the same. It’s not cautious centrism or incremental change. It’s all-hands-on-deck mobilization to defend the places and people we love, take back our democracy and get ready for the many disasters looming over our communities.

The BC NDP leadership race is one skirmish in a much longer struggle. But the outcome will set the course for the next two years, and shape our future far beyond that. If you’re ready to choose who takes power at this critical moment, sign up before September 4. Then join one of our volunteer calling shifts to sign up more members!