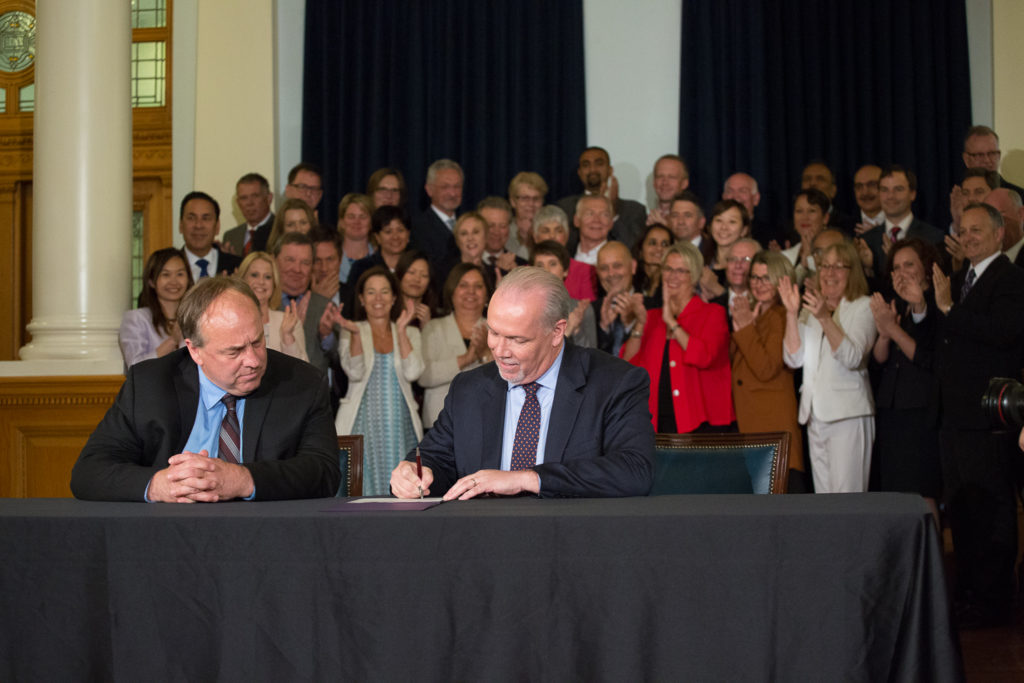 Answer: yes. It’s a time to be hopeful — but not to let up the pressure.

The incoming BC NDP government will be appointing their cabinet next week and can finally get to work on the ambitious promises they made in their historic agreement with the BC Greens.

Of particular interest, and much debate, is their promise on a certain Texas tanker proposal to:

“Immediately employ every tool available to the new government to stop the expansion of the Kinder Morgan pipeline, the seven-fold increase in tanker traffic on our coast, and the transportation of raw bitumen through our province.”

So, what can a new B.C. government actually do to stop this project?

The Province has not only the power but the legal responsibility to:

Christy Clark’s BC Liberal government screwed up on both counts. John Horgan’s Green-backed NDP government has the opportunity to set things right.

In January, Clark’s BC Liberals approved Kinder Morgan after taking more than $771,000 from the project’s oil patch backers. But there were more problems with this approval than shady donations.

First, Clark’s government didn’t put the project through a rigorous provincial environmental review. The failings of the federal process were well-documented. Then, rather than picking up the slack, B.C. practically copy-and-pasted the Harper-era National Energy Board analysis before handing over a B.C. Environmental Assessment Certificate to the BC Liberals’ oil industry donors.

Next, they failed to uphold Clark’s famous five conditions. “Legal requirements regarding Aboriginal and treaty rights are met”? Nope. The ongoing court cases are proof.

Yet still, the approval was issued. Clark’s “caretaker” cabinet could even have been signing off on provincial pipeline permits during the past couple of months. And now Kinder Morgan has filed their proposed construction schedule, revving up to bring the bulldozers into B.C. this September.

It all puts Horgan’s new government in a tough spot. Fortunately, there are some wicked smart folks on the No Tankers team already mapping out a plan for him.

First, the B.C. government can take a look at the Squamish Nation’s provincial court case. Though most Indigenous legal challenges are against the federal government’s Kinder Morgan approval, Squamish stepped up to challenge B.C. too.

As soon as B.C.’s new Attorney General sits down at their desk, they could start putting into practice the new government’s commitment to the U.N. Declaration on the Rights of Indigenous Peoples. If Squamish and British Columbia agree that the provincial consultation was inadequate, the courts could act quickly to resolve the case — potentially cancelling the provincial Environmental Assessment Certificate and prevent any further provincial permitting.

Second, cabinet can issue an order under the Environment and Land Use Act adding new conditions for Kinder Morgan’s project, such as Free Prior and Informed Consent. This order could cancel existing provincial permits and stop future permitting unless the new conditions are met. It’s an immediate tool that could stop construction from proceeding this fall.

Third — once ongoing provincial permitting has been halted — the new B.C. government can put Kinder Morgan through the credible review process we were originally denied under the federal and initial provincial approvals.

To be clear, I am not suggesting a new B.C. Environmental Assessment under the existing process. The NDP-Green Confidence and Supply Motion commits to “revitalize” and “address failures” in this very process. Kinder Morgan’s pipeline and tanker proposal should receive a credible B.C. review of health, safety, drinking water and more — not another rushed, flawed assessment.

At this point, the chorus will pipe in… “but Ottawa already made the decision on Kinder Morgan!”

It’s true, interprovincial pipelines are an area of overlapping jurisdiction. Justin Trudeau could try to claim supremacy and force this pipeline through unceded First Nations territory and the province of British Columbia without consent.

But in doing so, he would certainly be saying goodbye for good to “sunny ways” — not to mention a new “nation-to-nation relationship with Indigenous Peoples.” We all saw how that turned out for previous pipeline-pushing Prime Ministers.

The good folks at West Coast Environmental Law put it best, so I’ll leave the last word to them:

“The potential of a future legal challenge, which may not occur, should not discourage B.C. from taking principled steps to safeguard matters squarely within provincial jurisdiction…

“It’s time for B.C. to hit the ‘pause’ button on Kinder Morgan, uphold its obligations to Indigenous peoples, and properly assess the project’s impacts – before it’s too late.”