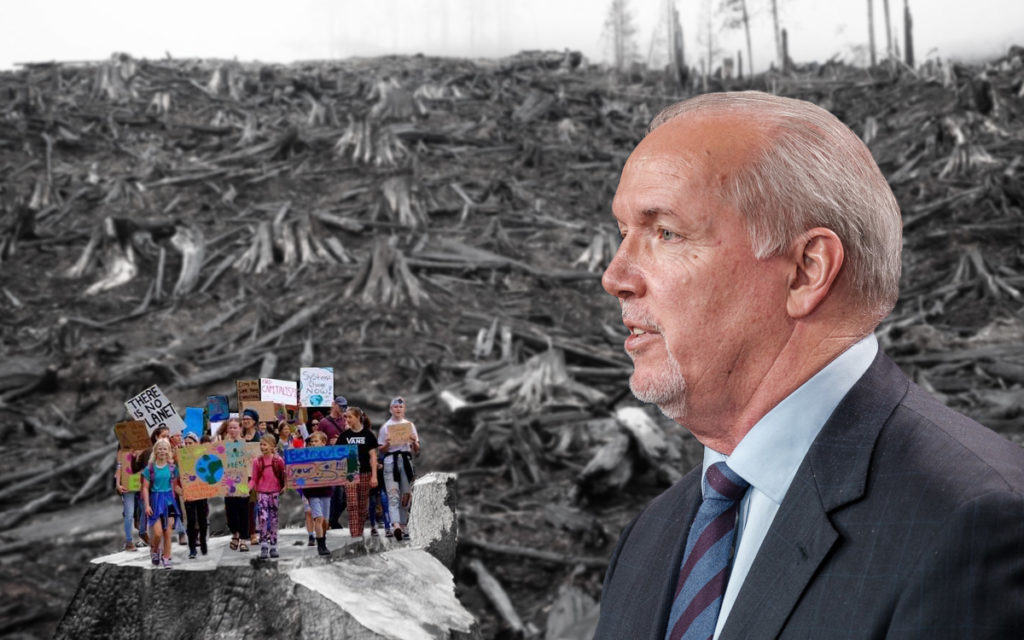 BC NDP leadership race will pick a premier for troubled times

John Horgan is leaving before things get really bad. Will the next leader be able to turn the ship around?

John Horgan certainly left his mark on the lands known as British Columbia.

The Site C dam, which is permanently erasing more than 10,000 years of human history and culture in the Peace River Valley, will be his most expensive monument.

But there’s also the Coastal GasLink pipeline, endless fracking pads and tailings ponds, giant clearcuts, and mine and highway expansions. Horgan’s legacy is visible from space.

The upside of all this destruction was supposed to be a better life for British Columbians. Healthcare, education, affordable housing. But that deal has fallen apart.

Life in B.C. is shorter, and more expensive and stressful than it was five years ago. And the climate crisis looms over everything, making the future deeply uncertain.

Will the next premier have what it takes to rally people, and use the power of government to make our communities stronger and more secure?

Or will they pander to global corporations looking to squeeze the last drops of profit out of our province? BC NDP members will make that choice for us soon.

A province on the brink

Horgan is leaving before the pitchforks and torches come out, but all signs point to trouble for whoever replaces him.

B.C. has the lowest life satisfaction score of any province, according to Statistics Canada. The obvious culprit is the skyrocketing cost of shelter, energy and food.

We are also weighed down by widespread illness and grief, and a crumbling medical system too neglected to treat us. In 2021 more people died in B.C. than babies were born – the first time since record keeping began.

The poisoned drug supply has killed nearly 10,000 of our family members and friends since the province declared it a public health emergency. Another 3,722 have died of Covid-19, with thousands more left sick and disabled.

Last year 619 people died in the heat dome, plus wildfires, landslides and floods. Under Horgan, life expectancy in B.C. reached its peak and started to decline.

Not all of these problems originated in B.C. or with Horgan himself. But it’s our government’s job to shield the people who live here from larger forces throwing our lives into chaos.

Without a shift in strategy, the slide in living conditions will make it harder to rally people around collective projects for the common good – like fighting climate change.

A party afraid of its grassroots

A leadership race is a party’s best chance to sign up new members and bring fresh energy into the political debate.

After the NDP lost the next election, Dix stepped down and Horgan was appointed leader because nobody else wanted the job. The party has bled members ever since.

That seems to be okay with the people running the BC NDP. They see it as a machine for winning power rather than a forum to debate new ideas.

Unless exciting candidates step forward who can inspire more people to engage in our democracy, B.C.’s next premier will be chosen by a handful of party loyalists.

A chance for renewal

The party could opt for the shortest possible leadership race, to ensure that a current member of Horgan’s cabinet is crowned this fall.

That would set up a smooth transition of power long before the next election, with Horgan’s inner circle staying to whip the new face of the party into shape.

But that would be a mistake.

It’s obvious the status quo isn’t working for most people in B.C. The team of old-school politicos around Horgan should follow his lead and make space for new blood.

The province, and the governing party, would be better served by an open, democratic leadership race that could truly find the best person for the job of premier.

It would test that person’s mettle before facing an election, and flex the organizing muscles of the social movements that make up the NDP.

Most importantly, it would use the calm before the storm to bring forward new ideas for how to get through the next five years, and the decades after that.

We’ll know soon what kind of leadership race the BC NDP plans to hold – and what kind of political party they want to be.