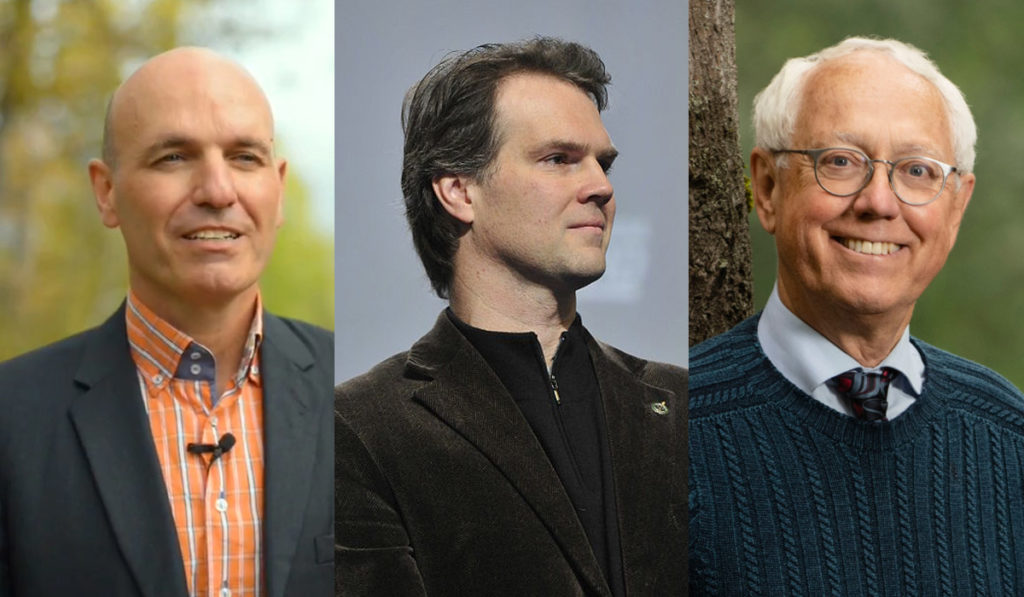 Murray Rankin is on his feet, hands outstretched, his voice rising with frustration. It’s February 2019, and the MP for Victoria is grilling the federal Liberals for giving billions of dollars to oil and gas companies in the middle of a climate emergency.

Nathan Cullen, Fin Donnelly and other New Democrats bang their desks and clap as Rankin reaches a thundering crescendo: “When will the Prime Minister stop giving fossil fuel subsidies to giant corporations and get serious about climate change?”

It’s a question the former MPs could ask their new leader, John Horgan. All three are now running for the BC NDP. But since defeating former Premier Christy Clark, Horgan has increased oil and gas subsidies by 79 per cent.

B.C. taxpayers now give a billion dollars a year to oil and gas companies, in return for less than $200 million in royalties. The province’s budget for fracking and pipeline expansion is double what we spend on climate action.

What about jobs? Drive past the man camps and motels along the Trans Mountain and Coastal GasLink pipeline routes. Most of the trucks have Alberta licence plates. Only 8,300 British Columbians work in oil & gas. But we give their bosses a billion dollars a year – over $120,000 per worker.

In other words, we could pay oil patch salaries to B.C. workers to build the infrastructure our communities need to survive the climate crisis. We could pay people to go back to school, retrain or transition into any job they like. Instead, the government gives it to foreign corporations like Encana and Petronas.

BC NDP candidates in their own words

This government’s record over the last three years is at odds with many of the candidates now hoping to win seats as NDP MLAs.

Fin Donnelly, BC NDP candidate in Coquitlam-Burke Mountain, fought corporate welfare for oil and gas for years. As an MP he voted against Stephen Harper’s 2014 budget in part because it contained “subsidies to highly profitable oil and gas companies.” As Donnelly said at the time, “It’s about priorities.”

Former MP Nathan Cullen is running for the BC NDP in Stikine. Last year he roasted the Trudeau government for “dumping” billions of taxpayer dollars on the Trans Mountain pipeline and breaking their promise to end fossil fuel subsidies. “Will the Liberals stop throwing good money after bad and finally start investing in the green economy?” he asked.

Niki Sharma jumped back into politics after a stint at Stand.earth, a climate organization that released a report revealing the eye-popping scale of B.C.’s oil and gas subsidies. She won the NDP nomination in Vancouver-Hastings, calling for the province to “move away from fossil fuel expansion [and] phase out subsidies to the industry.”

I hope some of them find the courage during this election to say out loud what they’ve said in the past.

The BC NDP platform, released Tuesday, contains one line about fossil fuel subsidies: “We will conduct a comprehensive review of oil and natural gas royalty credits.” But prior to winning power in 2017, the party’s MLAs didn’t need a review to know that giving public money to oil and gas companies is wrong.

As George Heyman said, “We are creating significant environmental catastrophe, significant health issues and we are going to cost the economy of this province, this nation and the world billions of unnecessary dollars.”

David Eby slammed the BC Liberal “giveaway” to oil and gas companies in 2015: “We should not accept this deal that effectively obliges all B.C. taxpayers to underwrite those companies’ risks, as it also pads their profits.”

But once in government the BC NDP sweetened the pot, offering an unprecedented $5.3 billion in subsidies to the international fracking consortium known as LNG Canada. The NDP’s about-face prompted a rare public celebration from former premier Christy Clark.

“They could have changed the climate plan, or had a moratorium on fracking, there were a 100 different things they could have done to stop it, and they didn’t,” Clark said. She also credited John Horgan for pushing ahead with the Site C dam, which is arguably another multi-billion dollar sop to the fracking industry.

A caucus of the brave?

Yet it doesn’t appear once in the BC NDP’s 11-page election messaging guide, leaked by the Breaker. That means some candidates are simply going to have to go off-script.

I suspect there are many BC NDP candidates and MLAs that see their party’s growing subsidies to oil and gas companies as a liability. Not just politically, but to the province’s plan to stop rising greenhouse emissions – and our collective battle for a safe climate future. Now is the time for them to speak up.

ASK YOUR B.C. ELECTION CANDIDATES:
WILL THEY CANCEL OIL AND GAS SUBSIDIES?