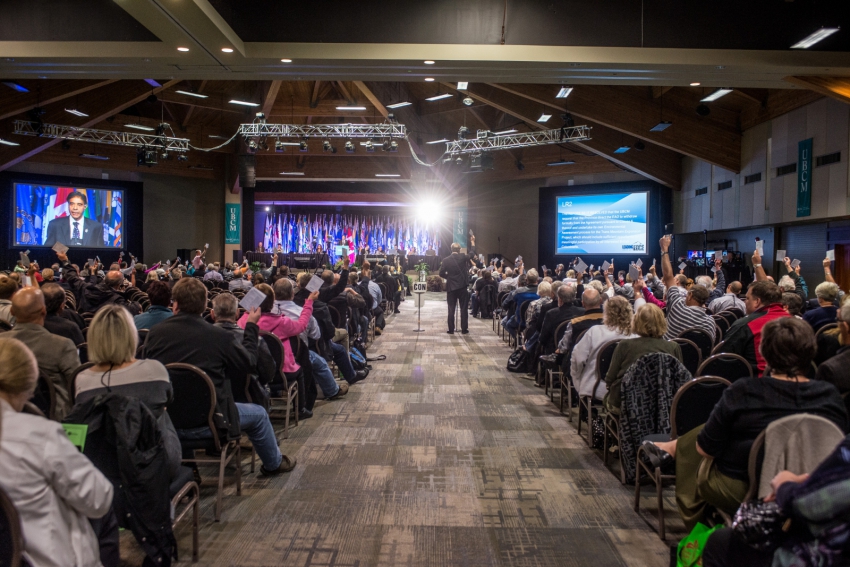 With rain lashing the chairlifts and green grass stretching up the mountainside, the visitors packing Whistler’s chalet lounges this week aren’t here for the moguls. It’s the annual Union of B.C. Municipalities convention, and that means 737 mayors and councillors are here to schmooze, scheme, and vote on a series of contentious resolutions.

Mayor Derek Corrigan strides into the conference centre in a leather bomber jacket, ready to do battle for his City of Burnaby. Locked in a David-and-Goliath struggle with Texas pipeline giant Kinder Morgan, Corrigan is looking for delegates to support his call for a beefed-up project review.

Burnaby’s emergency resolution was triggered by the National Energy Board’s decision to remove oral cross-examination and public hearings from its study of Kinder Morgan’s Trans Mountain Expansion proposal. Corrigan and others along the pipeline and tanker route want basic due process restored.

Over a plate of ravioli, Mayor Gregor Robertson of Vancouver pitches another resolution to a young councillor from Dawson Creek. Bitumen sinks in water, or so we saw in Michigan’s Kalamazoo River – where Enbridge spilled more than 800,000 gallons when a pipeline ruptured in 2010.

With similar heavy blends already moving through Kinder Morgan’s existing line, Vancouver is asking the province to come up with a plan to clean up oil that doesn’t float.

The City of Victoria’s resolution is perhaps the most radical, but it also acknowledges a basic truth: people in British Columbia have lost confidence in the NEB’s ability to conduct a fair study. Mayor Dean Fortin is asking the province to pull out of the equivalency agreement it signed surrendering its powers of review to Ottawa.

That would mean setting up a parallel, independent B.C. assessment – an untested but interesting idea.

Back in February, pollster Barb Justason asked B.C. residents whether they “basically trust or distrust the Joint Review Panel process”. Only 32% chose “trust”. That was before the federal cabinet approved Enbridge’s Northern Gateway proposal, then whittled down the review process for Kinder Morgan.

This presents a looming problem for resource companies. When a democratic majority of people feel the game is rigged, the merits of a particular proposal are beside the point. Local governments – whether it’s their jurisdiction or not – are expected to deal with constituents’ concerns. But if municipal officials can’t get answers to those questions from the proponent (and several here say they’ve had trouble with Kinder Morgan) what reassurance can they offer citizens?

Mayors and councillors in B.C. are signalling they’re no longer willing to leave things up to Ottawa. They have too much at stake – property values, emergency services, tourism and yes, the health of their residents – to defer to the NEB.

In taking a stand, the mayors invite the accusation they are ultra vires: stepping beyond their powers. Pipelines are federal business, goes the argument – especially if they go through your back yard. Try explaining that at a town hall meeting.

It’s no surprise that mayors are stepping into this leadership vacuum. With municipal elections in B.C. scheduled for November, voters are glad to see elected officials say out loud what the majority of people in this province already think.

Perhaps the federal government thought it was doing exporters a favour when it removed certain barriers to project approval. Instead, proponents find themselves face to face with citizens angry at being excluded from decisions they might have to live with for decades.

It doesn’t matter how many glossy pamphlets a pipeline company prints – that won’t restore faith in the regulator. It’s not the proponent’s job to create a fair playing field, nor is it within their power.

However the UBCM votes on the Kinder Morgan resolutions in Whistler on Friday, the message to higher levels of government is clear: fix this crisis of public confidence in project reviews, or voters are going to start looking for someone to blame. It won’t be the mayors.