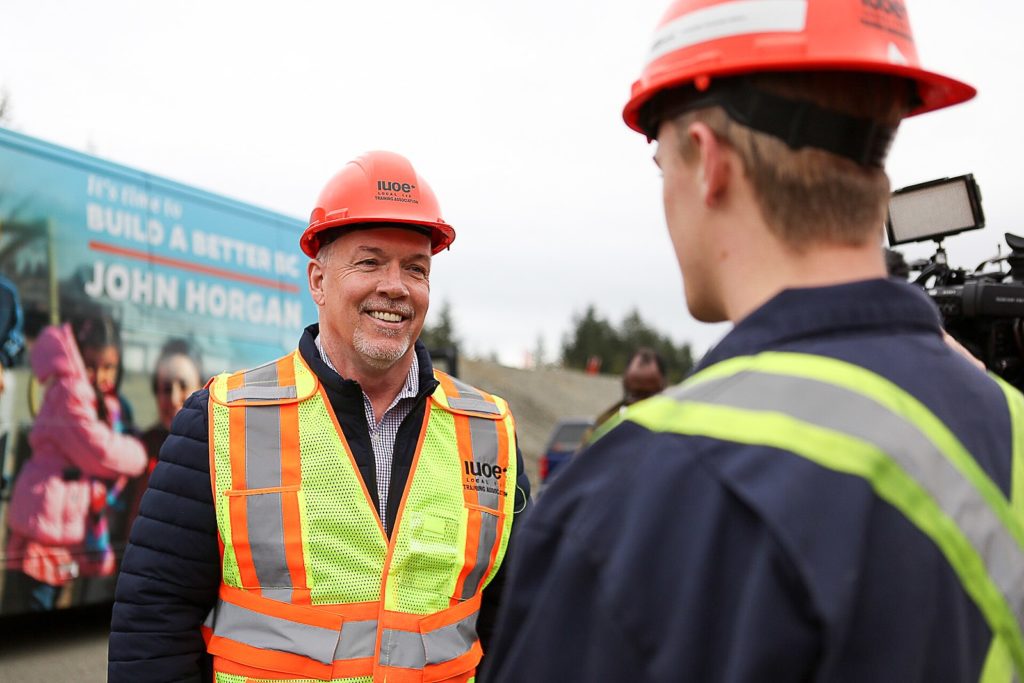 Old-school politics won’t save us from climate chaos. Here’s what might.

Odds favour a B.C. election in 2020. How can we force cooperation on the defining issue of our lives?

Here’s a prediction for 2020: British Columbians will head back to the polls. The NDP promised to make life more affordable, and now they’ve cut bridge tolls, daycare costs and MSP premiums. Premier Horgan still enjoys high personal approval ratings. His team would rather try for a majority soon, rather than wait for the economy to sour or a major scandal to break.

But there’s one constituency feeling increasingly frustrated with Horgan and the NDP: environmental voters. This government has poured billions of public dollars into the Site C megadam, subsidies for fracking and LNG. They’ve all but thrown in the towel on Trans Mountain. If heavily-armed police charge onto Wet’suwet’en territory again, many Indigenous and progressive voters will abandon the BC NDP for good.

The Greens are well-positioned to scoop up many of these votes. But under our First Past the Post electoral system, that doesn’t necessarily mean more Green seats. Instead, it could simply mean the NDP and Greens fight over the same voters, while the BC Liberals cruise to victory.

We don’t have time for four more years of right-wing corporate rule. But we also can’t let the NDP get away with a half-hearted approach to our rapidly accelerating climate crisis. The alternative is to hack the system we have, using the existing rules to elect climate champions – and force them to cooperate across party lines.

With a leadership race coming up, local nomination contests and then another election in B.C., there are opportunities for organized local voters to play an outsized role in shaping the future of our province. We don’t have to participate in all of these battles. Dogwood’s 2020 plan is still in development. But here’s what I see on the horizon.

Step one: the next Green leader

Whoever wins the BC Green Party leadership race this spring will step into a pivotal role. The Green leader is responsible for the Confidence and Supply Agreement with the minority NDP – until the government falls, at which point they’ll be campaigning opposite Horgan.

The Greens would do well to pick someone who connects with young people and understands the transformative political potential of youth movements, like the #Vote16BC campaign and the youth climate strikes.

They also need a platform that resonates with rural British Columbians who are worried about natural disasters and job losses in their communities. That means pitting a vision for a resilient local economy against the “one more boom” mentality of the BC Liberals.

But more than anything, the party needs a strategic leader who understands that growing the Green Party’s seat count and political clout may require a tactical retreat. That would mean not running candidates in certain ridings – even if the NDP at first refuses to reciprocate.

The problem is that our election system is really designed for two-party races. Add a strong third party and you often get results like in the riding of Coquitlam – Burke Mountain. There the NDP incumbent, Jodie Wickens, secured 10,301 votes in the last election. But she lost to Joan Isaacs of the BC Liberals, who got 10,388 votes. The Green candidate finished third, with 2,771 votes.

Until now, the Green Party’s approach has been to spread money and volunteer time across dozens of unwinnable races, only to be accused by progressives of “splitting the vote”. While it’s not true that every Green vote would go to the NDP in the absence of a Green candidate, there is considerable overlap between the two parties.

The next Green leader needs to pick a few races where they stand a serious chance of expanding their beachhead, and focus resources on those ridings. As legendary Chinese military strategist Sun Tzu wrote: “He will win who knows when to fight and when not to fight.” He or she.

It’s up to voters in the Green leadership race to pick someone who’s willing to do politics differently. That could be you.

Under the rules of the BC Green leadership race, the party is opening the contest to non-members, including people as young as 16. Voting will be done online in June. So any B.C. resident with an email address, including teenagers, can vote for the next Green leader.

Former Green leader Andrew Weaver has left the party caucus to sit as an independent while he deals with a family health crisis. He told The Province he would consider resigning his seat after the leadership race, triggering a by-election.

If that happens, it’s far from certain a rookie Green could hold onto Weaver’s riding of Oak Bay – Gordon Head. Before Weaver won in 2013, it was a BC Liberal stronghold. Cabinet minister Ida Chong held the seat for 17 years. In this wealthy riding, it’s actually the NDP that could play the spoiler role.

The NDP finished third in Oak Bay – Gordon Head in the last two elections. Whether voters there pick a new MLA in a by-election or the next general election, it doesn’t make much sense for the NDP to expend resources there.

Here’s where the NDP could nominate a candidate who is willing to do the right thing for the climate: drop out if they can’t win. We saw this in Edmonton-Strathcona in the last federal election. The Green candidate stepped aside and endorsed the NDP’s Heather McPherson, who won. Dozens of candidates in the last UK election did the same thing in an effort to slow the Tory juggernaut.

The NDP is unlikely to agree to a formal cooperation agreement. But a third-place NDP candidate in Oak Bay – Gordon Head could decide to withdraw, clearing the way for a two-way race between the Green and the BC Liberal.

Our own Democratic primaries

It still hasn’t sunk in for most of our political class that we’re in a crisis. Doing things the old way is not only a waste of time and resources, it’s actively pushing us closer to the brink.

We need candidates from outside the political establishment who are willing to carry the voices of the less powerful into debates, campaigns and ultimately the legislature. But to win, they need grassroots supporters and volunteers who also come from outside the traditional party structure.

Alexandria Ocasio-Cortez used this outsider strategy to defeat powerful Democrat incumbent Joe Crowley in a local primary in New York. Bernie Sanders is pulling ahead in the Democratic presidential primary thanks to millions of volunteers and donors who would never support an establishment Democrat. We don’t have the same tradition of primaries in Canada – but we do have local nomination races.

There are legitimate ideological differences between the NDP and Greens. There are good reasons why they are different parties, and a merger is likely a pipe dream. But what they share are supporters: millions of British Columbians who would be willing to vote for either party, especially if it were the only one on the ballot in their riding.

The Oak Bay strategy could work all over B.C., if enough of those big-picture voters chose to get involved in political parties. In most ridings in B.C. candidates are chosen by a few dozen people at a nomination meeting. Changing the outcome could be a matter of signing up a handful of motivated, strategic party members who are ready to cooperate for the climate.

In a multi-party system, the healthiest outcome for democracy is a minority legislature with representation from multiple parties. That includes the BC Greens (and I would argue the BC Conservatives, who provide a safety valve for right-wing voters disgusted by the corruption and greed of the BC Liberal party establishment).

Minority legislatures are more accountable to voters, and more resilient to takeover by unelected power centres like the oil lobby or real estate industry. A minority scenario also offers the greatest opportunity for citizens to push through transformative legislation.

For example, B.C.’s new law banning corporate and union donations, which was part of the Confidence and Supply Agreement between the NDP and Greens. Or the BC Declaration on the Rights of Indigenous Peoples Act (which is still a positive step even if the government thinks it can continue with business as usual).

As climate heating accelerates, we need even more ambitious changes so B.C. can ride out the horrors to come. That means massive, job-creating projects building affordable housing, transit, flood and fire defences, and emergency preparedness. We need to invest in resilient, local, renewable power generation all over the province – not more fossil fuel infrastructure. And that requires leaders who are ready to cooperate in the face of extraordinary odds.

That’s why it’s so important to set up the chess pieces ahead of time, to increase the odds of an NDP-Green government with those strong progressive voices in prominent roles. There’s work to do in both parties to get them to that point.

I’m curious to know what you think. Do you think the NDP and Greens can – or should – be convinced to cooperate? Are you turned off electoral politics completely, or do you see an opportunity to try something new? Please share your thoughts in the comments below.

28 Responses to “Old-school politics won’t save us from climate chaos. Here’s what might.”