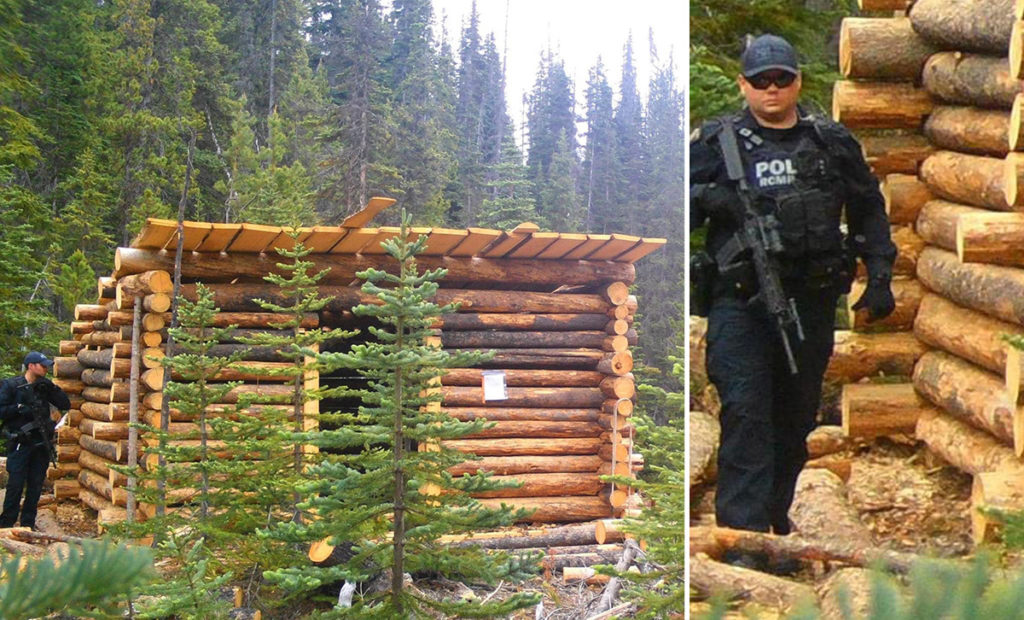 Wet’suwet’en families have dried and smoked salmon from the Wedzin Kwa, or Morice River, every summer for millennia. As the leader of Cas Yikh, the Grizzly House, Chief Woos has a responsibility to ensure food security for his extended family. That’s why he built a large wooden smokehouse on the bank of the river, ahead of the fishing and hunting season.

TC Energy, the company building the Coastal Gaslink pipeline, does not have permits to work in the area. But last month employees walked in to the site and posted an eviction notice on Chief Woos’ smokehouse. They were escorted by a team of RCMP officers, at least two of them carrying Colt C8 carbines – a variant of the AR-15 rifle used by Canadian soldiers and now, police.

Coastal Gaslink is part of the sprawling, foreign-owned fracking complex known as LNG Canada. The carbon-belching project was made possible by $5.35 billion in subsidies from B.C. taxpayers. It’s supported by both the BC NDP and the BC Liberals. But money and politicians aren’t enough to get it built. They also need the threat of state violence.

Back in January it was Woos and the other Wet’suwet’en hereditary chiefs who evicted Coastal Gaslink from their unceded territory. The company responded by calling in the cops, who mounted a multi-million dollar militarized raid against unarmed Wet’suwet’en clan members and land defenders.

Police detained journalists and pointed sniper rifles at peaceful observers. They crashed a police drone into a police helicopter, costing taxpayers nearly $200,000. They took down red dresses hung at the Unist’ot’en Healing Centre in honour of missing and murdered Indigenous women and girls. And they arrested 28 people, all of whom had their charges dropped.

The raid triggered weeks of blockades in solidarity with the Wet’suwet’en chiefs, that became known as #ShutDownCanada. Thousands of people, led by Indigenous youth, encircled the B.C. legislature and every ministry office in Victoria. Unionized port workers refused to cross blockade lines. Gitxsan, Mohawk, and other people blocked trains all over the country, prompting a full-blown political crisis in Ottawa.

The Wet’suwet’en clans are still not backing down. It appears the RCMP are getting ready to force the pipeline through at gunpoint. If they try, it could make #ShutDownCanada look like a walk in the park. Distributed, spontaneous solidarity actions could disrupt B.C. politics and extractive industries for months or years to come.

Not the only flashpoint

At the exact same time, the federal government is hoping to push through another major pipeline and oil tanker project: the Trans Mountain Expansion. The Indigenous territories it would cross are different, but the fundamental questions over who owns the land – and who decides what happens there – are the same.

Like Coastal Gaslink, Trans Mountain would be completely uneconomic without the financial backing of Canadian taxpayers – who stand to lose billions on a stranded asset. It’s a massive subsidy to expand the oil industry at a time when climate science tells us we need to be moving in the opposite direction, and private investors are responding by pulling out of the oil sands. And like CGL, it seems unlikely that TMX will move forward without militarized police.

Those police would be provided by the RCMP, who serve as B.C.’s provincial police force and report to the Public Safety Minister. The B.C. government can request additional equipment from Ottawa, as they did during violent raids on Indigenous land defenders at Gustafsen Lake in 1995. But it’s inaccurate to claim that B.C. police enforcing B.C. court injunctions are under the jurisdiction of the federal government.

The B.C. government promised to use “every tool in the toolbox” to stop Trans Mountain. Instead, they could very well be providing the tools to get it built: body armour, batons and pepper spray.

The BC NDP have differentiated themselves from the BC Liberals in many important ways. Banning corporate and union donations in politics. Passing the B.C. Declaration on the Rights of Indigenous Peoples Act. Halting the trophy hunt on grizzly bears. Eliminating regressive health premiums, funding childcare spaces, stopping the bleeding at ICBC. Together with public health doctors, the province has done an admirable job containing the coronavirus.

But when it comes to the land – who owns it, who decides, who benefits – the Horgan government has been unwilling to challenge the big corporations that are used to getting their way.

It’s been six years since Imperial Metals unleashed the biggest tailings pond disaster in Canadian history. The accident happened on Christy Clark’s watch, but it was the NDP government that chose to drop charges against the company. Then they approved a discharge pipe allowing the Mount Polley mine to pump its liquid waste straight into Quesnel Lake.

Big, mature old-growth trees cover less than one per cent of the forested area in B.C. These groves are older than Confederation, taller than our statues or monuments, integral to Indigenous cultures and coastal ecosystems. Yet the NDP government is still auctioning them off to logging companies at the same rate as the BC Liberals.

On energy issues, former Premier Christy Clark’s legacy is alive and well. Her Site C dam, a taxpayer-funded relic of the 20th-century economy, proceeds despite a court challenge from the West Moberly First Nations. The Horgan government has embraced the BC Liberals’ dubious LNG dream, prompting Clark to congratulate them on Facebook: “It’s great news to hear that the NDP has reversed course on LNG.” As for Trans Mountain, Horgan calls it inevitable.

The power of young people

Nothing is inevitable. And if police or government ministers hit the wrong button this summer, they could trigger a chain reaction that grinds both pipelines to a halt and upends B.C. politics. Frustration over climate and Indigenous rights have piled up like kindling. Young people, who feel justifiable despair over the direction our planet is headed, could be the match that lights the flame.

Youth unemployment is somewhere between 25 and 30 per cent in B.C. Teenagers just spent months cooped up and deprived of social interaction. They now face the unappetizing prospect of going to school online in the fall, or trying to find precarious jobs that could evaporate again if there’s a second wave of COVID-19.

In May they were hit with a barrage of horrifying videos of police violence, followed by the Black Lives Matter uprising that spread across the U.S. and Canada. News that those protests spawned exactly zero COVID-19 cases in B.C. will make it harder to keep people apart.

Don’t forget, before the pandemic hit, high school students organized the biggest marches Canada had seen in decades, protesting against government inaction on climate change. They intuitively grasp the connections between racial justice, Indigenous rights and our environmental crisis. And they can mobilize with astonishing speed and scale given the right trigger moment or call to action.

The smart thing to do would be to cancel Coastal Gaslink, Site C and Trans Mountain, and put those billions of public dollars into a COVID-19 recovery plan that gives us some hope of surviving the climate crisis. Unfortunately, our politicians might have to find out the hard way.