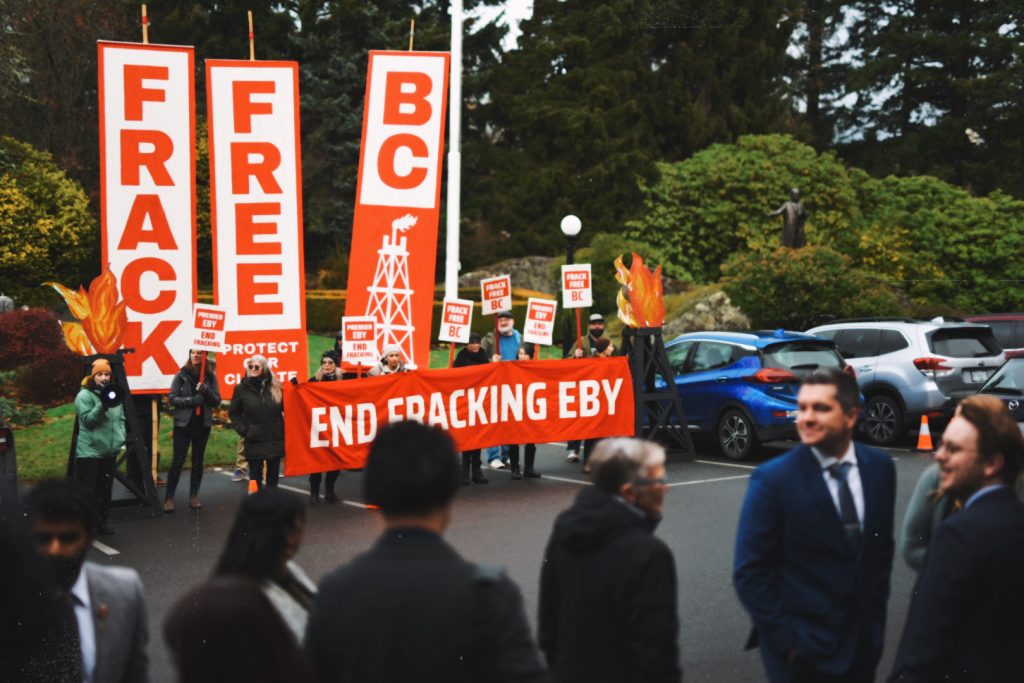 If we hold off new fracking and pipelines, the industry’s power starts to crumble

The relentless power of the oil and gas industry could be seen in one word spoken last week by B.C. Premier David Eby: “endless”. Two months ago Eby said “we cannot continue to expand fossil fuel infrastructure and hit our climate goals.” That’s true. But it set off alarm bells for the lobbyists pushing new fracking and pipelines. So now the premier’s rhetoric has changed.

“We all know that we need to drive down and eliminate carbon pollution and emissions that are related to climate change in our economies,” Eby told the Globe and Mail last week. “And part of that is recognizing that fossil fuel infrastructure and expansion of fossil fuel infrastructure is not consistent with – endless expansion is not consistent with – us hitting those goals.”

Did you catch that? No fossil fuel CEO would admit they want “endless expansion” of the industry. But Enbridge, TC Energy and others do want Eby to support specific projects: the massive Westcoast Connector gas pipeline, Coastal GasLink and a slew of fracked gas export terminals. The word “endless” gives Eby wiggle room to approve them, one at a time.

A tug-of-war with oil lobbyists

None of this will surprise Dogwood supporters. By now we’re used to the rollercoaster: leaders say encouraging things when they’re elected – then backtrack once the lobbyists get to them. Politics in B.C. is a tug-of-war between everyday people trying to survive what’s coming, and ruthless corporations trying to game the system for maximum profit before it all comes crashing down.

Speaking of ruthless corporations, oil and gas profits in Canada are up by $38 billion since before the pandemic. That’s a 1,000 per cent increase, far more than other sectors of the economy. And they are spending plenty of that cash on lobbying, astroturf campaigns and propaganda, all to delay the transition away from fossil fuels.

Dogwood's @awoodsworth and @paigegorsak confront B.C.'s energy minister after his speech at a gas industry conference in Vancouver. If you're a politician out in public claiming that more fracking is a solution to the #climate emergency, this is what to expect. #bcpoli pic.twitter.com/WbQ6wvs7DF

To balance that corporate influence, grassroots organizers have to be more disruptive, urgent and get in the faces of government decision makers. It’s why we hounded the NDP’s former energy minister at a gas industry conference in May – and joined up with allies this month to interrupt the swearing-in ceremony for government ministers.

Ratcheting up the political stakes

It’s also why we organized to put maximum pressure on David Eby and the BC NDP establishment in August. Eby’s opponent Anjali Appadurai swung for the fences with her “New Deal for BC” plan, inspiring thousands of people to join the party to support bold climate action.

Dogwood and allies encouraged new and returning NDP members on our lists to sign up and vote for the next premier. The membership drive was so successful that the party pulled the plug on the leadership race, changing its own rules in secret to have an excuse to disqualify Appadurai.

Again, not a surprising outcome. But it was still worth it to organize. The anger among grassroots members of the BC NDP built up over years of bad decisions by former leader John Horgan. It hasn’t gone away. The new premier, Eby, knows that approving new oil and gas projects could have painful and unpredictable consequences, even within his own party.

You can see the government trying to create safety release valves by handing grassroots advocates partial victories. For example, killing the province’s largest taxpayer subsidy to fracking companies – while finding ways to make sure this doesn’t put a damper on drilling.

Dogwood started campaigning against fossil fuel subsidies in 2018, getting louder on the issue during the 2020 B.C. election. At first, MLAs simply tried to ignore it. When they saw we weren’t going to let up, they switched to denying that the government subsidizes oil and gas. Then in May, the pressure became too much – and we saw a remarkable pivot. Horgan called it “a broken system” as he announced the phaseout of the $1.2 billion-a-year Deep Well Royalty credit.

Buried in that announcement was the creation of a new fossil fuel subsidy. Simply put, the government has promised fracking companies they will pay almost nothing for the gas they extract – until new wells recoup their upfront costs. It’s frustrating, but it shows once again that a large, grassroots organizing movement can shift the political landscape. That’s why Dogwood has teamed up with Stand.earth and Wilderness Committee to launch the Frack Free BC alliance – to build a movement to push even harder for an end to new oil and gas infrastructure.

Dogwood’s willingness to fight in the political arena is what got us in the headlines in 2022. But some of the work our team is most proud of rarely makes the news. Over the years we’ve realized that reducing emissions is not enough to keep our communities safe. We also need to decolonize and democratize the province we live in. That means returning land to Indigenous communities and shifting power to the people who have to live with government decisions.

To imagine a future where the Crown can’t tear apart Indigenous families, or take land by force, we have to unlearn a lot of the things we’ve been taught. So much has been hidden from us about the Indigenous cultures, languages, lands and legal systems Canada is built on top of – and our painful shared history. Dogwood has made that project of learning and unlearning a permanent part of our work, through reading circles and discussion groups, gatherings and solidarity actions.

This year we were happy to help in a small way to put on the Peace and Unity Summit on Wet’suwet’en territory. That (and a series of satellite events) brought together land defenders, leaders and organizers from Indigenous and non-Indigenous communities to share knowledge and strategies. We also began a project with the W̱SÁNEĆ Leadership Council to learn more about W̱SÁNEĆ territories and some of the nation’s priorities.

Inspired by Neighbours United in the Kootenays, we launched a “deep canvassing” pilot to continue the theme of listening to local people and building relationships, rather than charging in with a pre-baked campaign and trying to win their support. We’re taking a similar approach in Surrey, where climate justice conversations include impacts on farmers across the world – and emergency disaster relief right here in B.C.

This is the paradox of the climate emergency: even as things become more dire and our sense of urgency grows, we need to go slow to build the trusting, reciprocal relationships that allow us to respond effectively to crises as they come up.

This is especially difficult when disasters are unfolding in slow motion, like the construction of both the Coastal GasLink and Trans Mountain pipelines. The truth is our movement has yet to become powerful enough to stop both projects at once. We are building that people power, and more opportunities will come as both projects run out of money for construction. But it is painful to see the destruction day after day as our governments push in the wrong direction.

The key to undoing the oil industry’s spell lies in its relentless focus on expansion. In our broken economic system, these companies must either grow or die. For a fossil fuel retailer like Fortis, that means growing their customer base with new homes hooked up to gas. For fossil fuel exporters, that means new fracking wells, pipelines and shipping terminals. That new infrastructure is what keeps the credit flowing, unlocks more profit and allows the industry to consolidate its political power. That’s where we must focus our fight.

This winter will be tough. The industry is using the Russian invasion of Ukraine as a powerful argument for building out more conduits for fossil energy. But European and Asian countries know the future lies in renewables, and are installing electric heat pumps at a breakneck pace. Pretty soon we will hit a tipping point where new energy is cheaper and safer to get from renewable sources – but we have to hold off the desperate push for oil and gas expansion until then.

The good news is B.C. has a massive budget surplus. There’s plenty of money to invest in fossil-free affordable housing and public health care – the things that make us truly secure. And our government has the resources to retrain fossil fuel workers and support their families and communities as we decarbonize the economy. We’ll lay out some ideas in the new year to accelerate this shift. Get a sneak peak at the Frack Free BC organizing kick-off call January 31 – join here if you’re interested.

In the meantime, enjoy a well-deserved rest and time with loved ones. It’s what makes everything else worth it. Happy holidays!