This election is our chance to drive key issues like climate change and voting rights to the top of the political agenda, and elect leaders who will be brave enough to act on their values – even if that means standing up to their own party. It’s time to stop taxpayer-funded climate change in B.C, and give youth a voice in the decisions that will shape their future.

By mail: Elections BC says it is now too late to send any mail-in ballots. Either take your mail ballot to a polling location (or other drop off spot) on any of the days they are open, or destroy it and vote in person instead.

Where do the parties stand?

The B.C. government gives a billion dollars a year to oil and gas companies – twice as much as it spends fighting climate change.

The NDP has a commanding lead in the polls, and the BC Liberals are in disarray. That leaves progressive voters with a rare opportunity to vote for candidates that align with their values, rather than voting “strategically” to try to stop a right-wing majority. If you’re voting with the climate in mind, here’s our report card on where the parties stand: 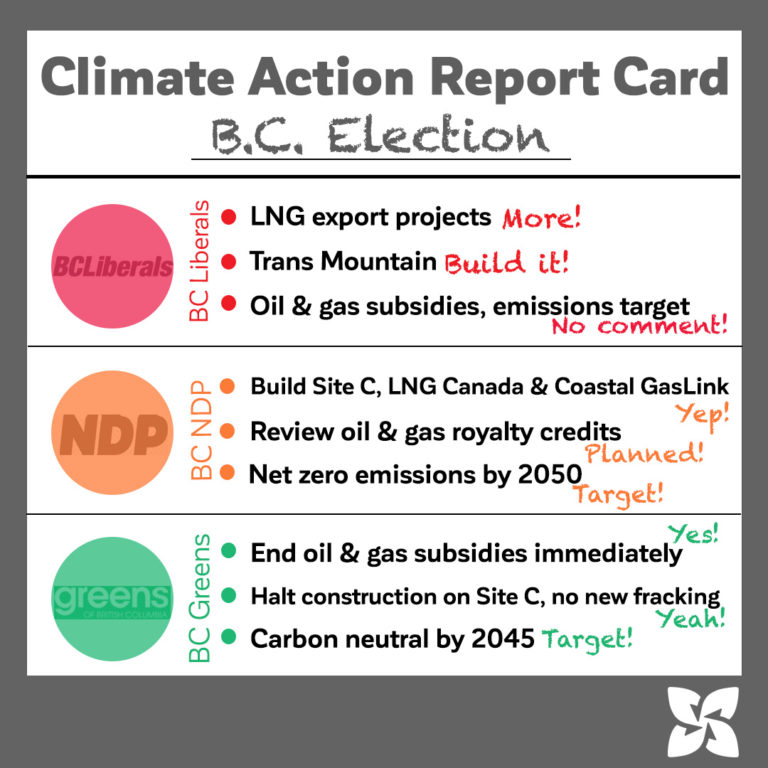 Fore more in-depth coverage of where the parties stand on climate and other environmental issues, check out this article in The Narwhal.

Ask your candidates where they stand on oil and gas subsidies

Email your candidates and ask them to commit to cancelling oil and gas subsidies if they are elected as your MLA – even if that means standing up to their own party. Send your message.

Help get out the vote

Dogwood is getting out the vote and we need all hands on deck. Take action by making phone calls to voters, or by reaching out to people you know who might not cast their ballots. Sign up for Dogwood GOTV.

Help spread the word by sharing Dogwood content (like videos) and tagging candidates, tuning in to online all-candidates’ debates and asking questions in the chat and posting questions and comments on candidates’ social media channels. Sign up to flood candidates with our message online.

Why would a climate voter ever support the NDP?

NDP leader John Horgan was asked why climate voters should support his party. He used the time to promote a taxpayer-funded fracking project.

Where do the parties stand?

The BC Green party has included lowering the voting age in its previous platforms and has introduced a bill in the Legislature several times. A big supporter of youth in politics, they are running three candidates under 25 years old, including Kate O’Connor, who turned 18 during the campaign.

Last year, BC NDP members passed a resolution in support of lowering the voting age at their convention but it has yet to make it into this election’s platform.

In the past, individual BC Liberals MLAs and leadership contenders have put forward the idea, but nothing has been brought forward in this campaign.

Ask your candidates where they stand on lowering the voting age

The next government will be charged with planning B.C.’s way through the pandemic and beyond, tackling issues like the economy, health care, employment, education and climate change. 16 and 17 year olds are impacted every day by government decisions. And just like other citizens, they deserve a say in what lies ahead. Send your message.

16 and 17 year olds aren’t voters in this election. But they can register to vote in the future. Get set up for the future – and show politicians that youth and engaged and eager to participate in democracy. Register to vote.

Help get out the vote

The Vote 16 BC team is getting out the vote and needs your help. Take action by making phone calls to voters in target ridings, or by reaching out to people you know to encourage them to support a candidate that wants to lower the voting age. Sign up for Dogwood GOTV.

Where is the NDP?

“The next four years and beyond”