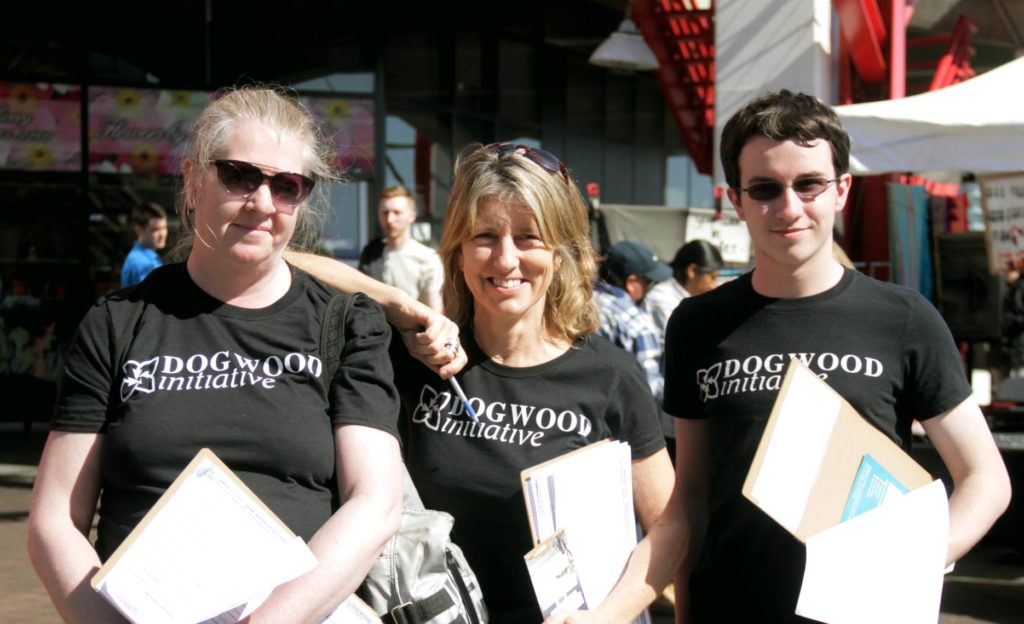 It’s working. Dogwood Initiative and its allies are building what is already the largest nonpartisan political organizing network in British Columbia. We’re conservative and liberal, urban and rural – but we share one thing in common: we’re not going to let the federal government shove unwanted bitumen pipelines through an unwilling province.

With 68 teams on the ground, I’m proud to relay the news that the first six have hit their targets – collecting contact information from 15 per cent of supportive voters in their riding. That’s before the federal government even makes a decision on Enbridge Northern Gateway.

Let’s back up. Two weeks ago, for the first time, a few voters in B.C. got a chance to cast a ballot on the Northern Gateway proposal. The residents of Kitimat had plenty to gain from the project, but they decided the costs were too high. They sent Enbridge’s PR team packing in a surprise David-and-Goliath victory.

That night we launched LetBCvote.ca, with a simple question: what would happen if the rest of us got a chance to vote? The polling suggests that in a province-wide referendum, Enbridge would lose badly. The company has alienated people from the Rockies to the coast. Yet the voters of B.C. have been given no democratic input into this crucial decision.

If the federal and provincial governments approve Enbridge’s proposal in the face of majority opposition by First Nations and B.C. voters, we have an option other provinces don’t have. We could launch a citizens’ initiative and force the B.C. government to withdraw its support. Along the way we would build an electoral army that no federal party would dare cross on this issue ever again.

It’s a clunky process that would require a huge amount of work. But we floated this idea to see if B.C. voters care enough about this issue to get organized, just in case. They practically broke the doors down.

19,230 British Columbians are on deck to support a citizens’ initiative however they are able.

4,488 canvassers so far have volunteered to collect signatures.

1,387 organizers have asked for training in their home communities. We’re scheduling workshops as fast as we can.

68 teams are already out on doorsteps in ridings across the province.

And six have already hit their targets, gathering contact info from at least 15 per cent of supportive voters in their home riding. (The Elections BC threshold for success in an initiative is 10 per cent, but better to play it safe.)

Another six ridings are getting close. Organizers in Vancouver-False Creek, Vancouver-Fairview, Powell River-Sunshine Coast, Oak Bay-Gordon Head, Esquimalt-Royal Roads and North Coast are all more than three-quarters of the way to their goal (meaning they’re actually over the 10 per cent threshold).

Now, a reality check. That’s 12 ridings out of 85. There’s a huge amount of work left to do to get ready. But this is what’s called proof of concept. The ground game is growing fast. The pledge signatures are rolling in. The software is humming along. And yeah, we’re having fun.

I’d venture that we’re getting a glimpse into the future of B.C. politics. That is, groups of friends and neighbours organizing not around a party or an ideology, but an issue that cuts right to the heart of who we are as a province. It means First Nations and B.C. voters finding common ground. It means reaching out to unlikely allies and working together, in defense of our shared home.

The democratic muscles that these teams are working right now – on doorsteps and phones in Kelowna and Cranbrook and Surrey and Prince George – will be essential if we’re forced to consider a citizens’ initiative. But it’s also important to remember that these skills are what win elections.

We’re taking back our power as voters. That’s something the federal government should think about very carefully as they decide whether to force these projects through our province.