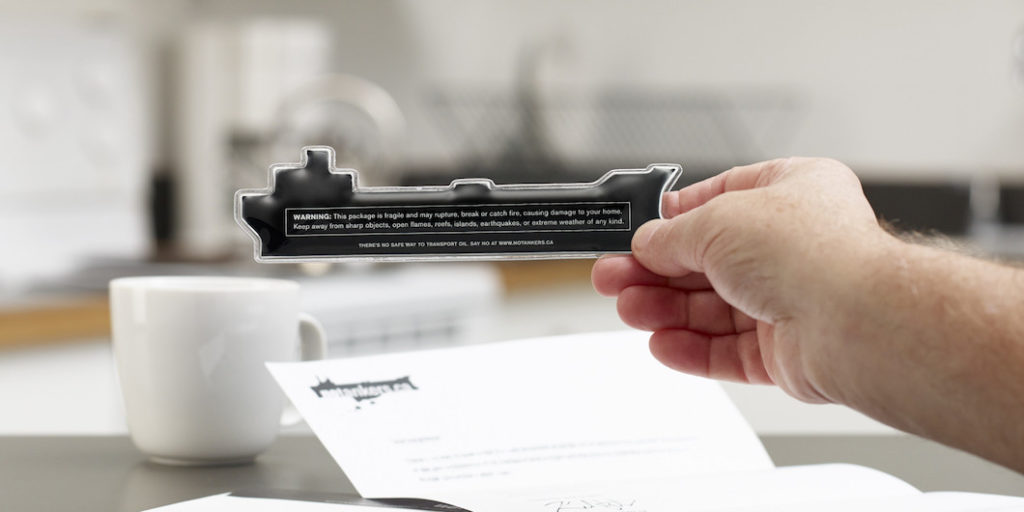 Dogwood Initiative has mailed a provocative letter containing a sample of heavy oil to homes across British Columbia.

Each sample is a take on the traditional direct mail marketing tactic but instead of dish soap, miniature tanker-shaped packs are filled with black, gooey simulated oil. On the back of each sample there’s a disclaimer:

WARNING: This package is fragile and may rupture, break or catch fire, causing damage to your home. Keep away from sharp objects, open flames, reefs, islands, earthquakes, or extreme weather of any kind.

“British Columbians are being asked to assume all the risks of an oil tanker spill, yet we’ve been given no meaningful input into that decision as citizens. With the federal election around the corner, we’re encouraging voters to let their local representatives know that’s unacceptable.”

The stunt is part of Dogwood Initiative’s Let BC Vote campaign, which aims to build support for a province-wide citizens’ initiative on crude oil pipeline and tanker proposals. An initiative would only be triggered if the provincial government signed off on Enbridge or Kinder Morgan’s proposals without the consent of B.C. voters.

Click here to find images for your use of the direct mail piece.