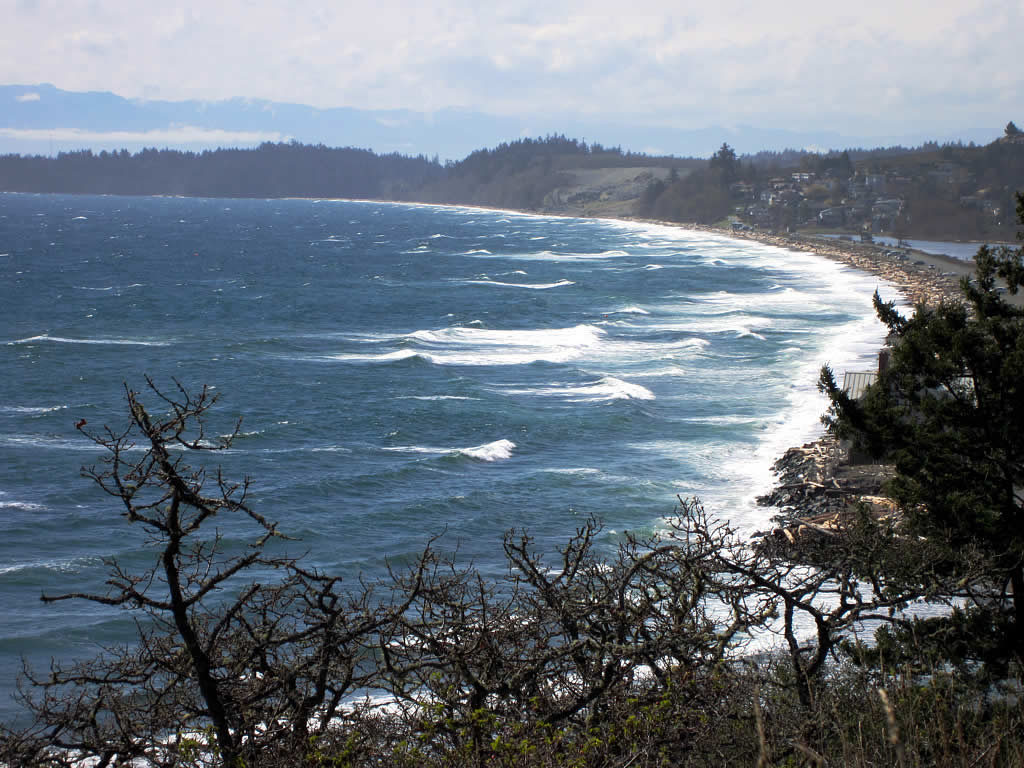 Esquimalt says yes to a B.C. review of Kinder Morgan

Guest writer Terry Dance-Bennink has been volunteering in various capacities and organizing with Dogwood since 2013. She’s also a regular editorial contributor. You can read her profound story about visiting the Alberta oil sands and about uniting various faith traditions for a successful healing walk on our blog page.

What do newly retired Jane Devonshire and 80-year-old Francois Brassard have in common? Well, they’re both described as energizer bunnies and absolute terriers when it comes to stopping reckless oil tanker proposals from threatening our community.

They also have a lot to celebrate this week – and it all started with our focused organizing efforts in last November’s municipal election.

In a historic move, the newly elected Esquimalt municipal council voted unanimously on Feb. 2 for an independent, B.C.-led review of Kinder Morgan and for the provincial government to pull out of the National Energy Board’s (NEB) pipeline review process.

“Having the mayor and council 100 per cent behind us on this motion and knowing that we – the ordinary people of British Columbia – were instrumental in getting these champions of the environment elected… it gave me goose bumps!” Jane told me.

Last August we started our hard work on electing this council, so we already had relationships with Mayor Barbara Desjardins and most of the city councillors. In fact, all of the candidates who scored high on our municipal election values survey were elected with the exception of one. We started firm discussions about the motion just this past January, but building the teams necessary for this success started long ago.

Jane took Dogwood’s two-day training program over a year ago. She became a riding organizer last spring and retired from her full-time job in the summer – much to our delight and benefit! She’s super organized and really cares about the people she works with. She and her team will take a similar approach to adopting the motion with the View Royal council next week, but I won’t be needed (except in the back row cheering!) because coaching new leaders is what Dogwood organizing is all about.

Francois joined Dogwood in May 2014 and has a long history in education. He’s got a very keen, observant mind and is a determined organizer – nothing seems to faze him. He’ll stand outside a mall or the library, go out talking with voters door-to-door and call his volunteers regularly for personal meetings. He’s done a super job recruiting and training volunteers as well as mastering our digital platforms – no mean feat at age 80!

“There are two things that I love about Dogwood: it can focus clearly on a specific environmental issue without ever losing sight of the bigger picture, and I love its organizational style – closely knit, small groups held together by the bonds of friendship. People caring about people and planet. It has energized my life,” Francois says.

To prepare for the motion, Jane, Francois and I met earlier with Mayor Desjardins and most Esquimalt city councillors. With their input, we shaped a motion that could be supported and have established a good working relationship with them all. Similar motions will be tabled soon in Sooke, View Royal, Colwood and Victoria.

When speaking to the motion we cited the deeply flawed and undemocratic nature of the NEB process, which has been castigated by First Nations, a former BC Hydro CEO, MLA Andrew Weaver, the cities of Victoria, Vancouver, Burnaby, New Westminster, Langley and many others.

The NEB’s refusal to publicize Kinder Morgan’s oil spill response plan is just another match in the fire. We’ve encouraged our local MP Randall Garrison, federal opposition critic for public safety, to speak out about the high risk that a single oil spill poses to all B.C. coastal life.

Esquimalt city council has also agreed to forward this resolution to the Association of Vancouver Island & Coastal Communities convention being held in April, to our local MLA Maurine Karagianis as well as MLA John Horgan, B.C.’s leader of the opposition. We hope to see prompt action by the province of B.C.

Building on the success of our municipal election campaign, we’re keen to support champions who defend local decision-making over our land, air and water. Francois, Jane and I are members of the Vote 2015 Esquimalt-Saanich-Sooke steering committee, which will play a major role in making sure a local champion for democracy is elected in our federal riding.

“Through door-knocking, phoning, emails and texting, our Dogwood supporters came out in droves last November and elected municipal champions who share our common values,” Jane said.

“Politicians are starting to listen to us – the ordinary citizens of B.C. Imagine what it will be like when our number of supporters double!”

Dogwood organizer Jane Devonshire and her team are on a roll. After securing Esquimalt council’s support for an independent B.C. review of Kinder Morgan in early February, View Royal council followed suit, and we recently learned that Vancouver asked to see the Esquimalt motion in order to table something similar and it has since passed!