COVID-19 has changed everything. Oil markets are in chaos, and companies like Shell and Total are pulling out of the oil sands. The oil boom is over. But the federal government is ploughing ahead with the Trans Mountain pipeline project, putting billions of tax dollars at risk at a time when we need every public dollar to help Canadians weather the economic storm caused by the pandemic.

The Trans Mountain pipeline will ship oil for 50 years, locking us in to decades of carbon emissions that will make it impossible to meet our climate targets. One major spill of toxic bitumen could devastate B.C.’s priceless coast. And the pipeline is set to bulldoze through the unceded territory of Indigenous communities who have not given their consent.

All this for a project that no longer makes sense. Building a heavy oil pipeline in the post-COVID age ignores science and economics. That’s why more than 100 Canadian economists and energy experts have called on the government to rethink the Trans Mountain pipeline.

Construction is still in its early stages, and billions could still be saved to fund the clean energy projects and green jobs that will build a healthy, resilient economy for all Canadians. 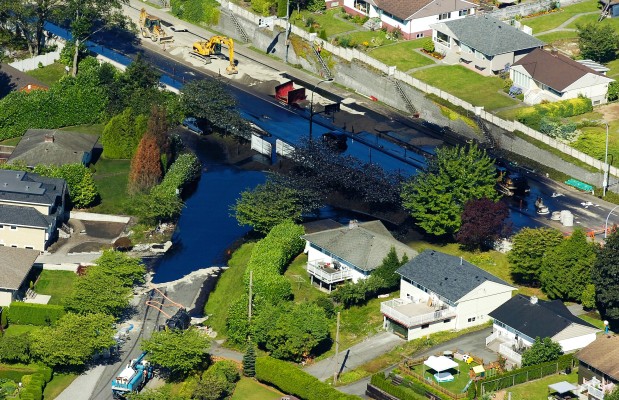 Aerial image of Trans Mountain Pipeline oil spill in Burnaby, covers entire intersection, yards and is next to houses.

The Salish Sea is under direct threat from the Trans Mountain pipeline expansion project. The expansion will bring 400 AFRAMAX oil tankers to Metro Vancouver every year, each loaded with toxic bitumen that would cause an ecological disaster if spilled. Dogwood has organized crucial community opposition to the project, which forced the original corporate backer (Kinder Morgan) to sell off the project to the federal government.

The pipeline expansion project threatens our land and water, our global climate and the unceded territories of Indigenous communities who have not given their consent. We’re working with a broad coalition to put relentless pressure on Ottawa to cancel the pipeline and save billions of taxpayer dollars for clean energy and a just transition.

Tell our Finance Minister to redirect the billions of dollars Canada is set to waste on Trans Mountain into clean energy.

Trans Mountain is under water. Its federal dollars and skilled workforce should be redeployed to build back better after the floods. “It’s going to take a bundle of money.” With that understatement, Premier Horgan announced a new joint federal-provincial committee in the immediate aftermath of November’s catastrophic B.C. floods. The committee is supposed to help […]

Guest blog by Vijay Tupper I’m a sixteen-year-old high school student in Burnaby, B.C. In 2019, I joined the youth climate strikes that brought a million Canadians out into the streets shortly before the last federal election. Now, voters are headed to the polls again as many parts of the country are still reeling from […]

Candidates step up as climate champions as momentum builds ahead of Canadian election Unceded Coast Salish Territories (VANCOUVER, BC) — 125+ federal candidates from coast to coast have pledged to fight to cancel the Trans Mountain pipeline in the next Parliament, as citizens demand more from their leaders during the climate emergency. Thousands of voters […]

Get updates from Dogwood!